Everyone has had one of those nights where you sit around and not really do anything. The minutes and hours on the clock slowly tick away as you find the most thoughtless and juvenile things to do to pass the time. Sometimes it’s because you’re waiting on others to come up with something fun while, in some cases, it’s simply because you really have nothing better to do. Director Alexis Ramirez has certainly been there as he tackles this type of uneventful evening with his short film, Out of Boredom.

Written by Brennan Scott, the film centers on a young woman named Stacy (Caitlyn Geiler). It opens with her checking her phone, as people are wont to do these days, and expressing sarcastically what a fun Saturday she’s having. As boredom takes hold, Stacy passes the time with mindless activities such as doodling, folding paper toys, and making shadow puppets… without the shadows. Eventually, her boredom leads her on a quest of trivial knowledge as she calls numerous customer service lines for some human interaction.

In print, the plot sounds as dull and pointless as Stacy’s evening surely is. However, Ramirez and Scott make this eight minute tale work wonders. As previously mentioned, this is something that probably everyone can relate to. It’s one of those nights where you have no idea what to do and you resort to sitting around and wasting the entire evening. Despite being released back in December, Out of Boredom is especially relevant now with so many people cooped up in their homes due to the COVID-19 pandemic. With many starting to get stir crazy, there’s no doubt that some have resorted to paper airplanes, binging on cookies, and begging for someone to talk to. However, there’s also something oddly satisfying about a night in. Whether it’s saving money, avoiding a hangover, or even a bout of self discovery, a Saturday in the house doesn’t have to be all doom and gloom. 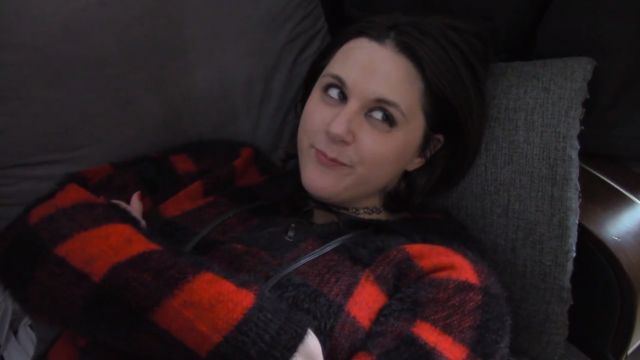 This is most certainly the case for Caitlyn Geiler as Stacy. Through the first half of the film, you’ll find yourself asking if Stacy’s putzing about is all that’s going to happen. For the most part, yes. That’s pretty much all Geiler does for the role. Yet, she appears to have so much fun doing it. Her facial expressions say it all. When she’s in the midst of creating a paper airplane or learning an array of fun facts from customer service representatives, it feels like Stacy’s legitimately having a good time. Once the fun runs out though, her joy turns into sheer boredom until she finds a new activity to engage in. The film is kind of reminiscent of the scene in The Breakfast Club where each of the characters are trying to find ways to burn time during their (coincidental or not) Saturday detention. Over the course of the film’s eight minutes, Geiler does a great job pulling you in and taking you on this strange little day-wasting ride with her.

Of course, Out of Boredom‘s minimalistic approach isn’t without its detractors. The lone setting of the film isn’t stylized or fully explored as previously reviewed shorts like The Knock are. In turn, there’s not much to catch your eye other than Geiler’s bubbly performance. However, the bigger issue is that some viewers won’t be as enthused with Stacy and her need for human interaction as others. The humdrum, childlike dawdling that occurs early on will probably test some while amusing others. For what the film is, it’s not meant to be taken seriously though. It has a type of “appreciate the little things” message that more people need to adhere to. The film’s problems are going to be more personal preference than anything. Therefore, it’s tough to completely fault it since all of the choices seem intentional.

Out of Boredom is a charming piece of short indie cinema. The cast and crew stick to the boredom theme in every regard including the plot, performance, and aesthetics. Yet, Alexis Ramirez still manages to make it fun while Caitlyn Geiler gives an enthusiastic and dynamic performance. The bubbly synth rock soundtrack provided by 80’s duo, The Angelas, certainly helps lighten the mood as well. While Out of Boredom isn’t going to wow anyone with a riveting plot or technical prowess, it’s a rock solid short that won’t have you regretting the time you spend on it.

One Thought to “Short Film Review: Out of Boredom”