Oh boy. Perhaps the only good thing about the pandemic is that viewers didn’t have to be subjected to a new M. Night Shyamalan film. Alas, now that many places are trying to get back to some semblance of normalcy (though recent COVID-19 flare ups appear to be challenging this), that means that long delayed films are hitting the theaters. Normally, this would be a wonderful thing but, again, this is Shyamalan we’re talking about. While moviegoers should be ecstatic that the big screen is back, it’s quite unfortunate that a film like Shyamalan’s Old had to come out at all. Without doubt, it’s easily the worst film released thus far in 2021.

As everyone should know by now, the writer/director’s career has been a bumpy ride at best. After some early successes with The Sixth Sense, Unbreakable, and Signs, people seemed to tire of Shyamalan’s interesting ideas held down by poor storytelling and lame twist endings. Films like The Lady in the Water, The Happening, and especially The Last Airbender, saw his career careening back down to earth very quickly. Though, Shyamalan got lucky with a surprise hit in 2017’s Split. Of course, whatever goodwill that film did was lost in its awful 2019 sequel, Glass, which we ripped apart on this site upon release. Well, Shyamalan has yet to learn anything about his craft since then because we’d argue that his new film, Old, is, surprisingly, even worse than Glass.

The film sees a married couple, Guy (Gael García Bernal) and Prisca (Vicky Krieps), and their two children, Trent (Nolan River) and Maddox (Alexa Swinton), vacation at a “too-good-to-be-true” resort. Behind closed doors, Guy and Prisca are having marital issues which seem to stem from Prisca’s mysterious illness but the couple try to maintain appearances nonetheless. The family is soon part of a select few to be invited to a secluded beach away from the resort. Upon arriving at the beach, things are not what they seem as tempers flare between the small group of guests and, more importantly, the specific beach causes people to age rapidly and doesn’t seem willing to let anyone leave.

Now, it should stated that an interesting plot isn’t a rarity in Shyamalan’s films. On paper, the plot for Old sounds like a lot of fun with a world of possibilities. Over the course of his 20+ year career though, Shyamalan hasn’t quite figured out how to make a good film. Everything that happens in Old occurs at a rapid fire pace where there’s really no opportunity to just sit and appreciate anything the film tries to do. The story is told almost in bullet points where there’s always another event happening immediately after the previous one finishes up. While the gimmick is that the characters basically live out their entire lives over the course of a day, that doesn’t mean that something always has to be happening. After all, they’re still stuck on a beach. 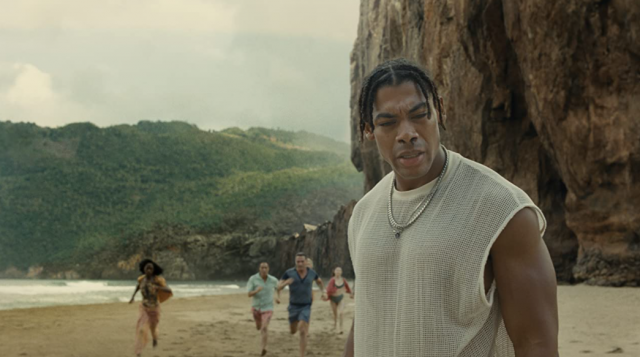 Although Old has a lot of problems (seriously… so many), the biggest one has to be the script. This is a poorly written film from start to finish. The dialogue is simply atrocious. It’s unnatural and just plain stupid most of the time while also being boring with all of its constant naked exposition. Characters don’t talk like real people and everyone’s always explaining who they are and what they’re doing. It’s lazy screenwriting for starters and the only reason it’s fun to watch is because of how bad it really is. There are moments where dialogue comes from someone offscreen which is a dead giveaway that it was more exposition inserted in post-production because of how flimsy the story already was. Honestly, there’s no reason that someone who’s been making films as long as Shyamalan should ever write something this piss-poor. This is a film whose story is told through dialogue instead of through performance and it’s all the worse for it.

This is especially sad given the amount of talent that’s featured in the film. Gael García Bernal gives probably the worst performance of his career as Guy. It’s not his fault because he really does try but there’s no saving this film. Vicky Krieps, who could’ve been considered an Oscar snub for her role in Paul Thomas Anderson’s Phantom Thread a few years back, is awful as Prisca. Not only is her character’s dialogue bad but so is her acting. Stilted and, frankly, just plain weird most of the time, the character isn’t likable and it’s actually hard to sit through most of her scenes. Trent and Maddox are played by a few different actors throughout the film but they’re largely played by Alex Wolff and Thomasin McKenzie respectively after they age into teenagers and beyond. Like Krieps, both of these performances are bad. They both seem to try hard to make it work but there’s no chemistry between anybody in Old and it really, really shows. The only actor who does a relatively good job here is Rufus Sewell as Charles, a fellow beach-goer. In contrast, Ken Leung’s Jarin is easily the worst character of the film but it’s to the point where he’s hilariously bad and you can’t help but laugh at him every time he’s onscreen. To be fair, the script is a huge problem for these actors but still. There’s no reason any of these actors should be this bad. 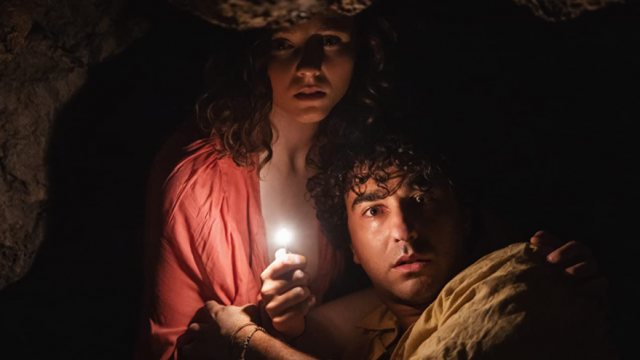 While we already know that Shyamalan can’t write a script to save his life, we actually did praise his filmmaking abilities in our review of Glass two years ago. We said, “M. Night Shyamalan isn’t a bad director but he’s inept as a storyteller.” Well, it looks like we have to take part of this statement back. He’s certainly inept as a storyteller but, with Old, he proves to be a terrible filmmaker as well. Everything from the constant closeup shots, the editing, and the continuity is so bad throughout this film. This is novice filmmaking at best and it’s from a guy who’s been making films for over 20 years. It does appear that there were a number of reshoots probably during the pandemic which could explain some of the inconsistencies. However, that’d also be giving Shyamalan far too much credit. It’s difficult to pinpoint specifically bad moments because, frankly, there are far too many. Despite its serene locale, Old is an ugly film to look at and it’s all because the person at the helm of the production apparently has no idea what he’s doing.

Old is a terrible, terrible film. Every low budget, independent film we’ve reviewed on this site has more passion, heart, knowledge, and ability behind it than this shoddily assembled and overproduced piece of trash. It’s appalling that it’s currently sitting at a 51% on Rotten Tomatoes because that’s far too high. M. Night Shyamalan’s previous film, Glass, was bad but at least it was competently made. This one doesn’t even have that going for it. Old is the worst film of the year so far and has to be among Shyamalan’s worst titles. Stay far, far away.