There are only a handful of filmmakers whose new releases feel like an actual event. Quentin Tarantino, the Coen Brothers, and Martin Scorsese, among others, have consistently released quality work for seemingly their entire careers. One of the biggest directors of the past decade, though, is Christopher Nolan. With the release of The Dark Knight in 2008, Nolan was launched into the stratosphere of filmmaking. Since his work on arguably the best Batman movie ever made, he has pretty much been able to do whatever he wants in Hollywood. Whether he’s navigating the mind in Inception or space and time in Interstellar, there’s always something grandiose about Nolan’s films. The same rings true for his war epic, Dunkirk.

Set during World War II, many are not entirely familiar with the events that took place at Dunkirk. It was a huge success as over 338,000 Allied troops were evacuated from the beaches and harbor at Dunkirk after being surrounded by the German army during the Battle of France. A halt order was given which allowed the Allies time to come up with the plan. 338,226 troops were evacuated from the beaches over the span of nine days with only the German air force as opposition.

Nolan tells the story of the evacuation from three perspectives/locations: the mole (or pier), the sea, and the air. Each also functions on their own time schedule in the film. The mole is over the span of a week with sea and air being a day and an hour respectively. A young British private, Tommy (Fionn Whitehead), makes it off the streets of the abandoned city of Dunkirk and onto the beach. Here, he meets Gibson (Aneurin Barnard) and the two attempt to use a wounded man to get themselves passage on a ship ferrying the injured from the beach. They befriend Alex (Harry Styles) and the three spend the bulk of their story trying to escape from Dunkirk by any means possible.

The second perspective follows Mr. Dawson (Mark Rylance), his son, Peter (Tom Glynn-Carney), and tag-along, George (Barry Keoghan) as they sail to Dunkirk to help evacuate troops. They discover a soldier (Cillian Murphy) sitting on top of the wreck of his ship which was previously destroyed by a German U-Boat. They clash with one another as the soldier tries to convince Mr. Dawson to turn around and go back home. The final perspective is centered on three Spitfire pilots with Farrier (Tom Hardy) being the main focus. Their task is to defend the evacuation from the sky and take down any German Luftwaffe planes. 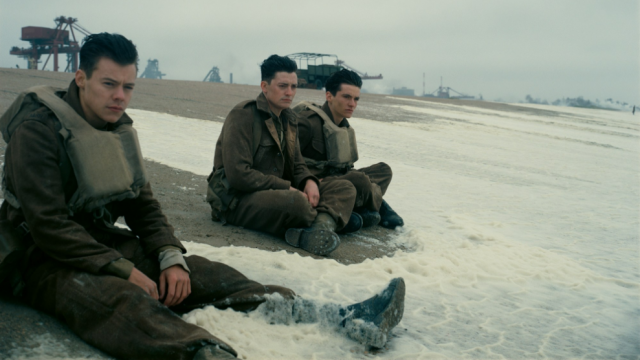 While the three perspectives may sound confusing, Nolan does an excellent job of blending the three separate stories into one cohesive experience. Initially, you may be slightly confused but, as you begin to see similarities in events, it’s easy to pick up on the storytelling mechanics. Nolan is no stranger to time manipulation as he has featured it heavily in his films Memento, Inception, and Interstellar. Though, Dunkirk is different. Time isn’t altered or used to necessarily trick the audience. It’s a vehicle to tell the story from multiple viewpoints in a time of crisis. It’s very efficient and helps maintain suspense for the film’s entire runtime.

Speaking of suspense, that’s also one of the best things about the film. From start to finish, there’s an intensity that keeps you on the edge of your seat. The constant trials and tribulations of all three perspectives ensure that there’s always a sense of drama and dread. A lot of that also has to do with Hans Zimmer’s score. Seemingly, there isn’t a single time when Zimmer’s tense music isn’t pouring out of the theater’s speakers. Like Edgar Wright’s Baby Driver, the use of music is exhausting but in the best way possible. It’s not overbearing but it consistently enhances the events onscreen. There are times when the music is very low and subtle as a gunshot pierces by and nearly strikes one of the characters. Aurally, the film is a masterpiece. 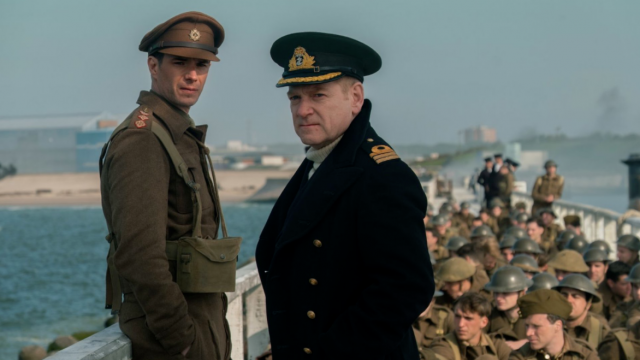 The characters, often not a strong suit in Nolan’s work, aren’t a highlight but they work for the film. Unlike a lot of Nolan’s scripts, Dunkirk really doesn’t have a lot of talking. Normally, especially in his two most recent movies, Nolan has his characters recite a lot of naked exposition. The rules of the world we’re experiencing is told to us in dialogue. With this film, though, it’s easy to understand what’s happening with very little exposition. Characters like Commander Bolton (Kenneth Branagh) and Mr. Dawson may explain their plan but they don’t need a ton of detail. While films like Inception and Interstellar may need to be partially explained, it’s a relief that Nolan scaled back on excessive dialogue and let the action onscreen do the talking.

For lack of a better term, Dunkirk is great. It may even be fantastic. Like a lot of Christopher Nolan’s work, this is a film that you immediately want to see again. With the time manipulation aspects and intensity of the first viewing, another go-round will let everything sink in more. The only real complaint about it is that the ending feels a little abrupt. After so much buildup and suspense, the ending comes too quickly. Regardless, this is a different kind of war film. It’s not about explosions and death, though there’s some of that too, it’s about the unheralded aspects of war. Dunkirk was not a victory for the allies but it certainly was a miracle. As for the Nolan film, it’s very, very good. With another viewing to digest, it could be even better.