It wasn’t all that long ago that writer/director Rian Johnson appeared to have Hollywood in the palm of his hand. After the huge success of the J.J. Abrams-helmed Star Wars: The Force Awakens, other filmmakers were set to have a crack at the billion dollar franchise. Both Gareth Edwards and Ron Howard directed spin-off films but Johnson was actually gifted the eighth installment of the main saga. Though, it was the release of Star Wars: The Last Jedi that also had Johnson careening back to Earth due to a shockingly underwhelming sequel. All may not be lost as Johnson returns to the big screen with something that seems a little more his speed in his wildly entertaining whodunit, Knives Out.

Prior to The Last Jedi, Rian Johnson had built up some goodwill in the film community. His feature length debut came in the form of his 2005 neo-noir high school detective drama, Brick. Arguably, that film still remains Johnson’s best work to date. He followed up Brick with the middling The Brothers Bloom in 2008 and the acclaimed Looper in 2012. Johnson even directed three episodes of AMC’s Breaking Bad before tackling his vision for Star Wars. Even though The Last Jedi was polarizing for fans and critics alike, it still landed Johnson with an untitled Star Wars spin-off trilogy set for future release. Ultimately, no matter what you have to say about Rian Johnson, he’s a very capable filmmaker and cinematic prowess is even more clear with this newest release.

Knives Out focuses on the eccentric Thrombey family following the mysterious death of its wealthy patriarch, Harlan (Christopher Plummer). Initially labeled a suicide by the local authorities, private investigator Benoit Blanc (Daniel Craig) is hired by an anonymous figure to investigate Harlan’s death. Blanc meets a greedy and self absorbed cast of characters who all have their own potential motives for wanting Harlan dead. Among these are Harlan’s eldest daughter, Linda (Jamie Lee Curtis), his youngest son and CEO of his publishing company, Walt (Michael Shannon), his freeloading daughter-in-law, Joni (Toni Collette), and his playboy grandson, Ransom (Chris Evans), along with a handful of other family members. As he sifts through suspects, Detective Blanc recruits help from Harlan’s nurse, Marta Cabrera (Ana de Armas), who perhaps has more knowledge than she initially lets on and proves incapable of lying.

For anyone wondering what a whodunit is, it’s a complex detective story in which the perpetrator of the film’s crime isn’t revealed until the end of the story. In 2019, classic whodunit stories are mostly a thing of the past. Sure, 2017 saw the release of the fourth(!) iteration of Agatha Christie’s novel, Murder on the Orient Express, and tension filled murder mystery/thrillers will always have a place in Hollywood. However, Knives Out is something different. It’s more along the lines of the 1985 cult classic Clue or film noir staples like The Maltese Falcon and The Big Sleep. With its massive ensemble cast and use of comedy, it feels like something from a different era and the marketing for the film pushed it as such. 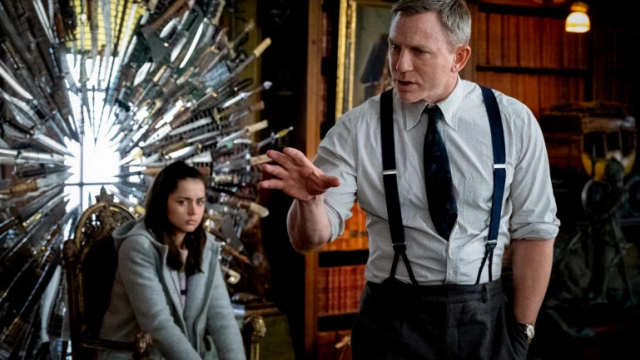 Speaking of the cast, it’s one of the film’s best attributes. Every trailer for Knives Out has focused largely on the cast and, luckily, everyone gets time to shine in the final product. Viewers are led through a twisted web of lies and deceit by Daniel Craig’s Benoit Blanc and Ana de Armas’s Marta, Blanc’s appointed Watson to his Sherlock Holmes. Both Craig and de Armas are great together despite being complete opposites. Craig, an English actor, employs an almost comical southern drawl throughout the film and it’s sometimes safe to wonder if he’s impressively smart or just unbelievably lucky as a sleuth. Ana de Armas as Marta is a soft spoken personal nurse who finds herself in a tough situation as the sidekick to Blanc.

Then, you have all of Harlan’s family members. After her return as Laurie Strode in 2018’s Halloween, Jamie Lee Curtis lands a prominent role in the Knives Out family here. Toni Collette continues to impress since her defining role in last year’s Hereditary as the aloof Joni. Chris Evans takes on a unique role following his swansong as Captain America in the Marvel Cinematic Universe and leaves a lasting impression. Katherine Langford finds herself in a similar situation following her role as Hannah Baker in the horribly misguided Netflix drama, 13 Reasons Why. Yet, she proves to be a capable actress with her best work still ahead of her. Michael Shannon and Christopher Plummer put in their usual solid and complex performances as the two screen veterans that they are. Needless to say, there really isn’t a poor casting decision throughout the entire film. Outside of Craig and de Armas, the one person that tends to steal scenes is actually Don Johnson as Linda’s sleazy husband, Richard. He’s just ridiculously funny and likable in his unsavory ways. 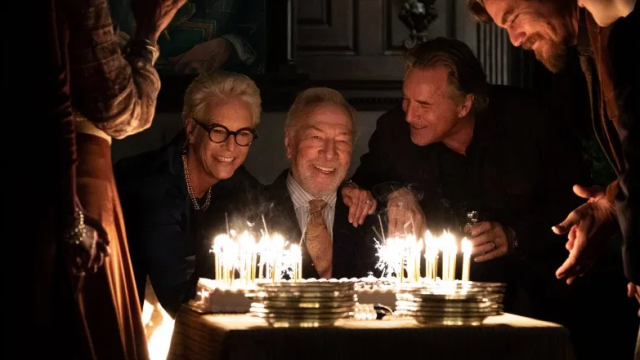 After such a bland and lifeless effort with The Last Jedi, Rian Johnson certainly doesn’t skimp on intriguing storytelling and fun throughout Knives Out. Over the course of the 130 minute runtime, you’ll find yourself paying full attention to every single thing that’s happening. Johnson leaves plenty of clues and hints around for viewers to pick up on to make them feel like part of the story. Constant misdirection and even some early revelation turn the film on its head but it still strings you along. The film’s dopey characters keep the laughs coming and put them in hapless situations that they must weasel their way out of. It may often remind viewers of Johnson’s previous work on Brick which was a somewhat serious detective story but still had splashes of comedy that would make the events happening feel absurd. There’s a dry humor in the filmmaker’s work that was sorely missing in his Star Wars flick and it’s great to see some of his artistic flair return here.

Since we can’t really get too much into detail over the film’s mystery, all we can really say is that Knives Out is some very solid, if slightly unspectacular, cinematic fun. The biggest criticism of the film is probably in its ending. While it’s not bad, Craig’s Benoit Blanc straight up explains Harlan’s death step by step in the film’s climax. Yes, this is a tactic used in other whodunits so it’s a logical choice for Johnson to make in his script. Though, such an inspired piece of filmmaking feels like it deserves a better reveal. Regardless, Knives Out is wholly satisfying in execution. With its impressive cast, humor, and a reinvigorated director at its helm, Knives Out is some of the most fun you can have at the movies here in late 2019.

One Thought to “In Theaters Review: Knives Out”