We’re at that strange time of the year when it’s a barren wasteland for new theatrical films. Nestled in between the holiday releases and the ramp up towards the Oscars, there’s the “dump month” of January. In a type of mercy kill, films with lowered financial and critical expectations tend to come out at this time. When it comes to Jeffrey Nachmanoff’s new science fiction thriller, Replicas, it’s not hard to see why it was released here.

Unlike a number of films reviewed on this site recently, Replicas isn’t Nachmanoff’s first foray into feature length filmmaking. Though, his releases have been a bit scattered. His debut feature, Hollywood Palms, was released in 2001 with his second film, Traitor, following in 2008. Nachmanoff has mostly worked in television since then. The screenplay for Replicas was written by Chad St. John from a story by Stephen Hamel. St. John has been responsible for both London has Fallen and Peppermint, both of which were critical flops. With the reemergence of the sci-fi genre in recent years with films like Ex Machina, Arrival, and Blade Runner 2049, Replicas has some stiff competition from its contemporaries.

The film follows William AKA Bill Foster (Keanu Reeves), a scientist obsessed with mapping neural pathways in the human brain to replicate and insert into a fully synthetic brain. Upon receiving a recently deceased soldier, William quickly maps his brain and injects the memories into a host body. The process initially appears to work before the host panics and rips itself apart. William’s boss, Jones (John Ortiz), is unhappy with the results and tells him they need a successful trial otherwise the company, Bionyne, will be shut down. At home, William, his wife, Mona (Alice Eve), and their three children plan to go on a boat trip. Though, William ends up crashing the car during a thunderstorm and kills his entire family in the process. With the help of his colleague and friend, Ed Whittle (Thomas Middleditch), William extracts the memories of each of his family members, clones them, and inserts the memories into the clones. Though, with only three pods for cloning, William can only clone three of his four deceased family members.

Honestly, revisiting the plot of Replicas is maddening in itself. The short version of the story actually has a lot of promise as a sci-fi thriller. Creating neural pathways and uploading them into a host body, particularly an entire family, is an interesting idea. It’s not completely original as other properties like Westworld and Inception both toy with memory with Westworld specifically using humanoids as hosts. Though, with Replicas, the plot is too coincidental. Somehow William is able to survive a car crash while his entire family dies. Then, Ed just so happens to know how to clone animals but has never cloned a human. He and William easily clone three successfully. With sci-fi, sometimes you have to suspend disbelief but not when it’s this ham-fisted and nonsensical. The story in general is like something a grade-schooler would write. 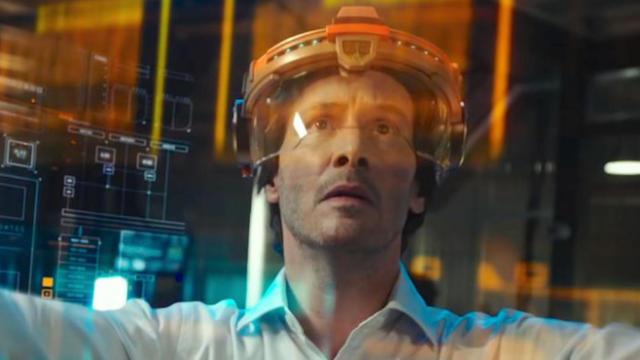 While the plot at least has some slight intrigue even with the poor execution, good performances from a cast can mask some of a film’s deficiencies. That is NOT the case with Replicas. The acting is awful across the entire board. Keanu Reeves, who’s excellent in the recent John Wick series and has turned in some solid performances over his career, just isn’t believable in the role of a brilliant scientist. At one point, Thomas Middleditch’s Ed says that he and William are in way over their heads. That’s the case for their acting as well. You can tell that Reeves does try to salvage what he can but it simply doesn’t work. Speaking of Middleditch, you may have seen him in recent Verizon commercials. Well, he plays basically the same character in Replicas that he does in the commercials. Even Alice Eve’s Mona feels more like a character out of Pleasantville than someone viewers are meant to sympathize with.

All of the blame cannot be placed on the cast for their lack of connection with each other or the audience though. That blame can be placed on the script itself. The dialogue is so unbelievably bad throughout the film. It’s difficult to comprehend how a script this bad ever got the go-ahead. People simply don’t talk like the characters do in this film. It’s some of the most cliched and bland dialogue you could possibly think of. It actually becomes somewhat humorous at times. When Keanu Reeves says, “I spy with my little eye…” in the middle of the pouring rain, it’s hard not to roll your eyes and laugh to yourself. In addition, William frequently says out loud that once his family is cloned, everything will be fine. Sure. Other than his real family being dead and being able to only clone two of his three children, everything will be great. Again, it’s appalling that this specific script ever made it onto the big screen. 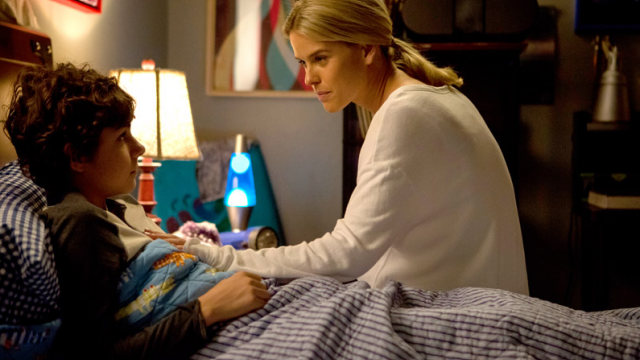 Perhaps the biggest issue with Replicas is that it never stood a chance due to not knowing what it wanted to be. There are so many different ideas wrapped up into one terrible film. Initially, the film seems like a straight science fiction thriller. Then, it turns into a sort of family drama. There are even a few bits of horror sprinkled in which would’ve been a completely suitable route to go. There’s also the buddy comedy aspect with William and Ed cracking dry jokes with one another despite the dire circumstances. Of course, you can’t forget some of the most generic, conspiracy driven action of the past decade for good measure. It also has some of the worst CGI you’ll ever see in a 21st century theatrical release. The film tries to be so many things and, frankly, isn’t good at any of them.

If there’s anything positive to say about Replicas, it’s that it’s so bad that it’s actually slightly entertaining. That’s not to be mistaken with, “it’s so bad, it’s good,” but it will definitely make you chuckle at times. It’s like a bad joke that makes everyone in the room disgusted for laughing at it. For a veteran actor like Keanu Reeves, the film is an embarrassment and probably one of the worst of his entire career. He even has a producer’s credit which means he’s partly responsible for getting this dreck made. The film lacks direction at every conceivable level and, like the one that killed William’s family, Replicas is a cataclysmic car crash of a motion picture.