When most people think of films in the horror genre, blood, gore, and killing often comes to the forefront. Sure, the mind may immediately gravitate to films like The Exorcist, Halloween, and A Nightmare on Elm Street when thinking of horror but the genre is much more expansive than that. In some cases, a film’s horror aspects may come more from situations or predicaments that characters may find themselves in. It may also come from within. Abe Goldfarb’s debut film, The Horror at Gallery Kay is a perfect example of a different type of horror.

The plot sees Petra (Maine Anders) and Olive (Rosebud), a lesbian couple, seeking couples counseling after their recent breakup. Upon arriving at Dr. Claremont Bozill’s (Brian Silliman) office after hours, Petra begins to vent as she doesn’t believe their relationship can be saved. Olive, on the other hand, had an epiphany while visiting an art gallery, Gallery Kay, and optimistically begged Petra for the counseling. Eventually, the therapy session reopens wounds and memories while revealing the existence of a hidden world.

For the purpose of this review, the plot will be kept somewhat vague as viewers can sort of twist it into what they believe the film is trying to say. Be assured that the film is saying something. Before we delve into that, though, let’s discuss a few of the other positives throughout the film. Firstly, the acting is top notch. There are only four characters in the entire film with Petra, Olive, and Bozill being the three main ones. Maine Anders as Petra probably gets the most dialogue of anyone and does a great job with it. It never feels like she’s reading from a script even during some of her lengthier speeches. Brian Silliman’s Bozill is mostly there to react to Petra and Olive’s predicament. Later, he does add a little comedy as well with his frantic vulgarity. Rosebud’s Olive is arguably the most complex character as she goes from childlike to deathly serious and, finally, to almost an emotional shell of herself. Even Kristen Vaughan’s Receptionist has some very memorable, yet strange, contributions. 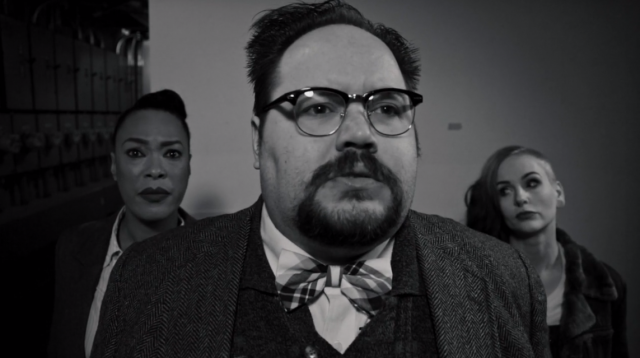 Technically speaking, The Horror at Gallery Kay is mostly pretty sound. Although you can tell that the film is low budget, the black and white color scheme does wonders to mask this. It gives the film a trendily artsy look. However, it perfectly fits with the story and overall feeling of the film as well. The music from Jean-Luc Sinclair is also a highlight. At times, it feels like something off of the instrumental Ghosts I-IV album by Nine Inch Nails or some of frontman Trent Reznor’s film score work with Atticus Ross. The lone technical downfall in the film is that some of the recorded dialogue in Bozill’s office has an echo. It’s not terrible but, since the rest of the film sounds quite good, it’s definitely noticeable in those early scenes.

It’s quite evident that there were a number of influences on The Horror at Gallery Kay. The film is sort of structured like a Quentin Tarantino or Robert Rodriguez work as there’s a lot of dialogue early in the film that devolves into something a little more primal by the film’s climax. A Tarantino influence especially shines through with Petra’s initially witty dialogue. Yet, it doesn’t feel as if Goldfarb and screenwriter Mac Rogers are necessarily ripping anything off either. When bundled with its surrealist horror and overall feel, The Horror at Gallery Kay hearkens back to films like David Lynch’s Eraserhead mixed with John Cassavetes’ Faces. Similarly, interpretations of the film may differ in the same way people debate Eraserhead. Of course, Gallery Kay isn’t anywhere near as bizarre as Eraserhead with some of its ideas relating more to something like Lynch’s Blue Velvet or Twin Peaks instead. 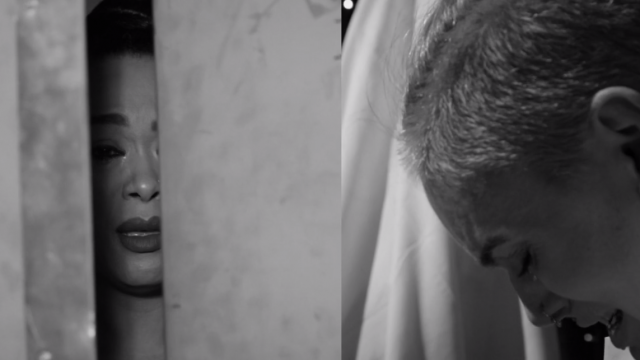 What really makes this film worth a watch is in its portrayal of a failing relationship. Again, this can be left up to interpretation. There’s no disputing that the film does tackle some heavy issues that people who’ve been in doomed romances can relate to. In Petra, you have a person who’s dead set on her relationship being over and despising any aspect of it. On the other hand, you have Olive who doesn’t want to let go of the fairy tale. In the middle, Bozill is like a voice of reason asking the hard hitting questions. Ultimately, the film can be broken down into the simplest terms of decision making. Olive and Petra act as the pros and cons with Bozill as the line splitting the two. There’s certainly a lot of emotion and psychological torment that the two leads go through. For anyone that has been through anything like this, this is where the film’s true horror lies.

Overall, The Horror at Gallery Kay is a very intriguing and emotionally deep story. It does take a little while to get to the proverbial meat of the story but, once you do, you’ll find yourself running the gamut of anger, compassion, grief, and remorse just as the characters do. While there are some brief moments of gore, the horror in the film stems more from the characters having to face their own harsh realizations and truths of their relationship. In short, this is a psychological horror film as opposed to the more traditional monsters and death kind. At a brisk 79 minutes, there’s no reason for fans of horror, drama, or independent film to overlook The Horror at Gallery Kay. No, it’s not perfect and the beginning is a bit long winded. By the film’s end, however, there are plenty of questions, feelings, and interpretations to keep you coming back to this one.

*The Horror at Gallery Kay is currently available to rent or buy on video-on-demand sites like Amazon Prime. It’s also available to stream for free for Prime members at this location.*