We’ve mentioned countless times on this site how the present and future of horror appear to be in good hands. With filmmakers like Ari Aster, Brandon Cronenberg, and Mike Flanagan putting out quality work, the genre is certainly in the midst of a revival. We’ve also heaped a lot of praise on short horror filmmakers but maybe haven’t given enough credit for their importance. YouTube channels like Alter and Crypt TV provide new horror shorts weekly as outlets that prove the genre is alive and well. Some of the previously reviewed short films on this site like Slapface, The Knock, and Wicca Book are also perfect examples of what keeps genre fans coming back to horror. Today, we add to our string of high quality horror shorts with the “bite sized” new film from Dan Gitsham and Sophie Mair entitled Bill.

Bill centers on a woman, referred to simply as She (Roxana Vilk) per the film’s IMDb credits, who aims to make contact with her dead husband. For this, She turns to the dark arts to reunite with her lost love. Upon finishing the simple ritual, She seems to have resurrected something. Though, that something may not exactly be her husband as was intended.

Just like some of the other “micro” shorts like Denial, H-24, and The Mannequin that we’ve covered on Cinema Smack, simplicity is king. Gitsham and Mair make the most of atmosphere and thrills throughout the three minute runtime of Bill. This is in large part because the inspiration for the film came from the supposed ghost that the couple’s two sons were talking to in their ceiling. The eeriness of the real story definitely comes across well within the confines of the film. The filmmaking duo relies on classic horror tropes like flickering lights, doors creaking, suspenseful music, and sound design from Dave Colebrook to keep viewers on edge. Additionally, they add in an effectively creepy plot device with a picture of She’s deceased husband, Bill (Hugo Stanbury), that keeps changing as a form of communication between the two. 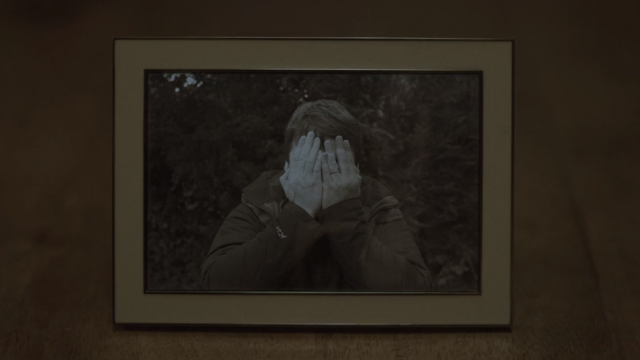 With only three cast members, of which two appear in live action, Bill doesn’t feel barren or lacking. Of course, Roxana Vilk’s She is the main character leading viewers through the film’s events. Vilk is superb in the role as you immediately understand her motivation. In the span of only three minutes, Vilk conveys sadness, hope, joy, and fear based on her interactions with her late husband. Hugo Stanbury appears as Bill only in still photographs. While we can’t really gauge Stanbury’s acting ability based on stills, Gitsham and Mair’s usage of the photos help make Bill feel like a legitimate character. Chris Bianchi also plays a role but we won’t give it away here. Regardless, Bianchi is solid in his brief appearance as well.

Along with the brief and satisfying horror tale, Bill is very well made too. The film looks and sounds great with nice shots, patient camerawork, and more of that effective sound design from Colebrook. From the very first shot where the contents of a wine glass sparkle mysteriously, there’s an otherworldly aura to Bill. The excellent camerawork enhance this by capturing supernatural occurrences in unique ways. The strange goings-on aren’t necessarily anything new but they’re used perfectly. For example, there’s an excellent rack focus from She to a creaky door opening by itself that just oozes the feeling of classic horror. Gitsham and Mair themselves describe the making of the film as a do-it-yourself, self funded short. Their goal was to shoot the film in their own house with their own props in just one day. In all honesty, it’d be hard to find a film that’s more efficient than Bill given these constraints.

The word that keeps coming to mind when discussing Gitsham and Mair’s Bill is “effective.” Everything that the filmmaking duo tries in the film works so well. Again, there’s really nothing new or groundbreaking about the story they’re trying to tell. Yet, it’s all done with expert proficiency. We highly recommend checking out their website for their company, Sketchbook Pictures, too. The other shorts on the site are just as intriguing as their work on Bill. After viewing this newest film, it makes you wonder what Gitsham and Mair could do with a feature length production. Luckily, we may not have to wait much longer as they’re developing their debut feature, Ginger, with the British Film Institute. If the couple’s outstanding work on Bill is any indication, the upcoming feature should be one the horror community should keep a watchful eye on.