In a genre that has often been shunned by casual moviegoers, it’s always great to see horror taken seriously. Whether it’s a well promoted theatrical releases like The Invisible Man and A Quiet Place 2 or an independent gem, good horror is always a positive for cinema in general. The genre especially gets quality representation on the indie and short film scene as we’ve documented numerous times before on this site. In the case of Vahagn Karapetyan’s Wicca Book, we have another unique horror experience in the form of a short Greek horror series focused on the same cursed book and its effects on the people that hold it.

The series, assembled here into one 22+ minute short film, is comprised of three brief segments. Each segment centers around the same Wicca book, the book with which the devil plagued mankind with suffering. The first focuses on a Man (Christos Diamantoudis) who opens his apartment door to find the book on the ground with a note on it saying, “It’s yours.” He soon realizes the book’s power and aims to destroy it. The other two segments follow a young woman named Mia (Kika Zachariadou) who discovers the book in a cave. She too realizes its power and, in the final segment, tries to return it to where she found it.

The plot itself is pretty standard but there are a lot of directions for Vahagn Karapetyan to go with it if he wants to revisit this story. The idea of a cursed book who haunts its wielders will certainly remind viewers of Sam Raimi’s Evil Dead movies as well as the television show, Ash vs. Evil Dead. Though, Wicca Book is more in tune with Fede Alvarez’s 2013 remake that leaves out the comedy of Raimi’s films. Karapetyan’s series focuses on witchcraft which is something often done in horror but also a topic lacking a definitive vision. Films like Suspiria (both the original and remake), 2013’s The Lords of Salem, and 2016’s The Witch have offered their own takes and Karapetyan’s tale is somewhere along these same lines. There are a lot of questions left unanswered and Wicca Book will leave you craving more mostly in a good way. 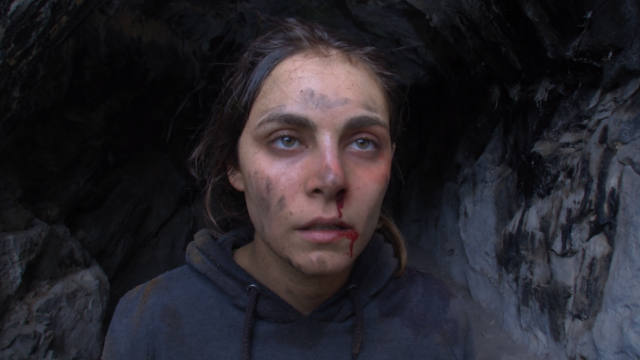 Surprisingly, the 22 minute short actually doesn’t have any dialogue so the film really lives and dies by its characters, visuals, and audio. There are only a handful of characters but everyone does a great job here. Christos Diamantoudis opens the film as a recipient of the book who quickly discovers its evil. His portion sets the tone going forward and get you acquainted with what the book is capable of. Kika Zachariadou’s Mia takes over from here and she’s great in the role. Her facial expressions are spot on for the duration of her segments as she shows fear, yet also a fascination and need for understanding of the book. Mia is a quality protagonist that keeps you invested as you’re unsure of her intentions or her backstory. Is she actively searching for the book? Does she want to absorb its power or destroy it? There are plenty of opportunities to speculate based on her actions and interests but no real answers. This is a character that there’s a complexity to despite having zero dialogue which is a feat in itself. Hopefully, Karapetyan isn’t done with this character and we can learn more about her in the future.

The technical aspects of Wicca Book are worth praising as well. The film looks and sounds great. It opens in an apartment and, similar to The Knock, another recent horror short reviewed on this site, Karapetyan does a great job exploring the space. In such standard locations, sometimes filmmakers just use their location as a backdrop for the actors. Here, the location feels interesting and real. Karapetyan and his cinematographer, Nick Kaltsas, play with color and great camerawork to enhance the experience. There’s also some chilling and suspenseful music from Christoforos Koutsodimos along with some eerie sound effects which seem to emanate from the book. Speaking of which, the illustrations in the book are excellent and only add to the creep factor of the film and its mystery. 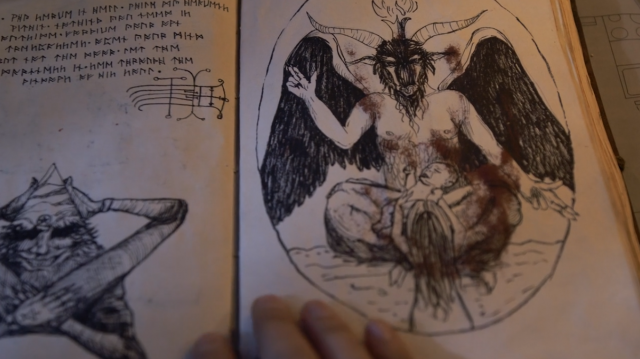 There are some negatives but none of them backbreaking. As previously mentioned, there’s no real definitive witch story in the horror genre, despite some very good ones, and Wicca Book doesn’t feel like it reaches that level either. It combines elements of some of the aforementioned films and does so quite well. Yet, it doesn’t necessarily bring anything entirely new to the table either. The major issue, though, is with some of the film’s cave scenes. The opening in the apartment is very clean and stylized whereas the cave often feels like just a set. This could be a location issue or time constraint that cause some of the ending scenes to feel rushed. Luckily, none of the scenes are bad but they just lack some of the polish of the earlier ones. Again, it seems like there may have been some kind of limitations for the cave which is unfortunate but not a death knell either.

Overall, Wicca Book, either as a horror series or a short film, is an entertaining and thrilling experience. Although it probably won’t scare anybody, there’s some eeriness and a legitimate horror tone throughout. Karapetyan takes the subject matter seriously while aiming to tell a good story in the absence of character dialogue and succeeds in doing so. When it comes to witchcraft in horror, Wicca Book isn’t the new standard bearer but it’s a quality title that should leave genre fans wanting more. Additional backstory for the characters and some history on the book itself would maybe be interesting routes to go if it were to continue. Hopefully, Vahagn Karapetyan has more up his sleeve for this story in the near future.

Check out the trailer for Wicca Book below.