On this site, it’s a rarity for us to praise any type of standard romances. Just last year, we released a pieced entitled Cinema Smack’s Top 10 Doomed Romances. On film, we tend to like our relationships, dark, tumultuous, and strange. In that regard, a new short film was recently released by first time writer/director Yalan Hu entitled Doll It Up. With its uncomfortable story and quirky comedy, the film is right up our alley.

Doll It Up stars Cinema Smack favorite Timothy J. Cox as Gunther, a man whose marriage to his sex doll, Natalie, is on the decline. After Natalie deflates, Gunther purchases a new doll, Dorri, who he quickly becomes enamored with. As life with his new partner spices up, tempers flare and Gunther casts Natalie aside. Though, there may be something else going on with Dorri that Gunther isn’t initially privy to.

Of course, some viewers may be thrown off from the get-go by a man’s marriage to his sex doll. Yes, it’s odd but the film plays it so straight faced with only underlying comedy. That may be the most important thing to remember while watching the film. It’s supposed to elicit laughs. There’s no doubt that some may be upset by what the sex dolls represent and how they’re portrayed throughout the film. To Gunther, Natalie is a throwaway once he upgrades to something better. Again, though, the playfully serious tone makes the situation all the more humorous and enjoyable.

Now, this doesn’t mean that the film has nothing to say either. It certainly pokes fun at the idea of men always being on the lookout for an upgrade. In the same way one person may interpret females being nothing but playthings in the eyes of men, the male characters are also portrayed as cliched sexist pigs. Whether it’s Cox’s Gunther, Devin Craig’s delivery man, or Wayne DeBary’s hobo, the three contend with one another like animals for the dolls. Even Jeff Mandel’s Suit Man throws away his partner in a very funny cherry-on-top moment at the film’s conclusion. Sadly, these moments are in a type of “it’s funny because it’s true” category in regards to how some men view women.

As always, Timothy J. Cox is outstanding as Gunther. Cox always finds a way to be one of the most memorable characters in nearly every film he’s in regardless of the size of his role. As the lead in Doll It Up, he’s completely believable in every scene. He cherishes his partners and, even though he’s throwing one away for something better, you still can’t help but like him. He does a great job getting viewers to buy into his performance opposite an inanimate object. You’re invested in the conversations he’s having despite him receiving no responses from the dolls. He also does a great job with nonverbal communication through facial expressions and gestures. 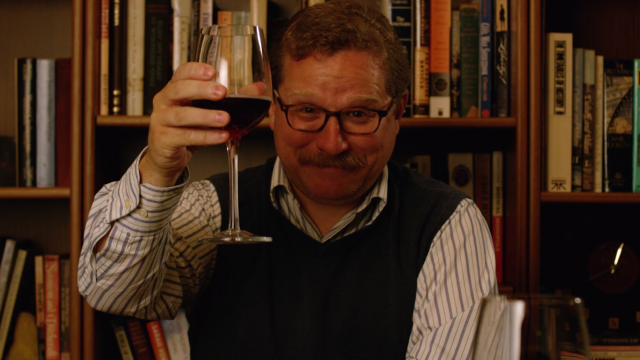 In addition to the off-the-wall story, good performances, and fun comedy, Doll It Up is technically sound as well. The camerawork and look of the film is superb. Every shot is well crafted and perfectly contributes to the story that the film is trying to tell. The same can be said for the editing. Alongside Yalan Hu’s writing and direction, cinematographer Bailey Liu, editor Yue Zhao, and production designer Jonah Johnson all deserve praise for maximizing Hu’s vision for the film. Lastly, the accordion music fits perfectly with the overall tone and is cued up in all of the right places.

When all’s said and done, Doll It Up is a wonderful little short film. At a brisk six minutes and twenty-one seconds, it leaves you completely satisfied. In its brief runtime, the character of Gunther runs through a gamut of emotions and it feels like there’s a lot that happens without being crammed in. Sure, there may be people that don’t appreciate some of the generalizations of men or women depicted in the film. Yet, the generalizations are the beauty of it. Yalan Hu shows that she isn’t afraid to poke fun at some of these things and simply craft an enjoyable piece of cinema. Whether you’re a viewer looking to overanalyze or just sit back and enjoy something, Doll It Up should certainly scratch the itch.