Back in July, we reviewed a short film called All Over Again from first time writer/director Joseph McGovern. In his debut, McGovern demonstrated his talent as a filmmaker and an understanding of how to tell a story. Highlighted by a great musical performance, All Over Again was an enjoyable short film that maybe tried to do too much while running a tad bit long. Now, McGovern returns with his sophomore effort, Hush. For this film, McGovern takes a darker turn by providing an uncomfortable, surreal, and concise story about lust and desire.

Like McGovern’s previous film, the story of Hush is simple. It’s a film all about desire and the male gaze. In his fantasies, Jeremy sees Suzanna dressed in lingerie and teasing his lust for her. There’s a red hue in these scenes indicating a sensual and seductive setting. As has been the case for too long, women have been treated as objects of desire in media and entertainment. Thankfully, this has started to go to the wayside a bit with things like the Harvey Weinstein sexual abuse scandal and the #MeToo Movement. There’s no doubt that this is something that served as an influence for Hush and its story is relevant here in 2018. 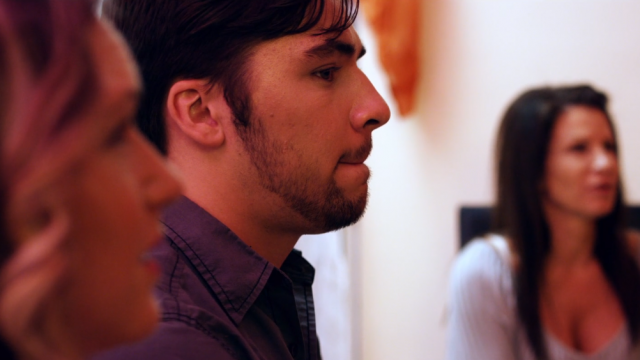 That being said, Hush remains unbiased in its approach. It’s a film with a worthwhile message to discuss as opposed to being something hurtful designed to attack anyone in particular. As the film begins, you’re unsure of what to make of Jeremy’s fantasies. Are they a flashback to a time when he and Suzanna were together? Do they have a secret relationship on the side? There are many questions you can ask early in the story. Regardless, there’s no doubt that Jeremy has some deep seeded issues as he’s hardly able to look at Suzanna in a non-suggestive way. The other men in the film, Mark and Danny (Marion Tention), are portrayed as being completely normal and caring. Again, Hush isn’t just a piece that singles out men as deviants either.

The acting all around is pretty good throughout the film. Most of the scenes consist of Jeremy and Suzanna but both Anthony Scanish and Melissa Damas do a great job conveying different levels of intimacy with one another. Of course, there are the fantasies where the two do have an onscreen connection. Then, there are the scenes during the friendly get-together where they display no sexuality towards one another. There’s also the film’s climax which we won’t ruin here. Either way, the duo convincingly play their characters throughout all of the interactions. Although Scanish’s Jeremy is always longing for Suzanna, he does have to scale back slightly due to his relationship with Betty during the friendly scenes. However, the couple has issues of their own behind closed doors as is shown in the film.

Another thing that’s impressive about the film is that it’s all silent save for the music from Matthew Amadio. Amadio also handled musical duties on All Over Again. Despite no spoken words, the film runs through a gamut of emotions and the music is central to that. Perhaps coincidentally, the fantasies along with the music are quite reminiscent of Kevin Spacey’s Lester Burnham from American Beauty as he objectified his daughter’s teenage friend. Of course, allegations against Spacey of his unwanted sexual advances towards a number of men throughout his career surfaced last year. Again, this may be coincidence but it’s an interesting parallel nonetheless.

Where McGovern’s previous film tried to do too much, the writer/director hits the sweet spot with Hush. At just about twelve minutes in length, there’s no filler or unnecessary plot points. The story is concise and the message is clear. Even so, the film leaves a lot open to discussion and doesn’t paint any gender in a negative light. The only downfall of the film is that Anthony Scanish as Jeremy is sometimes the tiniest bit over the top. Given a complete lack of dialogue, one can hardly get too down on the film because of that and, as previously mentioned, Scanish is mostly quite good throughout the majority of the twelve minute runtime. From All Over Again to Hush, Joseph McGovern has made strides as a filmmaker and a storyteller. His ability to tackle two completely different kinds of subject matter effectively is also a feat in itself. At this point, the sky is seemingly the limit for McGovern.