Here we are again. Another new Netflix show with another mountain of praise heaped onto it. A Series of Unfortunate Events premiered on Netflix on Friday, January 13th and the acclaim has consistently rolled in since. There’s no doubt about it that the show is very entertaining. It has a dark, gothic visual style with plenty of oddball comedy thrown in. However, is the show deserving of all of the praise it has been getting?

A Series of Unfortunate Events was adapted from a children’s book series of the same name. There are thirteen novels in the series all written by Lemony Snicket which is the pen name for author Daniel Handler. The first book was released in 1999 and the final one was published in 2006. To date, the series has sold over 65 million copies.

In 2004, a feature film based on the source material and sharing the same title was released. Jim Carrey starred as the villainous Count Olaf with Liam Aiken, Emily Browning, and twins Kara and Shelby Hoffman as the Baudelaire children, Klaus, Violet, and Sunny respectively. The film also had such name actors as Catherine O’Hara, Billy Connolly, Timothy Spall, Cedric the Entertainer, and Jude Law as the narrator. While it received many positive reviews, the film was bloated and blandly acted.

Most recently, of course, A Series of Unfortunate Events was adapted into a television show on Netflix. The show is narrated by Lemony Snicket (Patrick Warburton). It centers on the three Baudelaire children following a mysterious fire that destroyed their mansion and killed their parents. Each child has their own special trait or ability that helps them throughout the events of the show. Klaus (Louis Hines) is a bookworm who remembers everything he reads, Violet (Malina Weissman) is able to build/fix anything, and the baby, Sunny (Presley Smith), uses her teeth to chew and fashion things. 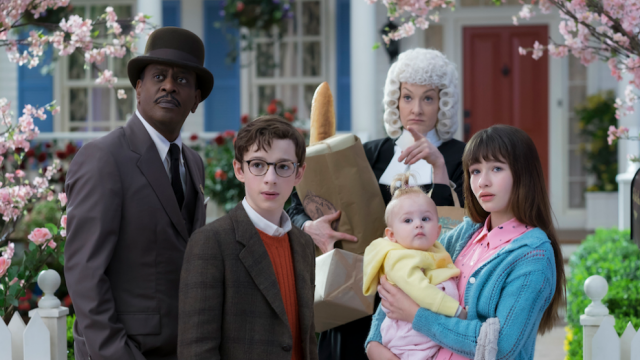 The family’s banker, Arthur Poe (K. Todd Freeman), puts the orphans into the care of their distant relative, Count Olaf (Neil Patrick Harris). Olaf is only interested in a large fortune that was left behind by the Baudelaire parents that only Violet can claim once she becomes of age. The events of each episode mostly show Olaf as he conjures up numerous schemes to take the Baudelaire fortune for himself while the children are shuffled from relative to relative.

Season 1 of A Series of Unfortunate Events is eight episodes long with one novel being covered over every two episodes. One of the biggest issues with the 2004 film was how much material was crammed into less than two hours. The film covered three of the novels while the first season of the show covers four. The TV format is much more suited to provide faithful representations of the novels. It has already been rumored that Season 2 will feature ten episodes covering the next five books and Season 3 will wrap up the final four. If so, it’s nice to see that Netflix is maintaining consistency with their episode structure.

The cast of the show is excellent. Neil Patrick Harris as Count Olaf is, as you’d assume, the star of the show. While his schemes are typically harebrained, they do provide a lot of comedic moments. He’s despicable in his attempts to gain the children’s fortune but he’s also such a dope that you don’t necessarily hate him. His portrayal of Olaf is far better than Jim Carrey’s whose overacting harms the 2004 film more than helps it. The child actors are excellent as well. The three leads are extremely likable and carry the show just as much as Harris. Patrick Warburton is also fantastic as Lemony Snicket. As the narrator, he’s frequently shown onscreen with the characters but not an actual part of the story. Warburton’s dry delivery and constant definitions of words are humorous and add more quirkiness to the show’s already offbeat tone. 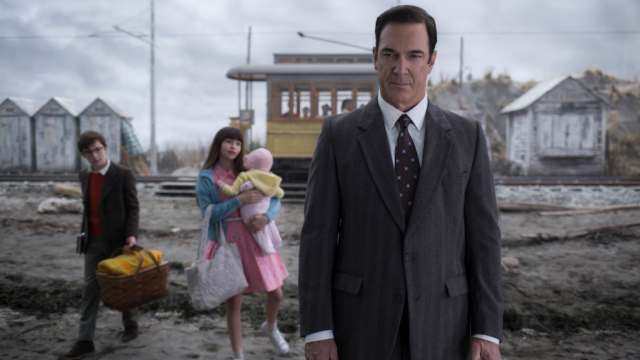 The look of the show is stark and depressing yet as satisfying as can be. Often, the likable characters are shown in bright colors which offer a strong contrast to the vile Count Olaf. The visual effects are intentionally easy to spot but luckily they tend to add to the appeal. While filmmakers usually don’t want audiences to spot blatant CGI effects, they work well with the visual style of the show. Often, A Series of Unfortunate Events feels like a Tim Burton production and, in this instance, that’s a compliment. The only disappointing thing about the visuals and set design is that it’s a little too much like the film. However, the Netflix series is definitely the superior adaptation and can be forgiven for that.

The one biggest negative aspect of the show is that sometimes it feels a bit repetitive. In each episode, the children must convince the other characters, most frequently Poe, that Count Olaf is evil and/or in disguise. While it’s a major part of each episode and is supposed to seem ridiculous to the audience, sometimes the charade simply continues for far too long. It often feels like an episode of Scooby Doo where the gang has to convince an authority figure that a ghost is actually a person in disguise or devising a scheme to get what they want. It’s not a crippling issue but it can be slightly annoying at times.

Overall, A Series of Unfortunate Events does deserve plenty of praise. It isn’t the best thing that Netflix has produced but it still maintains their high level of quality. Season 1 established plenty of positives to work off of and has done justice to the source material. The visual appeal, cast, and storytelling mechanics are exceptional and the viewership confirms it. Unlike with the 2004 film, viewers can expect to see more adventures with Klaus, Violet, and Sunny soon enough. Netflix’s A Series of Unfortunate Events is quirky, weird, and droll and that’s exactly its charm.