It’s a sad, sad day in the horror world. No, we didn’t lose a legendary actor or director. However, we did lose one of, if not the, best continuations of a horror franchise ever made. On Sunday night, the series finale of Ash vs Evil Dead aired and the world feels a little more empty because of it.

For those who may be new to the party, Ash vs Evil Dead premiered in 2015 on the premium cable network, Starz. Developed by Evil Dead creator Sam Raimi along with his brother, Ivan, and Tom Spezialy, the show immediately felt like a love letter to the trilogy of films that spawned it. From the very beginning, the show was heavy on gore, comedy, and plain insanity that made the original Evil Dead a godfather of the splatstick sub-genre of horror. The show has been an absolute joy to watch since the very first episode and has received nearly universal acclaim since its debut episode.

The third season kicks off in typical fashion with the lovable absurdity that the franchise is known for. Following the time traveling escapades by Ash (Bruce Campbell) and Kelly (Dana DeLorenzo) to save their friend, Pablo (Ray Santiago), and stop a younger Ash from ever finding the Necronomicon AKA the Book of the Dead, the three returned to Elk Grove, Michigan. Unfortunately, though, the evil, and immortal, version of their Season 2 companion, Ruby (Lucy Lawless), gets her hands back on the book and reads from it. In addition, she performs a ritual and is impregnated by the spawn of the book.

Meanwhile, Ash runs Ashy Slashy’s hardware store with Pablo manning Pablito’s Fish and Chips outside of it. Ash meets up with a former love interest, Candace Barr AKA Candy Barr (Katrina Hobbs), who informs Ash that she gave birth to his daughter, Brandy (Arielle Carver-O’Neill). After evil is, once again, released, Ash, Pablo, and Candace race to the high school to save Brandy. Here, Kelly reunites with the other two “Ghost Beaters” and, along with Brandy, the group sets out to put evil back in its place and defeat Ruby once and for all. 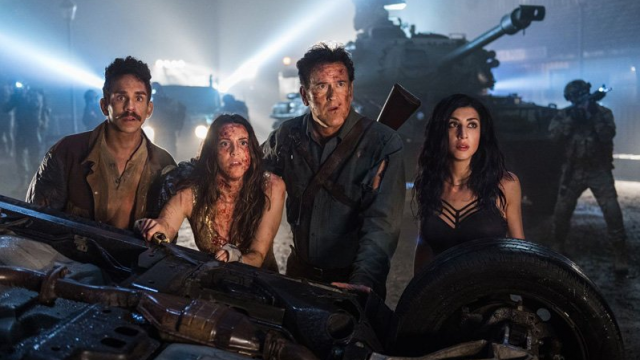 So, yeah. The plot may sound like a convoluted mess but, if you’re a fan of The Evil Dead series, that’s no surprise. A part of what made Ash vs Evil Dead so great over its three season run is the absolute absurdity of it. The show never strayed from what made the movies cult classics. In fact, it embraced the over-the-top nature of the films. The excessive gore, insane Deadite villains, and frequent punchlines coming from Ash himself have been staples of the series since the original film in 1981. Even before the series climax, Ash mentions being covered in blood 24/7 and that’s no understatement. There may have never been another sequel, prequel, or television series that has remained so true to the source material. In the case of Ash vs Evil Dead, that’s the bulk of its charm.

While the bulk of its charm may be in its faithfulness to the rest of the series, the remaining charm comes from Ash vs Evil Dead‘s characters. Bruce Campbell as Ashley J. Williams is absolutely iconic in his own right. Throughout the show, he frequently drinks beer, smokes pot, slices Deadites with his chainsaw hand, and introduces many more to the business end of his boomstick. There’s definitely a reason why the 2013 remake, despite being a pretty decent horror film itself, has been largely ignored by Evil Dead fans. It doesn’t include Campbell. To see him back in his indestructible blue shirt for fifteen more hours of programming is pure joy.

On top of that, his two sidekicks, Pablo and Kelly, are simply awesome. Before the show first premiered, there was no way that adding sidekicks would ever work. How would fans be able to appreciate these two random characters being thrown into the mix with a cult icon? Somehow, it worked wonderfully. Ray Santiago and Dana DeLorenzo did an amazing job with their characters and have become fan favorites in the Evil Dead universe. The trio of Ash, Pablo, and Kelly have amazing chemistry with one another and it’s hard to imagine this show without them. Even Arielle Carver-O’Neill’s Brandy is a welcome addition in the third season. She may not be as lovable as Pablo and Kelly but she also has some good chemistry with the other characters and it would’ve been interesting to see what else is in store for the newest Deadite slayer. 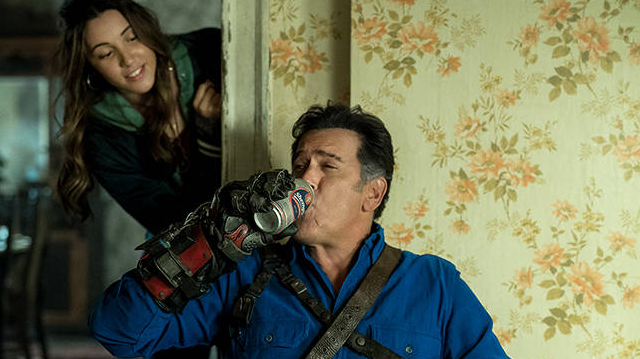 Thus far, this has mostly been a retrospective on the series as a whole as opposed to a Season 3 wrap-up. Well, there really isn’t a lot to say about the show other than that it’s fantastic. Since 2015, it has easily been one of the best shows on television. It’s just so much damn fun. That being said, we’d be remiss to not at least discuss a few discrepancies with the final season. Lucy Lawless returns as Ruby and is great as usual. Though, her story arc is a little confusing in Season 3. After being an honorary Ghost Beater in Season 2, it’s hard to see her as the villain once again in Season 3. It feels like a slight step backward even though this is technically a different Ruby than the one in Season 2.

Also, the series finale will most certainly be a letdown for some fans. No, we won’t spoil it here but it’s definitely an odd ending in the same way that Evil Dead 2 had an odd ending. Ultimately, how do you end a show like Ash vs Evil Dead? It may be goofy and absurd but that’s obviously intended. Plus, the ending leaves the storyline wide open for if Sam Raimi ever wanted to make another film or even another extension of the show. Sadly, though, that doesn’t seem like it will happen. Following Ash vs Evil Dead‘s recent cancellation, Bruce Campbell announced his retirement of the character on his Twitter account. Of course, things can always change but, for now, Campbell won’t be donning the chainsaw anytime soon.

Even though Ash vs Evil Dead appears to be done for good, it’s astounding that fans ever got it in the first place. A fourth Evil Dead movie had been long rumored but never came to fruition. Instead, we got three full seasons of an excellent television series and it was everything a fan could hope for and more. While it’s sad to see it end, it’s good to know that Ash Williams and Bruce Campbell got a proper sendoff after all these years. Ash vs Evil Dead is one of the greatest horror shows to ever air and it never wavered from the spirit of the source material. If you’re an Evil Dead fan and haven’t watched it, what are you waiting for? For everyone else, what’s left to say other than, “Hail to the King, baby.”