Well, we certainly have been getting our fill of Batman as of late haven’t we? Earlier this year, the debacle known as Batman v Superman: Dawn of Justice was released and Suicide Squad, featuring everyone’s favorite vigilante, is being released this coming Friday. Also, Justice League and The Lego Batman Movie just received new trailers over San Diego Comic-Con weekend. While there has been plenty of hype for all of these films, perhaps the most anticipated was released direct-to-DVD with Batman: The Killing Joke.

This new animated feature from the DC Universe is based on the 1988 graphic novel of the same name. It was written by Watchmen creator, Alan Moore, and illustrated by Brian Bolland. Originally, it was colored by John Higgins but Bolland re-colored it for the 2008 hardcover re-release of the story.

The Killing Joke is commonly recognized as the quintessential origin story of Batman’s arch-nemesis, the Joker. Both Tim Burton and Christopher Nolan have cited The Killing Joke as an influence on their respective interpretations of the Joker in Batman and The Dark Knight. Despite criticisms from its creators, the graphic novel has been universally accepted as one of the best Batman stories period.

The plot centers on the relationship between Batman and the Joker. Batman realizes that their heated rivalry will not cease until one of them is dead. The Joker permanently injures Barbara Gordon (AKA Batgirl) and also kidnaps and tortures her father, Commissioner Gordon. The story also features flashbacks of the Joker before he becomes the Clown Prince of Crime. As an unsuccessful comedian with a wife and baby on the way, the Joker gets into business with the mob. After an accident at a chemical plant, he transforms into the illustrious villain. 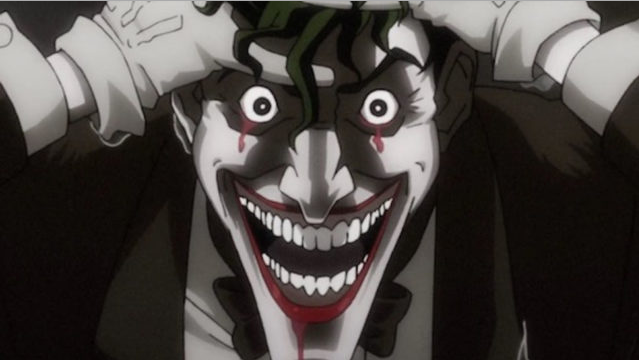 As the graphic novel comes in at a sparse 48 pages, the filmmakers, including writer Brian Azzarello and producer Bruce Timm, created a prologue centering on the relationship between Batman and Batgirl. Unfortunately, it falls extremely short. Much controversy erupted when the film premiered at Comic-Con over a sex scene between the two characters. Many people criticize the filmmakers for turning Batgirl into a cliche and merely sexualizing her. While the scene, and prologue in general, seems unnecessary, it’s over relatively quickly and shouldn’t be considered a major detractor to the film as a whole.

The Killing Joke is at its best when it is simply recreating the novel. The film is an extremely faithful adaptation of the source material. Most of the dialogue, as well as the images themselves, are pulled straight from the book. Where the prologue tends to limp through its bland story, the rest of the film flies by. With a runtime of only 76 minutes, it’s a quick watch but seems even shorter than that. 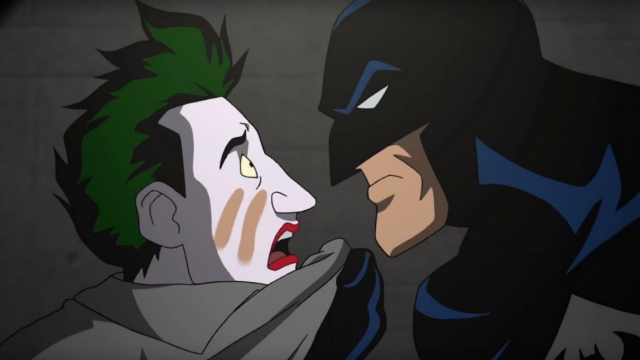 The voice acting is quite strong with Kevin Conroy and Mark Hamill returning to their roles as Batman and the Joker respectively. Hamill announced his willingness to join an adaptation of The Killing Joke even after previously retiring from the character. Although, he was recently quoted saying that The Killing Joke would no longer be his final performance as the Joker. Tara Strong also returns as Barbara Gordon/Batgirl following her stint as the character in The New Batman Adventures while Ray Wise plays Commissioner Gordon.

While the prologue is unnecessary, the adaptation is quite good. Possibly the most disappointing aspect of The Killing Joke, though, is the animation itself. While it’s not the worst, Bolland’s recolored version of the graphic novel simply can’t be beat. The film looks like an episode of The Animated Series as opposed to a legendary variation of the story. There is a cheap looking CGI chase scene in the prologue that is just ugly against the other animation. From the vibrant colors, the shading, and the detail of the graphic novel, there isn’t anything on par with Bolland’s version of the novel in the film.

When all is said and done, this is a film for Batman fans. A casual viewer most likely wouldn’t care about the history and popularity of the graphic novel nor the medium itself. With this R-rated version of the story, fans got what they wanted. Conroy and Hamill returned as the two most popular voice actors of their respective characters and the story was faithfully adapted to the screen. Unfortunately though, the useless prologue and uninspired animation tend to drag the film down. If you’re a Batman fan, it’s still definitely worth a watch or even a buy. Batman: The Killing Joke may not be as groundbreaking of a film as it was a graphic novel, but it’s still nice to see that someone out there was listening to the fans for this adaptation.