Last night, Gotham finished up its second season on Fox in typical cliffhanger fashion. Was it a satisfying ending? Well, it depends how you look at it.

Gotham is an interesting show. Despite being set before the emergence of Batman in Gotham City, the showrunners still are able to draw from 77 years of history and lore. Over the years, Batman has frequently been said to have the best villains. Gotham is able to capitalize on this and provide suitable backstories for the dark knight’s expansive rogues gallery and show how each villain truly came to be. It is this very idea that the second season of the show focuses most heavily on.

If you haven’t seen the first season, basically it sets up the main characters and their roles within the Batman universe. Jim Gordon (Ben McKenzie) is the driving force of the show but he is also a very flawed character. He’s not all that interesting really but you’re supposed to root for him because of his eventual connection to Batman. He starts off wanting to rid Gotham of corruption and injustice but ends up making a lot of questionable decisions. In the world of the show, it’s safe to wonder if he’s actually any better than the people he tries to take down.

While the first season dedicated most of the time to establishing characters like Gordon, his partner, Harvey Bullock (Donal Logue), Penguin (Robin Lord Taylor), and Edward Nygma (Cory Michael Smith), the second season was set to be all about building up the villains. The subtitles are “Rise of the Villains” and “Wrath of the Villains” for the first and second halves of the season respectively. This does seem to be a little bit of a marketing ploy by Fox. Yes, the villains are more prevalent in this season than in the first but these titles make it sound like the villains will basically take over the city by the end. Alas, they do not. 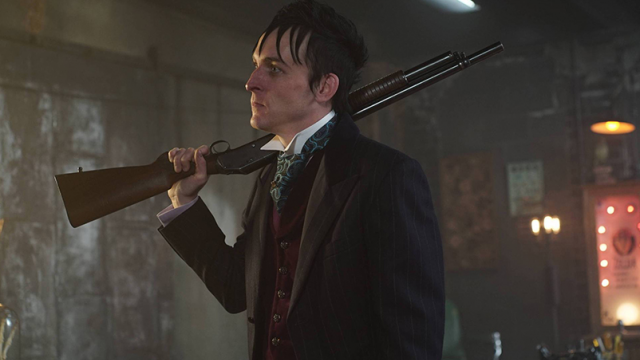 Season 2 sees Jim Gordon bounce back and forth between being a respected officer and basically a vigilante of sorts as he continues to defy his superiors in the Gotham City Police Department. On top of that, a number of inmates are broken out of Arkham Asylum by discreet villain Theo Galavan (James Frain) and let loose in Gotham City to cause chaos. While the first half of the season focuses on Galavan and his eventual mayoral campaign, which is eerily similar to the Penguin’s plan in Batman Returns, the second half is about Hugo Strange (B.D. Wong) reanimating corpses.

We’re also treated to the first appearances of villains like Mr. Freeze, Firefly, Azrael, and Clayface along with more character development for Penguin and Nygma (who eventually will become The Riddler). Firefly and Azrael have differing origins/alter-egos in Gotham than they do in other mediums but the characters work within the context of the show and add more importance to the immediate story being told.

Many other future villains have been either referenced or teased in the show as well. Of them, the one with the most questions going forward is Jerome Valeska (Cameron Monaghan). Jerome embodied numerous traits of The Joker in his brief villainous appearances in Season 2 and, even though he is killed early on, it’s possible that he has been reanimated by Strange to make a comeback in Season 3. In the final scene, The Joker’s laugh can be heard when Strange’s inmates escape from a crashed bus onto the streets of Gotham. While this take on The Joker wasn’t overly original as it borrowed quite a few mannerisms and activities (i.e. filming himself killing police officers) from Heath Ledger’s Joker in The Dark Knight, he was still one of the most intriguing characters that the show has offered up thus far. Will Jerome reemerge in the series as The Joker? Only time will tell. 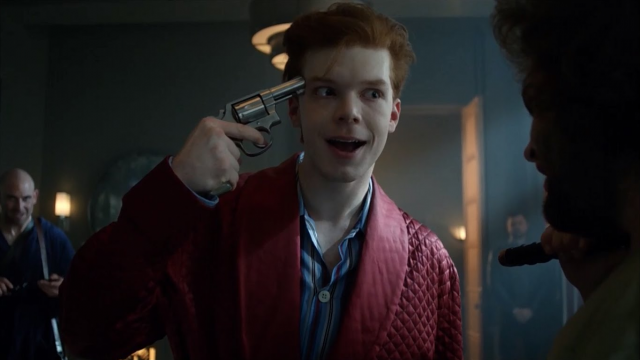 While Gotham is a pretty entertaining show, sometimes it does feel a little dopey. It’s an odd dynamic because some of the episodes are real gritty and dark but then others are just too over the top and make too much light out of grim situations. Also, we all know that some of these villains will never truly die because they’re Batman’s villains not Jim Gordon’s. It’s hard to figure out where this show is ever going to go with the story. Although Bruce Wayne (David Mazouz) is in almost every single episode, he’s only a 12 year old kid at this point with his parents being recently murdered. On one hand, it seems like Batman should come into play relatively soon judging by the story but Bruce is far too young at this point to become a legitimate threat to any of these villains. In contrast, Camren Bicondova is great as Selina Kyle and you can easily see how she’ll become Catwoman probably sooner rather than later.

At this time, it’s hard to say what the future is for Gotham. Of course, the next season should go even further with the emergence of new supervillains and, more specifically, The Joker. However, if The Joker is going to make an appearance, it’s just going to feel somewhat cheap without Batman there to counteract him. Fox can literally go anywhere from the cliffhanger ending of Season 2 and hopefully they take the show to the next level. The 22 episode structure is a bit much and the show could benefit from cutting the seasons down to 13 or 16 episodes to make the seasons more concise and structured. Whatever happens next for Gotham, they have to know that the heat is going to be on with other superhero inspired shows like Daredevil, Arrow, and The Flash growing in popularity. If they fail to impress this fall with Season 3, it wouldn’t be a surprise if Gotham ultimately introduces Batman early or the show simply goes away completely.