As you know by now, the 1970’s featured horror classics abound. Whether we’re talking The Exorcist, The Texas Chain Saw Massacre, Carrie, or any other multitude of 70’s films, iconic titles are everywhere. Then, how is it that one of the most classic films goes so unheralded to the general public. Personally, I had a number of conversations this past week where I’d mention Richard Donner’s 1976 film, The Omen. The majority of these conversations resulted in responses of “what’s that?” This, of course, is quite shocking as The Omen has received multiple sequels, the reboot treatment, and has been parodied time and time again. How does a horror classic become so overlooked? It’s October. Halloween is around the corner. Let’s give The Omen its just do here in 2018.

The idea for the film had been kicked around for some time before fully taking shape. Originally titled The Antichrist and, later, The Birthmark, David Seltzer was hired to write the screenplay for The Omen. Prior to his work on the film, Seltzer had never read the Bible but did so in preparation. For the lead role of United States Ambassador Robert Thorn, Charlton Heston reportedly turned down the role as did William Holden who would go on to star in Damien: Omen II. Gregory Peck shockingly agreed to star despite his career being on a downswing and his son committing suicide in 1975. In addition, The Omen marks the first feature length directorial hit from Richard Donner who would go on to direct Superman two years later. The studio made enough money from the film to allow George Lucas to finish work on Star Wars as he saw fit.

The plot centers around Robert Thorn (Peck), the aforementioned diplomat turned US Ambassador to the United Kingdom. The film opens in the hospital where his wife, Katherine (Lee Remick), gives birth to a son that dies after the delivery. Unbeknownst to Katherine, hospital chaplain Father Spiletto (Martin Benson) convinces Robert to secretly adopt an orphan to take their son’s place. Here, the plot jumps ahead five years following Robert’s promotion to ambassador. They celebrate their new son, Damien’s (Harvey Stephens), fifth birthday and mysterious events begin to occur. Damien’s nanny (Holly Palance) commits suicide at the party and a new nanny, Mrs. Baylock (Billie Whitelaw), shows up unannounced as her replacement. As more strange occurrences and bodies pile up, Robert grows to fear that his son may be the Antichrist.

Being released in 1976, The Omen came out at a time where violence was hitting a new high in horror. With films like The Exorcist and The Texas Chain Saw Massacre shocking audiences years before the release of this film, it’s interesting to note that The Omen is a different kind of horror experience. It has a more classy 1960’s feel than other horror films of the time. Similarly to something like The Silence of the Lambs, it’s more of a thriller with horror elements than a straight up horror movie. Robert’s psychological descent into madness throughout the film compounds little by little. It starts out with quirky things like Damien acting up as the Thorns are about to attend a church wedding. Soon enough, though, death begins to follow Robert and the evidence piles up with the bodies. 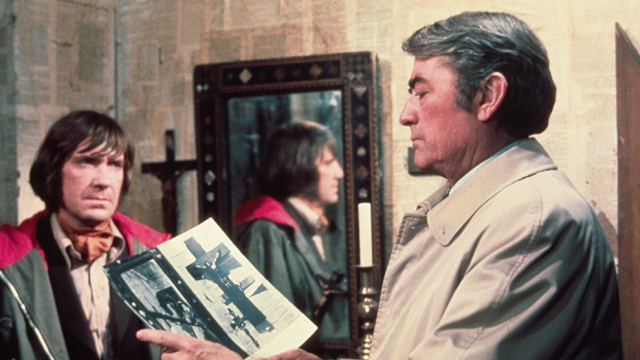 Gregory Peck is excellent as Robert Thorn. As was previously mentioned, Peck’s career had been winding down to the point that the nearly 60 year old considered retirement. Peck is perhaps most well known for his Oscar winning role as Atticus Finch in 1962’s To Kill A Mockingbird. Though, he worked with a number of big stars over the course of his career including Audrey Hepburn, Ingrid Bergman, and director Alfred Hitchcock. Peck found himself starring in The Omen shortly after his own son’s death with his agent convincing him that it would be good to concentrate on work following such tragedy. Needless to say, the decision was a good one as Peck made Robert Thorn into a sympathetic character. He’s unwilling to accept that Damien is the son of the devil but becomes less sure as the film continues. It’s a slow burn effect that is played to perfection and has you questioning just as much as Robert himself.

The rest of the cast holds their own as well. Lee Remick is convincing as a mother in peril. Like Robert, she’s broken down and withered away over the course of the film. Remick shows genuine fear during one scene in the film where baboons at the zoo attack the car that her and Damien are in. The story goes that handlers put two baby baboons in the car with Remick and Harvey Stephens to upset the baboons. They attacked the car and the fear on Remick’s face in the final cut of the film is legitimate. Speaking of Stephens, The Omen marked the start of his brief film career. He got the part after attacking director Richard Donner and his subsequent performance is iconic in horror. He has very little dialogue but it’s his facial expressions that send chills down viewers’ spines. Stephens only had two more roles after The Omen with one coming in the film’s 2006 remake. 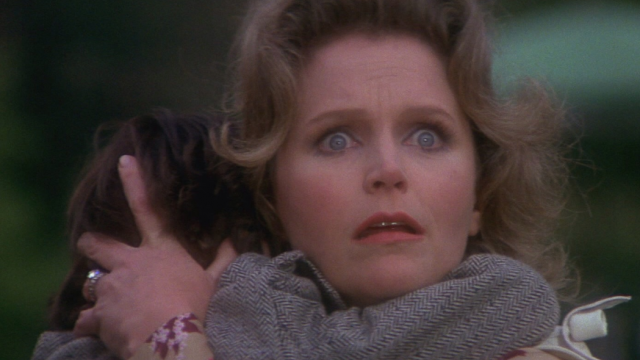 Where The Omen truly excels are during its infamous death scenes. As has already been stated, the film plays out mostly like a mystery/thriller. That’s not to say that there aren’t some excellent horror scenes though. The film’s deliberate pacing builds anticipation for its more violent moments and does so to perfection. Obviously, the scenes won’t be ruined here but the special effects, music, and overall execution, for lack of a better word, leave a lasting impact with every death. The death scenes are all unique and worthy of being in a film with the title of The Omen. You can definitely tell that something like Final Destination was influenced by these scenes. While The Omen may not be as graphic as some of the other films from this time period, it sets itself apart and impresses with its less is more approach.

Enough can’t be said about The Omen. It’s a classic in every sense of the word. We haven’t even mentioned Billie Whitelaw’s chilling performance as Mrs. Baylock or Jerry Goldsmith’s legendary Oscar winning score. Everything about The Omen just works and it still holds up to this day. Then, when you do a little research into the making of the film, you learn about the cursed production which makes the idea of the film even more disturbing. One review cannot do it justice. It’s an excellent piece of horror cinema and it’s a shame that it seems to be forgotten among modern audiences. If you haven’t seen or heard of The Omen, you owe it to yourself to watch a true horror classic.