Home invasion films are nothing new in the horror genre. Actually, the concept has been utilized for decades. Films such as The Last House on the Left, Funny Games, and The Purge have all put their own spin on it. The new film from writer/director Fede Alvarez, Don’t Breathe, is the most recent addition to the home invasion sub-genre.

Coming off of the box office success of his feature length debut with 2013’s Evil Dead remake, Alvarez has had a bit of a buzz behind him. After all, despite opening to mixed reviews, Evil Dead is a relatively solid reboot of the series. With Don’t Breathe, Alvarez continues his penchant for stark atmospheres and effective gore. Yet, he also fails miserably to make sense of some of his most important scenes and to avoid laughable twists.

The plot of the film definitely sounds intriguing on paper. Three friends break into a blind man’s house to steal money he received after his daughter’s death. However, their plan backfires and, all of a sudden, they’re being hunted by The Blind Man (Stephen Lang).

Let’s start with what’s good about the film. The acting itself is pretty solid. The friends, Rocky, Alex, and Money, played by Jane Levy, Dylan Minnette, and Daniel Zovatto respectively, have decent chemistry with one another and they don’t play into typical horror movie teenager stereotypes. Though, it’s a bit hard to relate to them as a viewer since they’re not necessarily good people. After all, they’re trying to rob a blind man. They’re likable enough but it’s hard to be completely on their side. Lang as The Blind Man is great. He brings a lot of intensity to the role and yet you still pity him for his past misfortune. The dilapidated house in which the events mostly take place is a perfect mood setter. 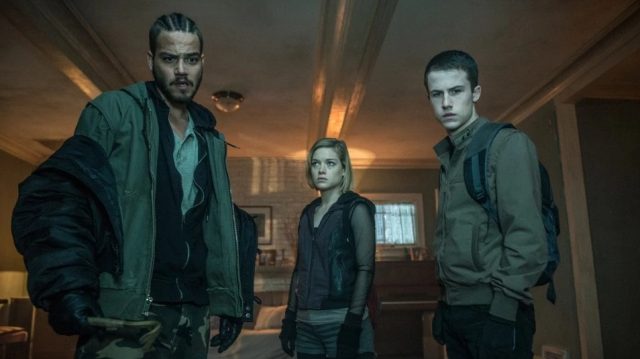 At the same time, being stuck in the house with a blind antagonist hamstrings the film a little. It seems that there’s only so much that can be done before it starts feeling repetitive. The Blind Man’s other senses don’t seem to be heightened and sometimes it’s hard to believe that he can’t detect the intruders when he’s only a foot away from them. He’s not much of a marksman either. Yes, he’s blind but he’s also a war veteran. He’s quite trigger happy as he shoots at every movement and sound in his vicinity for cheap scares.

Perhaps the biggest issue with Don’t Breathe is that it borrows almost entirely from other films. The plot sounds like Wes Craven’s The People Under the Stairs. There’s a Silence of the Lambs vibe to it after The Blind Man starts hunting the friends throughout his house. As odd as it sounds, there’s also a part that feels like something out of Cujo. It’s absolutely ludicrous within the context of the film and simply doesn’t belong. It has to be seen to be believed. 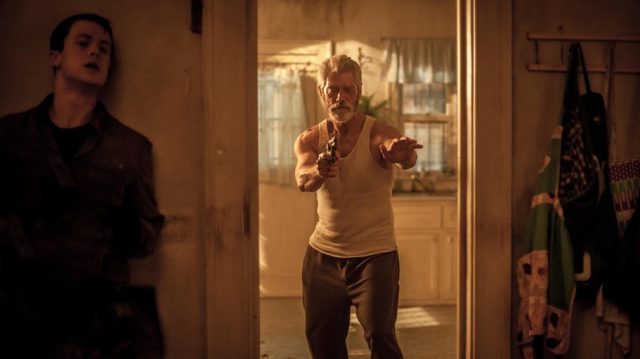 One final problem with Don’t Breathe is its ending. No, the ending won’t be spoiled here but wow. What a disaster. There’s one twist in the film that you can sort of anticipate if you’re paying attention but, from there, things get taken way too far. Out of nowhere the plot takes a severe turn and seems like something out of a completely different movie. Unfortunately, not much can be said without ruining it but it’s an unnecessary event that taints the overall quality of the film.

In all fairness to Alvarez, and the film in general, it has been receiving positive reviews from many critics. It’s really hard to understand why though. The first half of it is interesting enough and you really don’t know which direction the filmmakers will take. Then, after a while, the plot seems to fall apart and become a hodgepodge of scenes influenced by other films. Once again, there are those few scenes that are frankly preposterous and feel like they just don’t belong. As impressive as Alvarez’s Evil Dead was in taking a cult classic and updating it, Don’t Breathe feels like a step back. It’s an original horror film that borrows its highlights from films that have previously done it all better. Don’t Breathe isn’t the worst horror film that you’ll ever see but it may disappoint.