It seems as if there are very few original horror films being released these days. The majority of them are remakes, reboots, sequels, and prequels.  It’s also quite difficult to infuse an element of comedy into horror without a film becoming a mockery of itself. Yet, comedian Jordan Peele was able to blend the two styles into his refreshingly original feature film debut, Get Out.

Most people know of Peele from his sketch series, Key & Peele, on Comedy Central as well as from his time on MADtv. Since leaving the latter show in 2008, he has been working nonstop in television and, most recently, in film. Last year saw Peele and his Key & Peele co-star, Keegan-Michael Key, star in Keanu. Peele also co-wrote and produced the film. It’s no surprise, due to his recent work ethic and creative mind, that Peele has taken his craft one step forward to write and direct a film of his own.

Get Out stars Daniel Kaluuya as Chris. He goes on a trip with his girlfriend, Rose Armitage (Allison Williams), to visit her parents. Rose’s parents, played by Bradley Whitford and Catherine Keener, are unaware of Chris’s African American heritage which causes some early concern for him. Upon their arrival, Chris meets the family’s African American groundskeeper and maid, Walter (Marcus Henderson) and Georgina (Betty Gabriel) respectively. Both of them behave strangely throughout Chris’s stay and he begins to suspect something’s wrong. His suspicions heighten after an odd family gathering at the Armitage home.

Since this is spoiler free, it’s difficult to delve into any more details about the plot. Regardless, Jordan Peele does a great job building suspense without using cheap scare-tactics commonly found in horror. While there’s definitely a tension between Chris and the other characters, there isn’t anything that alarming about their interactions. Rose’s parents, Dean and Missy, aren’t overtly racist or demeaning towards Chris and they often try to connect with him. The one character who seems like an outright threat is Rose’s brother, Jeremy (Caleb Landry Jones). Even with Jeremy, it seems like he’s just trying to mess with Chris instead of actually hurting him. 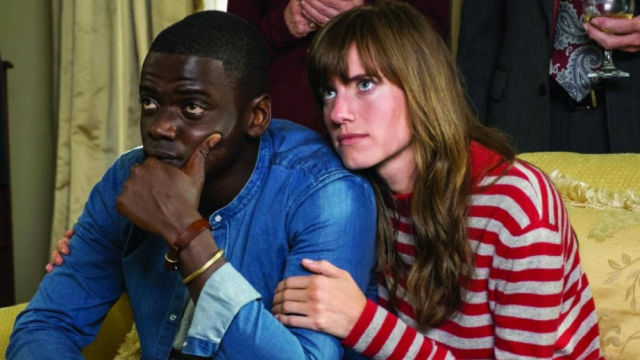 Actually, most of the suspense in the film comes from how interested the family is in Chris. Of course, Rose’s relatives are all caucasian with only Walter, Georgina, and Andrew Logan King (Lakeith Stanfield) as the other African Americans at the family party. All three of them have their moments to shine as their characters break down when communicating with Chris before snapping back into their “normal” routine. As a viewer, you feel as uncomfortable as Chris does around the number of gawking white people who are eager to bond with him. Daniel Kaluuya’s performance is perfect for the film as his discomfort is often shown on his face and through his body language as opposed to being expressed through words.

Most of the comedy in the film isn’t necessarily laugh-out-loud funny. It’s very subtle and clever with things like Dean Armitage dropping “my man” at the end of his sentences and claiming that he’d have voted for Obama for a third term if he could have. These scenarios result in laughs simply because of how innocent and “cool” the characters try to be around someone that’s an outsider. There’s no hostility or racism but it’s as if they’re unsure of how to act. The only real comic relief in Get Out comes from Chris’s friend, Rod (LilRey Howery). Rod is more of a stereotypical black character who’s skeptical of white people. Though, for this film, it works and isn’t overbearing. 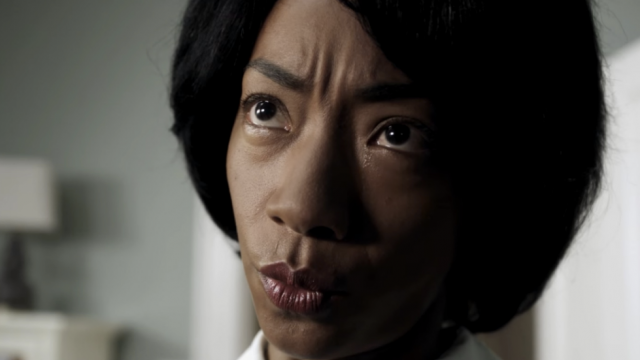 While Get Out does many things well, including paying homage to horror films past, it isn’t perfect. There’s nothing overly bad about it either though. The buildup of suspense keeps you honed in on the story but the ending feels more like a typical horror film instead of something more unique. That’s the film’s biggest problem in general. You seem to remember everything about the buildup and not as much about the final result. While that’s not the worst problem to have, an amazing climax would’ve bumped the film up to another level. That being said, there is satisfaction to be had by the ending. It just feels like there could’ve been more.

Overall, the film is very enjoyable and definitely worth a watch. Its subtle social critiques on race aren’t in your face nor are they the main selling point of the film. There are just enough thought provoking moments to give the film some added substance and set it apart from its contemporaries. It’s also similar to other horror/comedies like The Cabin in the Woods or Tucker & Dale vs. Evil. While there’s plenty of humor to be had, the films never abandon their horror roots or make the genre look foolish. Get Out is a solid directorial debut for Jordan Peele and is a refreshing and original horror film in a day when the genre seems just about out of ideas.