Since the late 1990’s, there have been plenty of solid science fiction action films. The Fifth Element, The Matrix, and District 9 have gone above and beyond with their visual effects and action scenes. It’s no surprise that many newer films have consistently pilfered traits from these properties as well. This is exactly the case with Rupert Sanders’ new film, Ghost in the Shell.

The film is the first live action adaptation of the popular Japanese manga series of the same name. The series was written and illustrated by Masamune Shirow beginning in 1989. Prior to this American version, there were four anime films released as well. There was also a television series along with an additional series featuring the anime films with new added content. Before this newest attempt, the media franchise consistently released new material over the years with Ghost in the Shell: The New Movie lastly being released in 2015.

The 2017 film follows Major Mira Killian (Scarlett Johansson), the lone survivor of a cyberterrorist attack whose brain is implanted into a cyborg to create the ultimate soldier. Major thwarts an attack on a Hanka Robotics business conference along with Batou (Pilou Asbæk) and his team of soldiers. Major takes down a rogue robotic geisha and later tries to extract data from it. In doing this, she’s hardwired to the geisha until Major herself is hacked by someone known only as Kuze (Michael Carmen Pitt).

In addition, Major experiences hallucinations that her designer, Dr. Ouelet (Juliette Binoche), dismisses as glitches in her programming. Major begins to doubt memories of her past while also breaking protocol on her missions. Eventually, Major and Batou figure out Kuze’s murderous pattern and reveal corruption within Hanka Robotics. 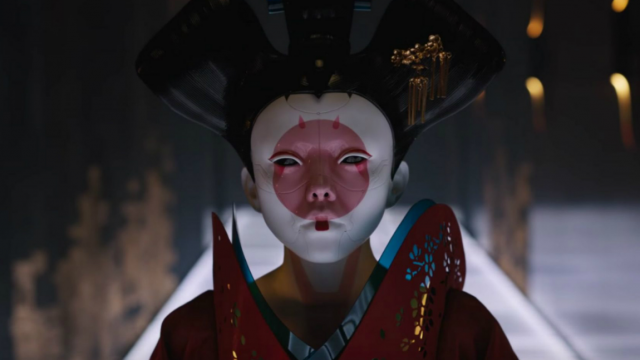 It’s somewhat hard to talk about the plot of Ghost in the Shell as it’s kind of all over the place. From the get-go, you’re thrown into the action of a near-futuristic world. Unfortunately, it’s a world you don’t quite understand at first. You’re not entirely sure what Major is initially looking for or why. Slowly, but surely, the pieces fall into place and you understand who she’s tracking and his importance (sort of). While Kuze is the villain for the majority of the film, another jarringly arises seemingly out of nowhere. Again, you understand why but it’s still a bit abrupt. In a lot of ways, the plot is in line with films like Equilibrium, The Matrix, and Blade Runner. It’s also similar to Dark City and, more abstractly, 1984. The common theme between all the films is some higher being/corporation controlling an individual’s thoughts and existence.

Scarlett Johansson is decent in her role as Major. She doesn’t necessarily do anything above and beyond what you’d expect but she’s definitely a convincing hero. Being a cyborg, she doesn’t show a ton of emotion but there are a handful of scenes where she does including when she meets Kuze and another time when she meets an older woman. It’s an interesting character arc that shows that while only her brain is organic, her synthetic body doesn’t control her. Also, there was initially some backlash about an American actress portraying a Japanese character. The filmmakers did provide reasoning within the story for the character to not be Japanese and Johansson does a solid job with the character regardless.

As far as acting goes, Michael Carmen Pitt as Kuze is the most memorable. It’s hard to discuss his character in much detail without ruining him. Without spoiling too much, Kuze is also a cyborg with his own reasons for murdering his victims. If you’re familiar with Ridley Scott’s Blade Runner, Kuze is similar to Rutger Hauer’s Roy Batty. Pitt’s performance as the glitchy, monotone Kuze is perhaps the most emotional scene of the film. Again, it’s reminiscent to Roy’s final scene in Blade Runner. 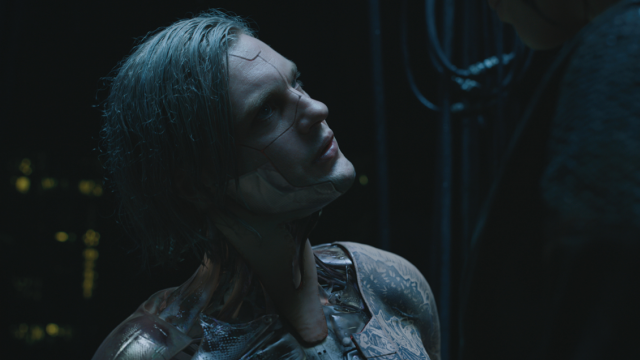 The best thing about Ghost in the Shell in general is its special effects. They are absolutely breathtaking. They take note from films like the aforementioned Blade Runner, The Fifth Element, and the Deus Ex video game franchise. The Japanese city features realistic holograms, colorful architecture, vast skyscrapers, and a beautiful, yet brooding, atmosphere. Even the effects on Major’s cloaking device is done well and used quite cleverly. In all seriousness, Ghost in the Shell often does feel like a live action video game. Between its action scenes, wonderful visuals, and its conspiracy driven plot, it could be Deus Ex. It also doesn’t hurt that both cover the topic of cybernetic augmentation.

Honestly, this rating doesn’t quite do the overall film justice. When you’re able to finally absorb yourself into the story, there’s a lot to like about Ghost in the Shell. Yet, there are so many questionable decisions in its pacing, minor character development, and overall storytelling that can’t be ignored. The ending is also somewhat typical for this type of film. Other than that, though, Ghost in the Shell is a visual treat with some great moments. While it’s not a perfect film and doesn’t anything overly original, it still holds some good company with it’s science fiction peers.