Sometimes there are ideas that just make perfect sense to adapt on the big screen. Things like video game properties or, most recently, comic books are perfect for these cinematic adaptations. As long as there’s a unique vision and faithfulness, how could anything go wrong? This has been explored numerous times with Grimms’ Fairy Tales. Of course, Disney has often received big returns for their work on films like Snow White and the Seven Dwarfs, Cinderella, and Sleeping Beauty. So, why is it that nobody else can seem to make their stamp on other fairy tales based on the Brothers Grimm? Director Osgood Perkins is the most recent filmmaker to take a chance and miss the mark with his new film,  Gretel & Hansel.

Well, that’s not a good way to start. The correctly titled “Hansel and Gretel” is a German fairy tale published by Jacob and Wilhelm Grimm in 1812. The story itself wasn’t an original work from the brothers and most likely originated hundreds of years prior. However, the Grimms’ version has become the standard. The short version of the tale is that it follows a young brother and sister who stumble upon a gingerbread house in the woods. An evil witch invites them into the house for a meal but keeps them captive. Hansel and Gretel are forced to do chores as the witch fattens them up with the intention of eating the children. Her plan backfires as the children outsmart her and shove her into her own oven instead. There have been all kinds of adaptations covering every genre of filmmaking over the years. There have been dramas, comedies, animated versions, and everything in between. The latest version came in the form of 2013’s critically panned Hansel & Gretel: Witch Hunters which served as a dark fantasy action film.

The 2020 version of the confoundingly titled Gretel & Hansel starts out familiar enough. 16 year old Gretel (Sophia Lillis) and her 8 year old brother, Hansel (Samuel Leakey), are mostly left to fend for themselves by their parents. After failing to land a job with an elderly creep, they head into the forest in search of food but discover dangerous forces in the woods. At one point, Hansel and Gretel are saved by a hunter (Charles Babalola) following an attack but the hunter is never seen again. They take their chances in the woods again and come to the brink of starvation before finding a house. They’re taken in by Holda (Alice Krige), a strangely welcoming old woman with a never-ending supply of food. Holda takes an interest in Gretel as the two children become more suspect of Holda the longer they stay.

Ultimately, the plot doesn’t really matter. There is no plot. Sophia Lillis’s Gretel provides tiny glimpses of story here and there with dry narration over some scenes. Other than that, the film is basically watching people move around in slow motion for 87 minutes. As one could probably guess from the name swap, Gretel takes center stage in this film as the shoestring plot dabbles with ideas of womanhood equating to power. It’s all stuff we’ve seen before done much better in other films. Something like Brian De Palma’s Carrie was worlds better in this regard and that film is 44 years old at the time of this writing. If there’s anything positive to say about the plot, it’s that it at least tried to veer from the fairy tale. Tried is the keyword. 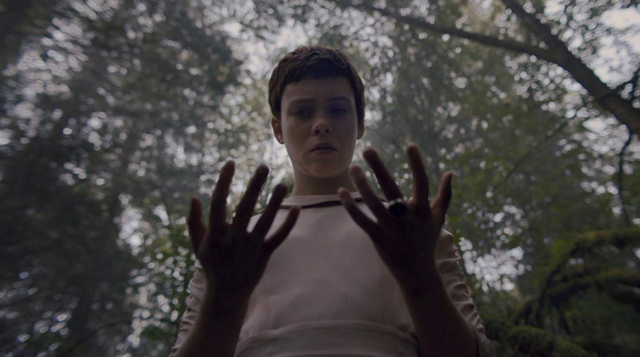 Again, the main problem throughout the film is its lack of a plot. Of course, there are films that have dazzled despite having little story. One could say that Stanley Kubrick’s 1980 horror opus, The Shining, is a bit lacking in this department. However, viewers get to experience caretaker Jack Torrance’s descent into madness through eerie visuals, ghostly interactions, and a performance of a lifetime from Jack Nicholson. Even last year’s Midsommar took on a minimalist, slow burn approach but kept viewers engaged for a full hour longer than Gretel & Hansel. That film was also short on plot but, when compared to this one, Midsommar may as well be a pulse pounding action movie.

One of the things that really causes Gretel & Hansel to drag is its characters. Sophia Lillis has experienced recent success as a standout talent in Andy Muschietti’s two It films. Her performance here, though, doesn’t come anywhere near those other two. Her monologues are monotone and bland while she hardly does anything onscreen. The film is a lot of characters sitting around looking confused. Samuel Leakey’s Hansel is largely forgettable. Even as I sit here writing this, I can hardly remember what he looks like. There are a few other actors in the film but, like Leakey’s Hansel, they’re forgettable. Alice Krige is the closest thing to a standout as the witch, Holda. In a better overall film, Krige’s performance would be much more heralded. Her silent menace unpredictability really adds to the horror aesthetic that Osgood Perkins is going for. Even her younger counterpart, played by Jessica De Gouw, in flashback sequences offers a glimmer of light in a hopeless cinematic experience. 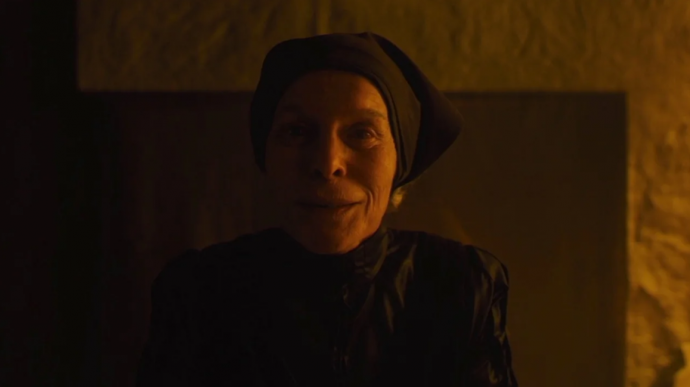 Other than Krige’s chilling performance, the only real positive of Gretel & Hansel is its technical mastery. Every shot is wonderfully spooky with the hazy, dark forest backdrop. The architecture of Holda’s cabin is a departure from the fairy tale’s gingerbread house but it works well in this horror themed adaptation. The cinematography is handled by Galo Olivares who recently worked alongside filmmaker Alfonso Cuarón on his Oscar winning 2018 film, Roma. Robin Coudert, who’s simply credited as Rob in the credits, handles the film’s haunting synth score to great effect. It’s reminiscent to something like Kubrick’s A Clockwork Orange but obviously less iconic. Regardless, it fits with the atmosphere of the film and bolsters the film’s technical accomplishments.

As a complete horror experience, Gretel & Hansel comes up very short. If it was a 20 minute short film instead of a feature, we’d probably be singing its praises. As a full length theatrical release, the film just doesn’t work. It reminds of Osgood Perkins’ previous film, 2016’s I Am the Pretty Thing That Lives in the House. It’s an intriguing idea that looks nice but is so agonizingly slow that it puts you to sleep. There’s something to be said for atmospheric horror but not when it bores you to death. When it comes to Gretel & Hansel, it’s worthy of technical praise but there’s nothing that will have you coming back for a second helping.