In this day and age, the western isn’t one of the most popular film genres. That being said, it seems like there’s always at least one noteworthy western that comes out on a yearly basis. While it’s still pretty early in 2018, it looks like Scott Cooper’s new film will be that western for this year. Hostiles is a beautifully shot film with some emotionally gripping and violent scenes. Yet, that doesn’t keep the story from feeling somewhat uneven throughout its overly long runtime.

Cooper, who directed/wrote the screenplay for the film from a manuscript by Donald E. Stewart, has had a brief, but successful, career thus far in Hollywood. His first film, Crazy Heart, netted Jeff Bridges his only Academy Award for Best Actor. Cooper followed it up with his solid revenge thriller, Out of the Furnace, in 2013. Then, in 2015, he directed Johnny Depp in his best performance in years in Black Mass. In that film, Depp stars as real-life criminal turned FBI informant Whitey Bulger. All three films were mostly critically praised and have cemented Cooper as a filmmaker to keep an eye on.

Hostiles opens in 1892 with a Comanche war party attacking and slaughtering the Quaid family. The lone survivor, Rosalie (Rosamund Pike), narrowly escapes while her husband and children meet their demise. Meanwhile, Captain Joseph Blocker (Christian Bale) is tasked by his superior at Fort Berringer, New Mexico, Colonel Abraham Biggs (Stephen Lang), to escort the imprisoned Chief Yellow Hawk (Wes Studi) and his family back to their tribal lands in Montana. Yellow Hawk is stricken with cancer and is granted his request to be released. Joe is reluctant due to his history with Yellow Hawk but faces a court martial if he refuses. He assembles a group including Master Sergeant Thomas Metz (Rory Cochrane), Corporal Henry Woodsen (Jonathan Majors), and Lieutenant Rudy Kidder (Jesse Plemons), among others to escort Yellow Hawk. Eventually, the group comes across Rosalie and takes her in as well.

First and foremost, Hostiles features a stacked cast of actors and everyone is on their game. Christian Bale gives a typically great performance as Joe. He’s tough yet compassionate towards Rosalie and his men. Yet, you can tell that his character has experience many hardships during his time as a soldier. Wes Studi as Yellow Hawk rarely speaks but doesn’t need to. His stoicism emits a sense of pride and honor that Joe can’t shake with his early disrespect. Rosamund Pike gives the most emotional performance of the film as a broken woman. You’re never quite sure what she’s going to do as she has nothing to live for. The supporting cast does a good job as well with Rory Cochrane and Ben Foster in a glorified cameo as standouts. 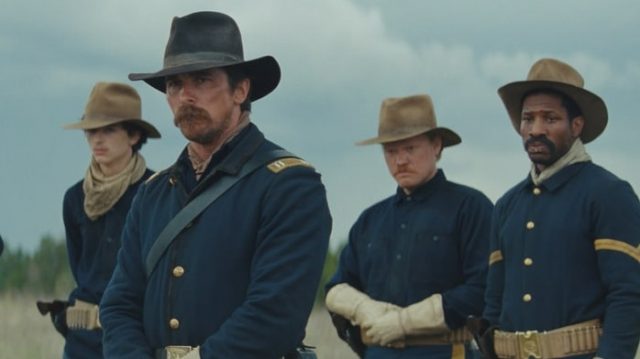 In addition to a great cast, the film looks and sounds fantastic. The group’s trek from New Mexico to Montana feels legitimate as they traverse different terrains and encounter weather hazards. Masanobu Takayanagi, who also worked with Cooper on Black Mass and Out of the Furnace, handles the cinematography here and does a great job accentuating the film’s vast landscapes. As for Max Richter’score, it matches up perfectly with the events onscreen. The music ebbs and flows as it parallels harsh battles, tense interactions, and emotional defeat of the film’s characters. The music is just as sprawling as the film’s locations and the two always sync up extremely well.

While there are many commendable things about Hostiles, it’s not all good news. The film’s first 45 minutes to an hour are absolutely tremendous. It opens with a brutally violent act of aggression that demands your attention. Then, the film continues to hold your attention with the introduction of its best characters. Unfortunately, the plot begins to lose its way quite frequently following Rosalie’s inclusion into the group. Oddly enough, it’s not that the character mucks up the plot in any way. It’s just that the screenplay is chocked full of random encounters with unrelated characters that are hastily introduced. While they mostly fit in with the film’s idea of introducing different types of “hostiles,” they end up taking away from the overall plot rather than enhancing it. It’s almost as if the screenplay forgets that it’s a movie and not just a real-life cross-country excursion. 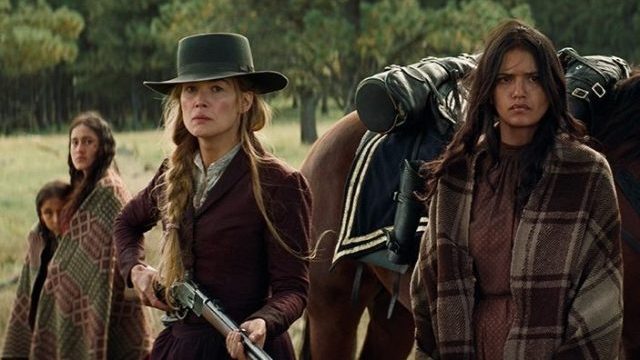 However, the biggest problem with Hostiles in general is its length. The film is far too long and it’s not even as long as something like The Revenant or even a classic western like The Good, the Bad and the Ugly. At 134 minutes, it’s only slightly longer than your average movie these days. Yet, with all of the extraneous sideplots and characters, the story’s main focus is often forgotten. By the time the ending finally rolls around, you’re more than ready for it. Even then, the ending feels like it goes on too long as well. Although the film never really loses your interest, it doesn’t really allow you to appreciate its message either.

If this review was covering just the first hour of the film, Hostiles would easily be five stars. By the time the main story is ready to be fleshed out, you’re ready to embark on this journey with the characters. It’s just too bad that the lengthy journey through the rest of the film feels about as long as it would actually take to ride from New Mexico to Montana on horseback. Even so, Hostiles isn’t a bad watch. Like Scott Cooper’s other work, there’s plenty to like even though each of his films tend to slightly underwhelm by their respective endings. For those who enjoy westerns, give this one a shot. For those who aren’t fans of westerns, it’s doubtful that you’ll make it much farther than the first hour.