It was only last year in our Annabelle: Creation review that we were talking about being in the age of the “film universe.” All of a sudden, it doesn’t seem like that’s entirely the case anymore. Obviously, the Marvel Cinematic Universe is still in full swing. However, DC Comics and their extended universe is essentially on life support following the bland flagship film, Justice League. Universal’s Dark Universe has yet to be heard from again since The Mummy bombed at the box office. Though, there is one universe that continues to chug along and do solid business as well. This past weekend saw the release of The Nun, the fifth film in the mostly reliable Conjuring universe.

As of now, the overall series includes both The Conjuring and its sequel, two Annabelle films, and now, The Nun. This new film was directed by Corin Hardy in only his second stint as a feature length director following 2015’s The Hallow. Series creator and director of the two flagship films, James Wan, returns to The Conjuring universe in a producer and co-writer capacity alongside Gary Dauberman.

The film opens in Romania in 1952 where two nuns are attacked. One is dragged away by an unseen attacker while the other commits suicide by hanging herself from a window. Her body is discovered by Maurice Theriault AKA Frenchie (Jonas Bloquet) on his supply route. From there, “miracle hunter” Father Burke (Demián Bichir) is assigned to investigate the suicide and is encouraged to take Sister Irene (Taissa Farmiga), a young novitiate, with him. After meeting up with Frenchie, the trio travels to the Cârța Monastery. Upon meeting the Abbess (Gabrielle Downey) and starting their investigation, strange occurrences begin and the mystery behind the vengeful Nun (Bonnie Aarons) unfolds.

For a horror film, the acting throughout The Nun is quite good. Demián Bichir has popped up here and there over the past few years and always puts in a quality performance. Though, his best by far was in Quentin Tarantino’s The Hateful Eight. Taissa Farmiga plays the younger, aspiring nun version of her older sister’s Lorraine Warren here. While some may see this as a handout given Vera Farmiga’s foothold in both Conjuring films, Taissa Farmiga has proven herself a fine actress as well. She’s most well known from FX’s American Horror Story television series. Her casting here works well for the character and, obviously, she’s a great visual match for the younger version of the elder Farmiga’s Lorraine. 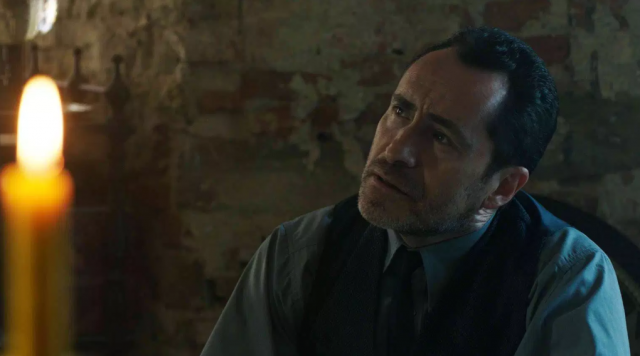 When it comes to visuals and atmosphere, The Nun is chocked full of both. A monastery in general is a great horror film location. There’s a constant hint of sadness, tragedy, and creepiness in every shot. Its dilapidated aesthetic mixed in with candlelight and archaic architecture always give off the feeling of dread. In the film’s more subtle moments, such as a crucifix in the background slowly turning upside down, everything seems to come together. It’s here you’re reminded that you’re watching a Conjuring film.

Unfortunately, though, that’s the closest that The Nun gets to satisfying The Conjuring itch. While the setting and atmosphere are good, the actual scares themselves are your typical horror fare. The film is jam packed with jump scares and shoddy CGI. In The Conjuring 2, where The Nun is introduced, her stoic visage is enough to send a chill down your spine. In this film, however, the filmmakers can’t help but piggyback Andy Muschietti’s 2017 It remake and give The Nun a set of razor sharp teeth to constantly flaunt. It’s understandable that they needed to add some new layers to the villain. Yet, everything that the filmmakers believe to be “scary” about the character rely on cliches and shock. The film maintains slight levels of subtlety but usually goes for the in-your-face approach more often than not. 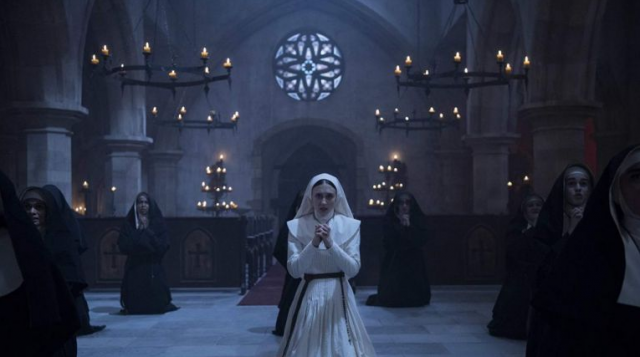 The other problem with The Nun is in its story itself. After the suicide at the monastery, Father Burke believes Sister Irene to have some special tie to Romania. This is a given since the Vatican required him to bring her with. As it turns out, she doesn’t have any ties to the region nor are we ever given a satisfying reason for her inclusion. This isn’t anything against the performances. It’s just bad storytelling. Though, there is a clever tie-in to the first Conjuring by film’s end which is nice. Essentially, the suicide angle is a vehicle to get characters to the monastery. Upon their arrival, horror happens. What kind of horror, you ask? The kind of stuff that may get a cheap jump out of an audience instead of actually putting fear into them. This is the biggest problem with mainstream horror films in general and its definitely on display here as well.

When it comes to The Conjuring films in general, there’s a big gap in quality. The two namesake films are both required viewing for horror fans. They do take some liberties and aren’t entirely original but both are done very well. The first Annabelle film is absolute garbage and is the lone black spot on the franchise. Its prequel (yes, the timeline does jump around with each release) is decent but not up to the level of The Conjuring. For the most part, this is about where The Nun falls as well. It’s nowhere near as impressive as the main films but is worlds better than Annabelle. Unfortunately, the jump scares, lame story, and run of the mill CGI set this one back quite a bit. If you’re a Conjuring fan, you’ll find some things to like but, for casual fans, just stick to the flagship series.