There’s something about a coming-of-age story that seemingly always gets people talking. Classic films like Stand By Me and The Breakfast Club all the way to recent films like Boyhood, Lady Bird, and Eighth Grade all have touching and relevant stories to tell. This remains true in the horror genre as well. Specifically, foreign horror films have done an excellent job using a slow burn approach while showing transitions from childhood to adolescence to adulthood. While not strictly a horror film, Swiss director Lisa Brühlmann’s debut feature, Blue My Mind, centers on a teenage girl’s struggles with family, relationships, and her passage into womanhood with a satisfying splash of body horror added in.

The film follows 15 year old Mia (Luna Wedler) as she adapts to life  being transferred to a new school. Upon her arrival, she longs to befriend a group of girls led by Gianna (Zoë Pastelle Holthuizen). Though the girls’ hobbies include petty theft, partying, and engaging in sexual acts, they accept the vulnerable Mia into their group anyway. Soon, Mia gets her first period and her body begins to go through the usual, and some more unusual, changes. Her family life suffers, her friendships become more complicated, and her sex drive is piqued. As Mia’s transformation spins out of control, she does everything she can to stop it before it completely consumes her.

First off, the physical transformation aspect of the film won’t be ruined here. Though, it’s hard to say whether or not it’s more beneficial to know what’s happening beforehand or not. Throughout the promotion and media coverage of the film, the ending twist hasn’t especially been kept secret from potential audiences. Personally, I knew what to expect when going into the film and it didn’t ruin the experience whatsoever. Yet, it did build anticipation. Regardless, the twist won’t be spoiled here but, luckily, you don’t have to dig too deep online to find it if you so choose.

Getting into the film itself, there’s a lot to discuss. Immediately, you notice how technically impressive Blue My Mind is. The cinematography and camerawork are excellent from the opening beach scene onward. At times, the film can be somewhat graphic with some discomforting scenes that aren’t overly gory but there’s a realism to them. There are also scenes featuring nudity and sex acts that may turn off some viewers. There’s nothing insanely graphic but it’s something that should be addressed either way. Aesthetically, the film has a sort of sterile and clean look to it. This helps push the more uncomfortable scenes when Mia begins going through her changes. Beneath the facade of Mia’s normal and organized life, there’s something impure and distressing. The look of the film conveys this idea perfectly. 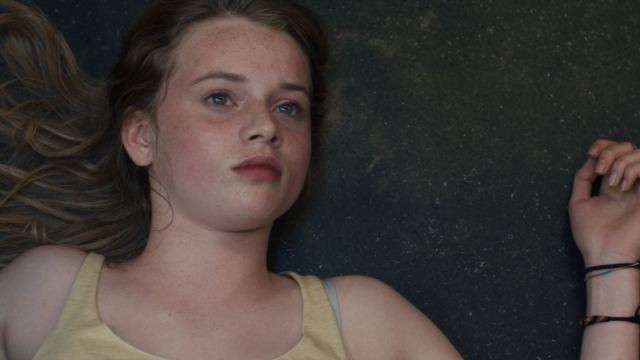 Blue My Mind‘s minimal usage of horror is something that’s often expected in these coming-of-age style films. Films like Let the Right One In and Raw immediately come to mind as the horror doesn’t necessarily come from blood, gore, and killing. It comes from a fear of the unknown and of change. Puberty is something that everyone goes through and is relatable to both males and females. Mia doesn’t know what’s happening to her body and, the more she strays from her innocent path, the more severe the repercussions become. On a sidenote, the special effects and makeup during Mia’s transformation are fantastic. The final scenes are visually impressive but so uncomfortable to watch while being somewhat heartwarming in a very odd way.

What really makes the film tick, though, is its lead performance from young Luna Wedler. She’s able to juggle so many different emotions and traits to make her an extremely complex character. There’s an air of innocence to her, especially when first joining up with the other girls, that’s eventually stripped away in convincing fashion. In many ways, she’s like Sissy Spacek’s Carrie White from Brian De Palma’s 1976 film, Carrie. Of course, both young women get their periods for the first time in their respective films. From here, Carrie develops telekinesis while Mia’s changes are more physical. In Blue My Mind, Mia isn’t quite the outcast that Carrie is. However, she still does things that had been previously uncharacteristic to her. The rest of the cast puts in solid performances as well with Zoë Pastelle Holthuizen’s Gianna and Regula Grauwiller’s as Mia’s mother as the main standouts. 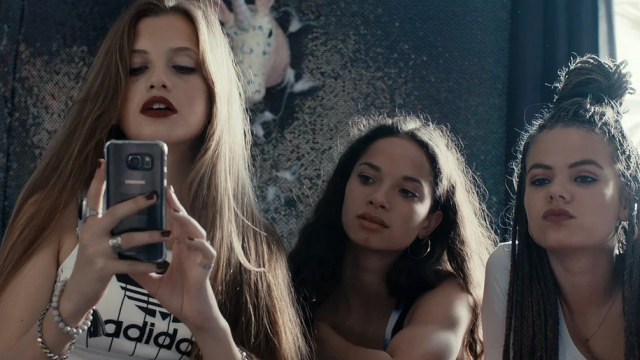 The one major negative in the film is in its pacing. While all of the scenes do feel necessary and work to further establish the character of Mia, there are instances where the plot starts to meander. At times, scenes go on for too long and Mia seems to forget about how her body is negatively changing. Much of the middle portion of the film goes without referencing back to this until, suddenly, Mia gets a sudden craving that she previously had earlier in the film. Ultimately, the transformation is gradual but it feels like more could’ve been done with it before the final scenes. That being said, the film is only 97 minutes long so it doesn’t make you wait too long either. That’s not to mention that the ending is well worth sticking around for.

Blue My Mind is the type of film that may need repeat viewings to fully appreciate. It’s not difficult to understand but there are just so many different things going on, mainly in its relationships. Mia’s evolution brings up a number of different discussions and interpretations that you just don’t get frequently in horror. Again, this isn’t a strict horror film but there are definitely tinges of the genre sprinkled in. Its usage of the body horror sub-genre is a call to a film like David Cronenberg’s The Fly and the special effects are up to snuff in that regard as well. While Blue My Mind may not end up as a classic coming-of-age story, it shares some excellent company and does plenty to stand on its own merits as well.

*Blue My Mind is currently available for rent or purchase on video-on-demand platforms like YouTube and Amazon.*