As everyone knows by now, the world is in a very precarious situation at the moment. With the COVID-19 pandemic still in full swing, no one really knows when or if things will return to some semblance of normalcy. For those living in the United States, there’s also an ugly upcoming presidential election that divides the country even further. With the state things in 2020 mixed with the never-ending threat of nuclear war that’s been hanging around for decades, the future looks pretty bleak. Writer/director Brian Butler somewhat unknowingly explores a possible future if things continue at their current rate with his debut feature film, Friend of the World, which saw its world premiere this past weekend.

The film follows a young filmmaker named Diane Keaton (Alexandra Slade), the sole survivor of a brutal attack in a mostly abandoned military bunker. Diane makes her way deeper into the bunker while trying to escape when she happens upon the crass General Gore (Nick Young). Gore himself has survived the fallout of a catastrophic war and now takes in young Diane. The two set out to see who (or what’s) left in the world around them. Though, Gore may potentially harbor some secrets about what he knows as Diane seeks transparency.

It should be stated that Friend of the World is not a product of the pandemic. It’s only coincidence that viewers can relate the current health crisis in the world to Butler’s work. While talk of the issue has been nearly inescapable for almost all of 2020, the film was actually written back in August 2016 with principal photography in May the following year. Due to a lengthy post-production process, the film wasn’t completed until January 2020. Of course, COVID-19 hit soon after and the film was delayed again before finally premiering this past weekend during the virtual Oceanside International Film Festival. While the coronavirus disease isn’t turning people into the humanoid monsters featured in Friend of the World, it’s a freak occurrence that the film would be delayed to this exact moment in time considering its portrayal of the world’s potential post-apocalyptic future stemming from both disease and war. 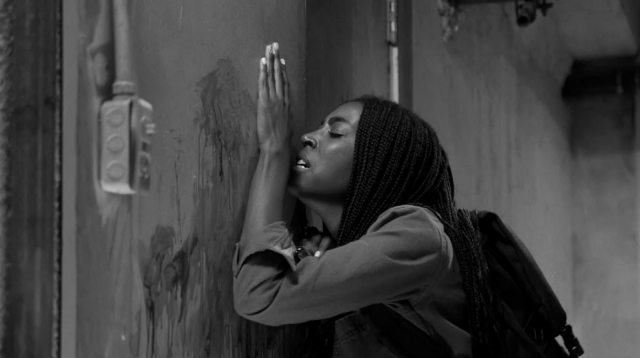 Friend of the World also feels like a natural continuation of our current world due to its characters. There are some generalized archetypes here with the young, millennial artist clashing with the older dedicated military man. It’s true that people have gone soft in recent years and this sentiment is most certainly shared by Nick Young’s General Gore. He doesn’t believe that Diane has a fighting chance to survive the world without him as he harshly prepares her for the challenges they face. Young is definitely the standout of the film as the amusingly gruff Gore has a sort of despicable swagger. For some reason, Powers Boothe’s performance as Senator Roark in the Sin City movies comes to mind here. Alexandra Slade as Diane does seem to embody that more liberal approach as her and Gore clash. She’s the common woman that viewers are able to relate to and does a good job in that respect. Despite being polar opposites, Slade’s Diane and Young’s Gore stick together even though uncertainty constantly surrounds their partnership.

When it comes to the look, feel, and style of Friend of the World, many different films come to mind but it also never feels like the film borrows too heavily from anything. The film feels like a piece of early cinema with its black and white aesthetic, brief fifty minute runtime, and small sets. This isn’t a knock on the film whatsoever as it’s what sets Friend of the World apart from other independent science fiction films. Sci-fi is a difficult genre to do on a lower budget without feeling cheap but Butler and company do wonders. The film’s portrayal of sci-fi/body horror in the vein of John Carpenter’s The Thing should impress and satisfy genre fans while the overall tone feels like Night of the Living Dead by way of Terry Gilliam. There are many comparisons one can make but, again, Friend of the World still feels like its own entity as well. 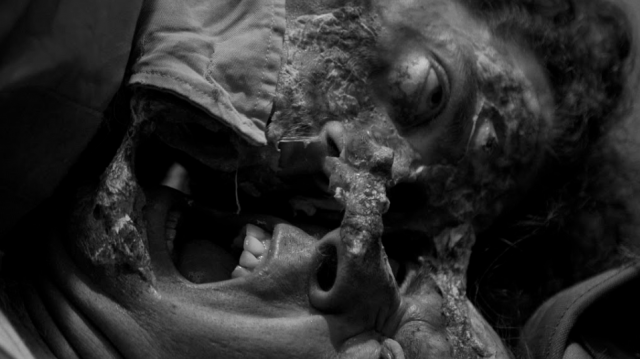 If there’s one spot that the film falls short, it’s in the actual storytelling. At only fifty minutes, the story flies by and isn’t given a whole lot of time to breathe and reveal itself naturally to the audience. Important plot points are relayed via quick character dialogue and cassette tapes which minimize any revelatory impact. Also, the film is separated into chapters with some choppy editing at times that will often leave you confused and disoriented. Much of the story is set up almost as a play and the editing seems to enforce that as the break between each “act” seems hollow and empty. In many cases, it seems like some independent filmmakers will stretch a story out to a full ninety minutes when they don’t have enough content. With Friend of the World though, it sometimes feels like there’s ninety minutes of content compacted into its fifty minute runtime.

However, the film is full of intrigue, mystery, horror, and uncertainty. For this, Friend of the World certainly warrants a watch for sci-fi and horror fans alike. Its nightmarish and claustrophobic setting will have viewers on edge while the performances, especially from Nick Young, keep you invested. Though we knocked it a bit for maybe being too short and not developing a deeper story, this is a film and world that we want to see more of. How did things get to this point? What happened to General Gore and the rest of the people that must’ve been in this military bunker? Questions remain all over the place and there’s a lot to work with if Butler wanted to continue with additional installments. As it stands, Friend of the World is a throwback science fiction/horror experience bursting with more tales to be told. You may not get everything you’d like out of this one film but there’s no doubt that it’ll leave your mind racing by its end.

*Friend of the World made its world premiere this past weekend during the Oceanside International Film Festival. It’s currently available to watch here with a purchased event pass. Check out the trailer below.*