Within the horror genre, found footage films have often been a go-to for filmmakers. Films like Cannibal Holocaust, The Blair Witch Project, and the Paranormal Activity series have all benefited from the sub-genre. There’s something about an end product that maintains a sense of realism that just seems to work in horror. In recent years, though, found footage has lost some of its luster due to overuse. Luckily, there’s still some life in the sub-genre due to the indie horror scene. This especially rings true in the DVD-only release, Hell House LLC, which is available for purchase as of today.

The film, written and directed by Stephen Cognetti, was shot in May 2014 while Cognetti was working another full time job. Thus, the editing process took a year to complete. Given the fact that the film is a mixture of faux-documentary, newsreel, and found footage, the editing is an integral part of the production. Needless to say, Hell House LLC is an ambitious project and a product of dedication from its creator.

The film centers on a tragedy that takes place at a haunted house on October 8, 2009. A supposed malfunction leaves fifteen tour-goers and staff dead on opening night. As previously mentioned, the story is told via documentary footage of an author, journalist, witness, and the only surviving employee of the titular Hell House. Spliced in between the documentary is mostly video from one of the employees chronicling the renovation of the abandoned Abaddon Hotel into the haunted house and the terrors that the crew endured while staying there.

In a film that has many different styles clashes in terms of substance, Hell House LLC actually excels. The editing and its content all fits perfectly together. All of the scenes feel necessary to the overall story of the tragedy. During the documentary scenes, the author, Robert Lyons (Theodore Bouloukos), and the journalist, Martin Cliver (Jeb Kreager), recount the grisly events of the tragedy in 2009 along with the Abaddon Hotel’s mysterious past. It works extremely well to set the pace of the film and almost feels like something out of Travel Channel’s The Dead Files at times. 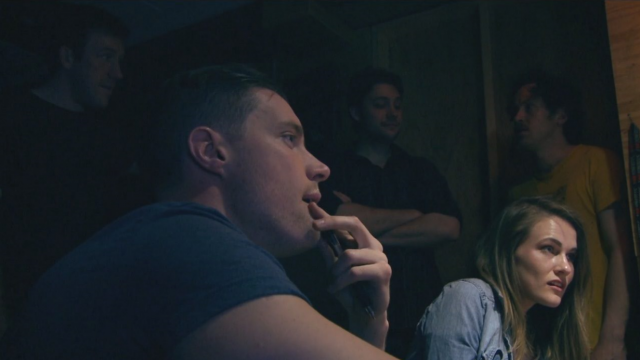 As far as the acting goes, it’s very good across the board. Sometimes indie films in general can have some hokey acting but Hell House LLC doesn’t have that issue. The five main employees of Hell House are mostly distinguishable despite some early confusion as to who’s who. That’s more of a testament to the film being found footage as opposed to an actual issue though. The Hell House crew is made up of Alex (Danny Bellini), the obsessive owner/founder of Hell House, his girlfriend and sole survivor, Sara (Ryan Jennifer), his best friend, Mac (Adam Schneider), and his first two hires, Paul (Gore Abrams), and Tony (Jared Hacker). The minor annoyance with any of the acting is that Paul, the employee documenting the renovation, sometimes goes from zero to sixty in terms of his emotions.

The most crucial aspect of Hell House LLC, or any horror film for that matter, are its scares. For the most part, Cognetti delivers them here. Many are your typical haunted house fare but its the subtleties that make them so unnerving. Without spoiling anything, there are a lot of small details caught on video that the audience may notice that the characters don’t see right away. There are also some eerie parallels between the found footage and still photos presented in the documentary. This includes an extremely effective use of Google Street View at one point that’s very creepy in its own right. These details make the viewer feel like they know the layout of the hotel and feel like a part of the story. 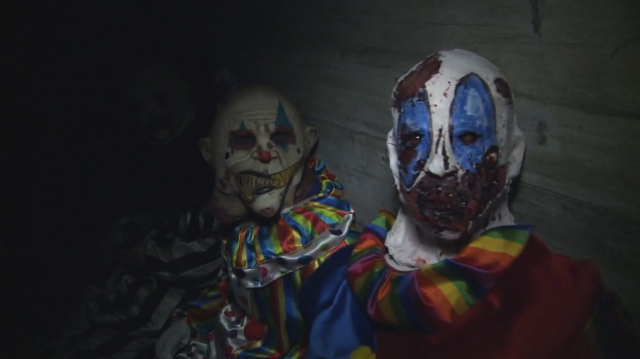 While there really aren’t many glaring problems with Hell House LLC, the ending feels a little underwhelming. Cognetti stated in an interview with Found Footage Critic that many reasons, including budget constraints,led to the ending scenes not being fully realized. Another thing that could’ve been addressed more in the film was the history of the Abaddon Hotel. Obviously, there’s some history in the film but it feels like there should be more to the checkered past of the hotel than what is given. Though, Cognetti states in the same interview that both of these things will be addressed in future sequels of a planned trilogy.

In short, Hell House LLC is a breath of fresh air in a somewhat tired sub-genre. The level of intrigue in the story is through the roof every step of the way. With every scene, you want to know more about what happened in the Abaddon Hotel’s past, how it affects the renovation by the Hell House crew, and what exactly happened during the 2009 tragedy. There are a lot of questions left unanswered but, in this case, that’s not necessarily a bad thing. With his planned trilogy, Stephen Cognetti should have plenty to work with to produce two quality sequels. If you’re a horror fan, and especially one who enjoys found footage films, then you simply can’t pass up Hell House LLC.

*Hell House LLC: Director’s Cut DVD is available for purchase on DVD right now at this location. The standard version of the film is available to watch on nearly every video-on-demand platform including Amazon Prime.*