Last October, we reviewed an independent film from writer/director Stephen Cognetti called Hell House LLC on this site. The film boasted an impressive clash of styles that ranged from typical found footage horror to faux-documentary and newsreel recordings. The plot sought to document the October 8th, 2009, tragedy that befell the titular Hell House, its patrons, and its crew when fifteen people were mysteriously killed in a supposed malfunction. With Hell House LLC II: The Abaddon Hotel, Cognetti and company return to elaborate on the strange goings-on with the former hotel turned haunted house.

The film picks up eight years after the tragedy at Hell House. Investigative journalist Jessica Fox (Jillian Geurts) receives an anonymous tip that evidence regarding the property’s deadly past is hidden within the hotel. She assembles a team to break into the abandoned Abaddon Hotel and uncover its mysteries. Among them are her co-workers, Molly Reynolds (Joy Shatz) and David Morris (Dustin Austen), documentarian Mitchell Cavanaugh (Vasile Flutur), and questionable psychic medium Brock Davies (Kyle Ingleman). Of course, like all who came before this group, the Abaddon Hotel sucks each person in and doesn’t allow them to leave

One of the best things about the first Hell House LLC was how seriously the story was taken. It often felt like a legitimate documentary and it made viewers want to know more about the hotel’s history. The idea of a sequel was actually welcome as it felt like there was much to explore. Unfortunately, Hell House LLC II: The Abaddon Hotel simply feels like more of the first film. It does attempt to expand slightly on the mysteries but it doesn’t seem to fully embrace this exploration either. The Hell House crew from the previous film isn’t forgotten as the new group seeks to discover what happened to them. While this seems fine, it still doesn’t elaborate on how and why the Abaddon became the haunted attraction that it is. 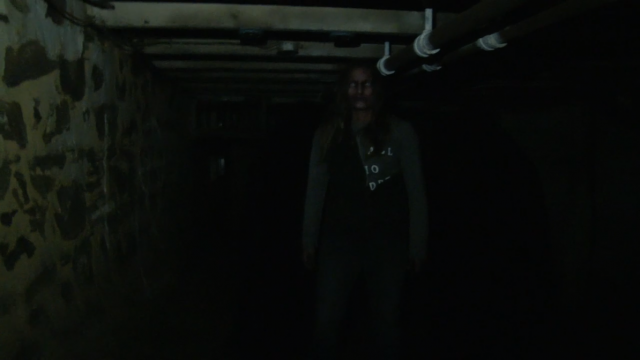 Much of that has to do with the storytelling style in this new film. Whereas the first Hell House LLC played out like a documentary, the sequel traverses the overly familiar found footage route. In typical fashion, the characters decide to be ghost hunters and see the horror for themselves. This type of story feels unoriginal, predictable, and, again, very familiar. Yes, the first film also featured a lot of found footage from the Hell House crew. However, that wasn’t the only way that the story of Hell House and, by extension, the Abaddon was told. An author, journalist, witness, and survivor all provided their own spin on things in addition to the footage. In this new film, the group’s camera exists only to show the events they’re encountering.

Now, this isn’t to say that there’s nothing interesting about the film. There’s an attempt to mix the hotel’s past into its present and future. The film’s third act specifically does tread some intriguing new territory. As you learn more about the hotel itself, it makes you wish that the whole film focused on this idea. Though, a straightforward narrative style and camerawork would’ve suited the story much better. Again, the found footage style definitely hamstrings the plot and makes it difficult to explore this environment and all of its thrills to their full potential. Imagine if The Shining was shot by Jack Nicholson using a handheld camera throughout the film’s entire runtime. It makes the world more difficult to get absorbed in and relies too much on genre tropes. 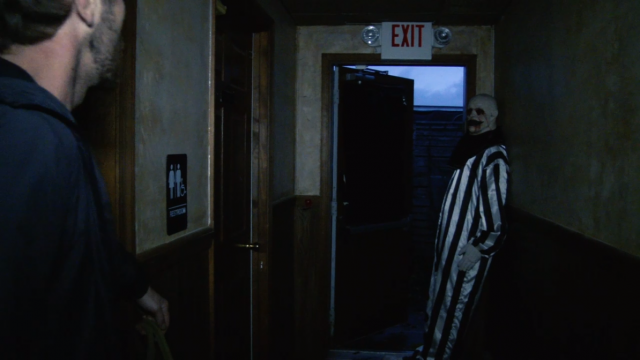 Does all of this mean that Hell House LLC II: The Abaddon Hotel is bad? Actually, no. Stephen Cognetti proves once again that he’s able to provide some legitimate scares with his minimalist style. The jump and false scares that plague many horror films are often avoided as subtlety and eerie visuals take precedent. At one point, even a creaky door incites a jumpy reaction from viewers. In addition, there’s a wave of nostalgia as you see new characters enter the familiar Abaddon Hotel. Cognetti does a great job reminding people of the terrors that awaited in the halls from the first film and gives them new life here. One of the most effective scares reintroduces the evil clown mannequin from the first film. The sequel’s scares remain on par with the first film and that’s a feat in itself.

While Hell House LLC II: The Abaddon Hotel is most certainly inferior to the original, there’s still plenty to like. Its familiarity is a double edged sword as it works in its favor when linking both films. Though, its familiarity to the horror genre and especially ho-hum found footage films works as a detriment to an otherwise interesting idea. The biggest problem with Hell House LLC II is in its style and it’s not the first sequel to be bogged down by that. A more standard approach probing into the history of the hotel while eliminating the investigative reporting storyline could’ve made for a more interesting film overall. Regardless of its shortcomings, the film still offers up some good horror and displays Cognetti’s understanding of the genre. It may not reach the heights of its predecessor but it’s still a necessary watch for fans of the original.

*Hell House LLC II: The Abaddon Hotel is currently available exclusively on Shudder, the horror streaming service. It will be made available on other video-on-demand services like iTunes and Amazon on January 4th.*