Not all horror films used to be blood and guts as many of today’s are. Horror used to be an art form which focused more on the psychological aspect than physical brutality. There’s something that can be terrifying about every day life events if done properly. Director/screenwriter Roman Polanski had already tried his hand at psychological horror with his 1965 film, Repulsion. However, it wasn’t until the 1968 adaptation of the Ira Levin novel, Rosemary’s Baby, where Polanski would master the feeling of paranoia, depression, and helplessness on film.

Rosemary’s Baby, like Repulsion before it, is a different kind of horror movie. As opposed to recent films in the genre, it’s more about what you don’t see than what you do. It excels at heightening suspense and expectations of something terrifying happening. If you’re expecting jump scares and gore, they won’t be found here.

The film focuses on a married couple that moves into a new apartment building. Upon moving into the building, Rosemary Woodhouse (Mia Farrow) and her husband, Guy (John Cassavetes), befriend an elderly couple, Roman and Minnie Castevet, played by Sidney Blackmer and Ruth Gordon. Eventually, Rosemary becomes pregnant but also sickly thin and pale. Thanks to information from her friend, Hutch (Maurice Evans), Rosemary believes that the Castevets are actually witches who want to take her baby.

The true horror of the film stems from the character of Rosemary herself. Soon after her conception, she’s treated poorly by Guy, who’s obsessed with his budding acting career. As previously mentioned, her figure becomes quite alarming as well. The other characters constantly comment on how bad she looks. She also experiences intense pain that her doctor, Abe Sapirstein (Ralph Bellamy), shrugs off. 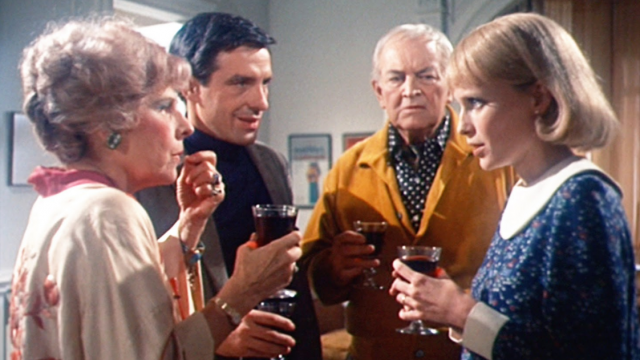 The acting, although slightly hokey at times, is great. Mia Farrow is at her best when her suspicions are aroused and she suffers a mental breakdown during her pregnancy. She constantly flips between normal and psychotic as she learns new information regarding the other characters. As a viewer, it’s easy to do the same as you’re unaware as to whether Rosemary is actually going insane or her mistrust is well placed. The late John Cassavetes as Guy is also fantastic as his performance is frighteningly natural throughout Rosemary’s struggles. As someone who’s focused so much on his career, he rarely shows intimacy towards Rosemary. He always seems to worry about their overall image especially in front of the Castevets.

Speaking of which, Roman and Minnie are quite the characters themselves. Their bright, eccentric costuming and overwhelming personalities affect the viewer as much as Rosemary. One moment, they seem full of warmth and compassion and then in the next they are overstepping their boundaries to pry into Rosemary’s personal life. Minnie especially wears out her welcome with her barrage of personal questions and insistence to play by her rules. Gordon won an Academy Award for Best Supporting Actress for her role in the film. 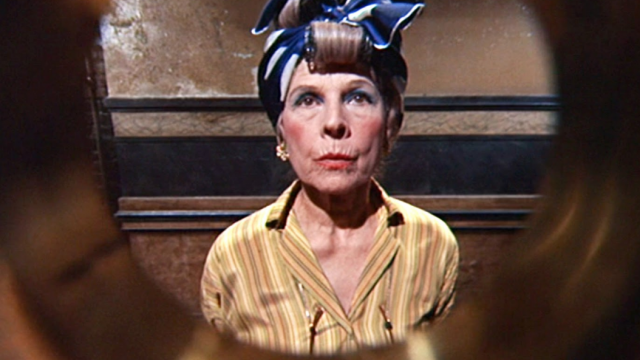 Another highlight of Rosemary’s Baby is the music. It’s simple yet chilling. The main theme is a lullaby entitled “Sleep Safe and Warm” AKA “Rosemary’s Lullaby.” Basically, this one piece is used in numerous different parts of the film with minor changes in key and tempo. Regardless, the song works in all respects. It’s able to be somber and even joyful at times. This was the fourth collaboration of composer Krzysztof Komeda with Roman Polanski.

It must be noted that Polanski’s ability to instill psychological fear throughout Rosemary’s Baby shouldn’t go unnoticed. Polanski is, in fact, a holocaust survivor who’s still hard at work today. On top of that, shortly after the release of this film, Polanski’s then-wife, Sharon Tate, was brutally murdered by the Manson family at their home. Following both of those horrific events, Polanski fled to Europe following a sexual abuse case after having relations with a 13 year old girl. Polanski’s decision to flee came after the judge assigned to his case planned on sentencing him to 50 years in prison despite time already having been served and an accepted plea bargain. It’s no doubt that Polanski has suffered through many ordeals in his life and his work in film certainly reflects that.

To reiterate, Rosemary’s Baby is not what you’d normally consider a horror film. Its mental torture and anguish for the main character goes unparalleled. There are aspects of the film that are definitely shocking but it’s not what’s expected from today’s standards. This is one of the rare occurrences where a master filmmaker was able to craft an experience without the use of excess. It’s the subtleties, real life scenario, and uneasiness of the characters that create terror. The film was even selected for preservation in the National Film Registry by the Library of Congress. It’s no doubt that Rosemary’s Baby is one of the greatest psychological horror films ever made but is still criminally underrated by the general public.