Halloween 2020 may be long gone by this point but that doesn’t mean that we can’t still talk horror films. Today, we’re going to rewind a little bit and cover one that we weren’t able to squeeze in at the end of October. While Jordan Peele has been all the rage for his horror films centering on people of color, it’s surprising how acclaimed his work truly is. Both Get Out and Us were solid films but Peele’s overall stories and execution have always been half baked. In contrast, newcomer Remi Weekes seems to have figured out something that Peele has not. Weekes’ debut feature, His House, which released on Netflix recently, is not only subtle in relaying its creepy horror tale but Weekes also provides an ambiguously satisfying conclusion to his film as well.

His House centers on Bol (Sope Dirisu) and Rial Majur (Wunmi Mosaku), a refugee couple who’ve fled to an English town from South Sudan. During their escape from war-torn Sudan on an overcrowded motorboat, the couple’s daughter, Nyagak (Malaika Wakoli-Abigaba), doesn’t survive the stormy journey across the sea to Europe. Regardless, Bol and Rial do their best to move on and start a life in their new home provided by the government as they’re threatened by deportation if they don’t abide by the strict rules laid out for them. Bol tries to adapt to life by doing things to fit in with the locals while Rial holds onto their people’s customs and traditions. All the while, both start to experience things in their home as the ghosts of their past come back to haunt them.

While Jordan Peele provided social commentary on race relations in Get Out, Weekes does a much better job subtly tackling race here in His House. As Bol and Rial arrive in the outskirts of London, they’re met with negativity from the people in their neighborhood. They’re often looked at with disdain or treated like they’ve been handed everything. Though, the attacks aren’t just related to skin color as Rial specifically has an uncomfortable interaction with a group of local boys who tell her to go back to Africa. The problem that Bol and Rial face is maybe that they’re refugees and not just that they’re black. This is a relief as far too many films try to drive a wedge between different races and spread an agenda instead of focusing on telling a good story. Filmmakers such as Spike Lee are notorious for this. Again, there’s a subtlety to Weekes’ approach where race and cultural relations are touched on but don’t necessarily get in the way of creating a story for viewers to get lost in either. 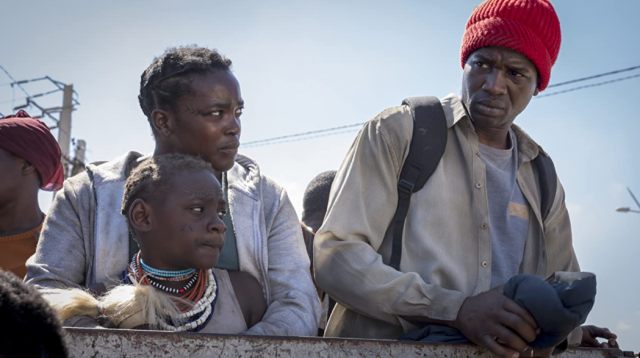 Much of this has to do with the fantastic character work throughout the film. Sope Dirisu and Wunmi Mosaku as Bol and Rial respectively are fantastic. Bol is a hopelessly optimistic character believing that their escape from Sudan marks the start of a better life. He immediately tries to assimilate and leave his culture behind. On the opposite side of the spectrum is Rial who refuses to forget who she is or where she came from. She’s constantly haunted by specters of her past but seems to be at peace with them. Even as the horrors confined within their new home begin to set in, Rial is accepting of them while Bol tries to repress them. Dirisu especially gives an Oscar worthy performance of a man who’s lost his place in the world and is seemingly unfit to handle the anger, sadness, guilt, and regret that he’s built up throughout his life.

To this point, we’ve said almost nothing about His House in reference to the horror genre. Basically, that’s because the film really isn’t set up like a traditional horror film. A lot of it is more about real-life horror than the supernatural kind. The long running South Sudanese Civil War is more terrifying than any type of ghost story for the real people experiencing it. The prejudices and uncertainty refugees face when being dropped in a totally new location offers different challenges to overcome while so many expect them to fail. The suffering of loss and the overwhelming guilt one must feel is horrific in its own right without being tormented by the supernatural.

Of course, the ghost story portion of His House does certainly have its own appeal too. Weekes does a phenomenal job building suspense through camerawork, lighting, sound design, etcetera. You always know that something’s coming but you don’t know from where or when. Some of the scares are jump scares but they’re also tasteful and well timed. The film felt like Ari Aster’s Hereditary in a lot of ways. Its focus on the family unit and the complete psychological breakdown of its lead characters makes for an emotionally distressing experience that’s quite rare in the horror genre. While there’s a lot that can be dissected about His House that isn’t traditionally horror related, make no mistake that this is a horror flick and it will creep you out early and often. 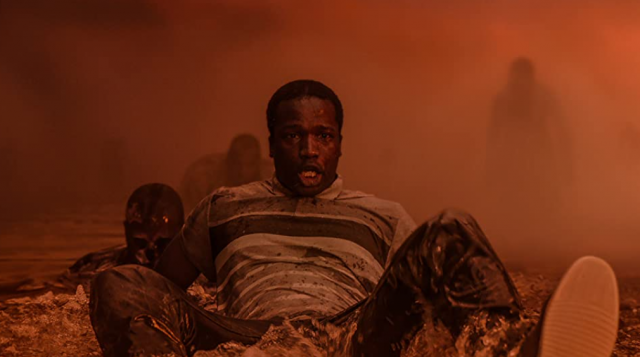 It’s actually pretty difficult to come up with criticisms of His House as the film really delivers on all fronts. The one main one, though, is that the film can be confusing at times. At 93 minutes, there isn’t a lot of downtime once the plot gets moving and the ending hits you in rapid-fire fashion. The deliberate pacing and slow burn approach of something like Aster’s Hereditary or Midsommar isn’t employed here. There are time jumps, memories, hallucinations, and disorientation of all kinds in His House. While it may not be difficult to understand what’s going on in terms of story, you may find yourself questioning what’s fact or fiction back in the real world which can slightly taint the overall enjoyment of the film.

That being said, Remi Weekes’ His House is quite a feature debut for the filmmaker. Again, at only 93 minutes, it’s surprising how dense the film is in terms of content, substance, and commentary. There’s so much to unpack with the situation in Sudan, the family dynamic, refugee/local relations, and classic haunted house story and all of these things are balanced very well throughout the film. We can’t even get into the film’s revelatory moments due to spoilers but let’s just say that you won’t see them coming. While many horror fans have been looking forward to whatever Jordan Peele does next, we’ll take whatever Remi Weekes does instead if it’s going to be on par with his work on His House.

*His House is currently available for streaming on Netflix.*