When it comes to horror remakes and reboots, the new films typically have very little to do with their predecessors. Yes, there are often some not-so-subtle nods to events that may have happened in an original film or series and, obviously, cash-cow characters always make an appearance. One thing that’s hardly ever seen is a main creative force from an original franchise returning for an updated installment. Surprisingly, this is the exact case with Fede Alvarez’s 2013 reboot of Evil Dead.

1981 saw the release of Sam Raimi’s cult splatstick classic, The Evil Dead. The film was very low budget but, due to its amazing practical effects, psychotic zombie-like creatures later known as Deadites, and the emergence of a young and charismatic Bruce Campbell, The Evil Dead was a hit. The film spawned a sequel, Evil Dead II, which is most often identified as a remake of the original given its similar plot, that’s even crazier than its predecessor. It was Evil Dead 2 where Bruce Campbell’s Ash Williams was solidified as a cult icon within the horror genre. A third installment, Army of Darkness, was released in 1992 and bucked its horror tropes as a medieval time traveling comedy with Campbell, again, front and center.

For years, fans clamored for another Evil Dead sequel that would never come. Though, there were video games, comic books, and even a musical to tide fans over. Eventually, a television series, Ash vs Evil Dead, would run for three wonderfully gory seasons on Starz. However, a seemingly forgotten remake landed in theaters a few years before the Ash vs Evil Dead premiere. Shockingly, the producers of the original film, Raimi, Campbell, and Robert G. Tapert, returned to the franchise for the 2013 version of Evil Dead as well. The film was actually a very good attempt at resurrecting the franchise and an underrated horror film in general.

The film follows a group of five friends who travel to a dilapidated cabin in the woods. Here, the group gathers to support their friend, Mia (Jane Levy), a recovering drug addict. Mia’s brother, David (Shiloh Fernandez), is informed of Mia’s past attempts to get sober and that the others in the group, Olivia (Jessica Lucas), Eric (Lou Taylor Pucci), and Natalie (Elizabeth Blackmore), all intend on ignoring Mia’s anticipated requests to leave the cabin. As Mia goes through withdrawals, she also suffers a mental breakdown that she blames on the haunted cabin. While her friends refuse to let her leave, a mysterious force in the woods torments Mia and the others following a startling discovery in the cabin’s cellar. 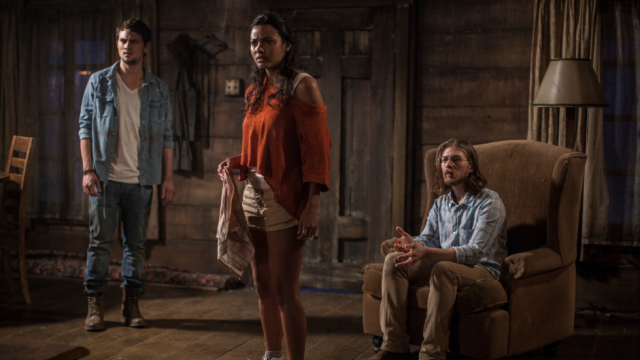 Within the Evil Dead franchise, pretty much anything is possible in terms of a plot. The films, TV series, video games, and comics aren’t really limited to a strict formula as many traditional horror films are. As long as there’s the Necronomicon AKA Book of the Dead and madness ensues, you can have an Evil Dead story. The events of Ash vs Evil Dead begin because Campbell’s Ash gets high and reads some of the Necronomicon to a prostitute. Seriously. Regardless, this 2013 film actually has a pretty good plot. Given Mia’s drug history, the group has a reason to keep her in the cabin even though there’s definitely something off about it. In addition, Mia is initially the only one experiencing supernatural occurrences. Her friends write them off as withdrawals and a manipulative tactic to not go through with her cold turkey rehab. Overall, this film feels a little more structured than its predecessors. It feels as if there’s rhyme and reason behind the different possessions that occur. Where Raimi’s films sometimes feel like anything goes, this one has a logical progression.

One of the first things you’ll notice about the film is that there’s no Ash Williams. For a horror reboot, this is some dangerous territory especially since there’s no name villain associated with the series. Other franchises like Halloween, Friday the 13th, and A Nightmare on Elm Street have a character that the titles are synonymous with. The closest thing Evil Dead has to that is Ash. While Bruce Campbell is certainly the star of all things Evil Dead, he’s actually not a glaring omission in the 2013 film. The main reason being that this is a different kind of Evil Dead. This film is structured more around the psychological torment of Mia and the physical danger that the characters of David, Olivia, Eric, and Natalie face. Jane Levy absolutely steals the show as Mia. Whether she’s a suffering drug addict, a terrified victim, or a bloodthirsty Deadite, her performance is excellent. The other cast members don’t slouch either as each of them have a role to play in the story. Aside from Levy, Jessica Lucas as Olivia is probably the biggest standout. Elizabeth Blackmore’s Natalie is the odd woman out as she finds herself with little to do initially. Though, she does have an excellent scene late in the film. 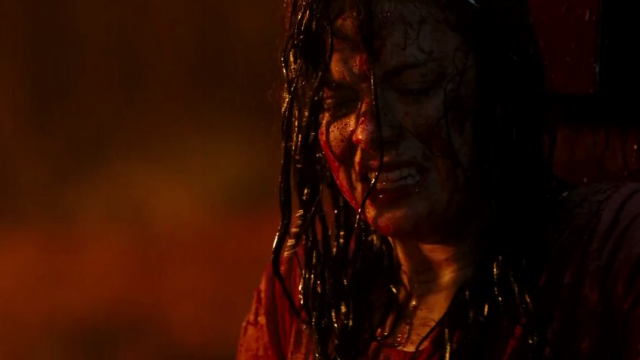 Even though there’s some good character work in Evil Dead, that’s not why we’re here. Fans of the series want all the blood, guts, and gore they can handle from the franchise and Fede Alvarez’s 2013 film delivers in spades. Supposedly, 70,000 gallons of fake blood were used throughout the film opposed to the original Evil Dead‘s couple hundred gallons. Needless to say, it shows. Thankfully, the filmmakers also stuck to using practical effects instead of CGI and this is evident as well. Enough can’t be said for the use of practical effects. There’s never a time when you don’t believe what you’re seeing onscreen because the film looks so damn good. Earlier this month, we praised Chuck Russell’s The Blob for its practical effects. Both of these films go to show that no matter the year or methods used, practical effects will always trump computer generated ones. This film’s Deadites are wonderfully gruesome and disturbing. The main difference between the original series and the 2013 installment is that the latter leaves very little room for comedy. Again though, in this post-Ash Williams Evil Dead, the change is welcome.

There simply isn’t enough praise that can be heaped on Alvarez’s Evil Dead. This is how horror remakes and reboots should be made. The absence (mostly) of Bruce Campbell is probably the one thing that knocks this film down ever so slightly against the original trilogy. When it comes to a character like Ash, no one is going to be able to fill Campbell’s shoes and the filmmakers knew that. Instead, Alvarez and company craft their own version of Evil Dead and tweak the horror/comedy into a serious, bleak, and gory affair. There are, arguably, better character relationships built in this film which call for a bigger emotional impact for deaths and transformations. 2013’s Evil Dead isn’t just a cash grab or carbon copy of its predecessors. It’s a unique experience that keeps the spirit of the original while being its own thing entirely. Because of that, Evil Dead is a complete film and one of the best horror reboots ever.