With the multitude of films that are released every year, sometimes one just falls through the cracks. Today, we’re reviewing Duke Johnson and Charlie Kaufman’s Anomalisa just in case you missed it…

Charlie Kaufman is a name that has flown under the radar for quite some time now. Chances are that you have at least heard of one of his films before. Kaufman has written the screenplays for films like Being John Malkovich, Eternal Sunshine of the Spotless Mind, and Adaptation. In 2015, he manned the director’s chair for only the second time in his career with Anomalisa.

Co-directed by Duke Johnson, Anomalisa was crowd-funded through Kickstarter after raising over $400,000. It’s an adaptation of a play written by Kaufman so, typically, it features all of the usual tropes of his work. It’s quirky, awkward, touching, and vulgar. The biggest difference between this film and others that Kaufman has worked on is in the aesthetics. It’s made entirely with puppets using stop motion animation.

The film is about a man, named Michael Stone (David Thewlis), who spends the night in a Cincinnati hotel. Michael is starved for companionship despite having a wife and child back home. After trying to reconnect with an old flame who rejects him, Michael meets Lisa (Jennifer Jason Leigh). He is immediately smitten with her after noticing a difference in her voice from everyone else’s. They end up hitting it off and quickly fall in love. Following the consummation of their relationship, Michael must mentally deal with his actions and his newfound feelings. 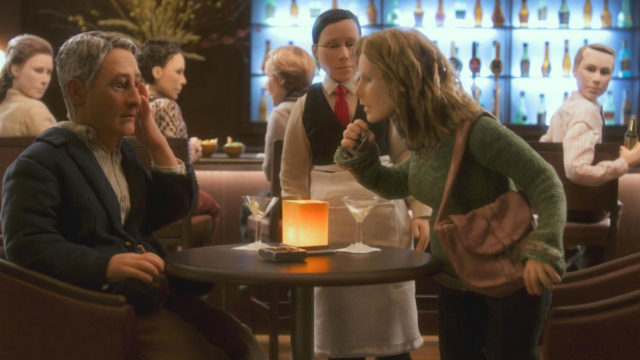 One thing to note about Anomalisa is that there are only three voice actors in the entire film. Thewlis and Leigh voice the two main characters while Tom Noonan handles the rest in the same soft, monotone voice. Obviously, Kaufman and Johnson play on the idea that there’s one person for everyone. When Michael finally finds that person with a different voice, he believes it to be true love. However, as is often the case in real life, after the romantic chase is over, true feelings set in and people start to pick out annoyances of a significant other.

Anomalisa is an interesting film in that it’s easy to recognize the puppet characters as real people. The facial features of the puppets are perhaps better than anything seen before in animation. Unlike something like Team America: World Police, which brings a lot of humor from the usage of puppets, Anomalisa functions as a normal drama. It just happens to have puppets instead of real actors. Even their eyes seem to have life in them which makes it easy to forget the absence of human beings. Despite the fact that every character but Michael and Lisa have the same voice and face, they do have distinguishing clothing, hairstyles, etc. Their conversations are about things that real people talk about yet the mundane tone of their voices tend to block them out for Michael. 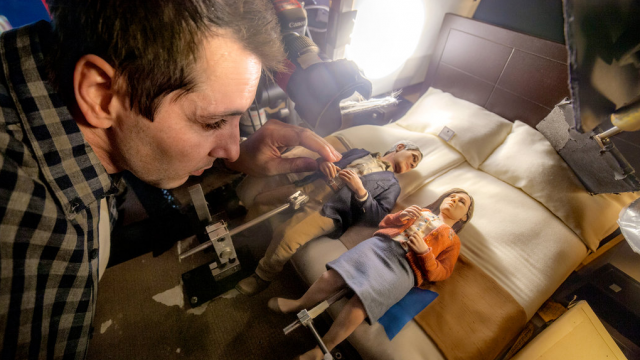 Another thing that sets Anomalisa apart from other stop motion films is the set design. The interior of the hotel is astonishingly beautiful and looks as if it is a real, life size place. A lot of times with stop motion, you can tell that the filmmakers obviously use small sets. That is not the case here. The attention to detail is ridiculous. The warmth and comfort of the hotel is inviting and truly fits the tone and subject matter of the film. It’s clear that the crew working on Anomalisa labored tirelessly on the details of the characters and sets down to the most minuscule.

Going into this film, understand that it is for adults. In fact, Anomalisa was the first R-rated nominee for the Academy Award for Best Animated Feature. There are some graphic encounters, even for puppets, in the movie that are certainly not for children. Other than that, Anomalisa is really in the vein of films like Lost in Translation and Her. It’s a realistic account of human nature and instinct. The methods may not be typical for this type of drama but it easily fits in with other poignant relationship driven films. As with all of Charlie Kaufman’s work, Anomalisa will move you, it will weird you out, but, most importantly, it will stick with you long after you see it.