Since the inception of the Marvel Cinematic Universe, there have been some hiccups, missteps, and iffy entries over the past 10+ years. Films like The Incredible Hulk, Iron Man 2, and Thor: The Dark World have come under fire upon their releases and have been argued about in terms of their overall quality. Though, everyone has their own opinion as to which films are weak links in the MCU. In the case of this reviewer, films like Thor, Captain America: The Winter Soldier, and Ant-Man and the Wasp make up the lower tier. That being said, nothing comes close to the uber-confident and horribly bland new installment to the MCU, Captain Marvel.

That’s right. Captain Marvel is the undisputed queen when it comes to the underbelly of Marvel. Before we rip into the film itself, let’s cover some background. The Captain Marvel name is a point of contention as DC Comics also features a hero that goes by the same moniker but is also known as Shazam. Coincidentally (or maybe not), DC is set to release their own film, Shazam!, on April 5th. What’s even stranger is that actor Djimon Hounsou is in both films. Anyway, several characters have taken on the moniker of Marvel’s hero with the film version focusing on Carol Danvers. Labeled as Marvel’s biggest female hero and the mightiest Avenger, Danvers made the most sense to make the jump to the big screen. Though, the film does incorporate some aspects of other characters who’ve also donned the title.

Captain Marvel kicks off right in the thick of things as Starforce member Vers (Brie Larson) has recurring nightmares of an older woman she can’t remember. Her mentor, Yon-Rogg (Jude Law), tries to hone her training on maintaining control of her emotions. Along with other Starforce members, the two set out on a mission to rescue an undercover Kree operative from a group of alien shapeshifters known as Skrulls. Vers is captured by Talos (Ben Mendelsohn), the Skrull commander, but quickly escapes after the Skrulls attempt to extract her memories. She crash lands an escape pod in 1995 Los Angeles and soon meets a young Nick Fury (Samuel L. Jackson) and Agent Phil Coulson (Clark Gregg). Vers begins to remember a life she had on Earth and discovers that her name is Carol Danvers while striking up an unlikely friendship with Fury. As Carol remembers more of her past, her and Fury continue to avoid the Skrulls while trying to figure out what they want.

Frankly, none of the plot really matters in Captain Marvel. The film does whatever it wants, whenever it wants. For viewers who are unfamiliar with the character in general, you can expect to have many questions while receiving few answers. You don’t even know what the film is actually supposed to be about until at least halfway through. In cinema, it’s standard that the film’s premise is introduced between the 17 and 30 minute mark. That’s not the case here. Again, Captain Marvel is going to play by its own rules and there’s nothing you can do about it. You don’t need to know what the characters are doing, what they’re looking for, or their reasoning behind it. The best thing viewers can do is sit with their eyes open and mouths shut while Marvel shows you what it wants. 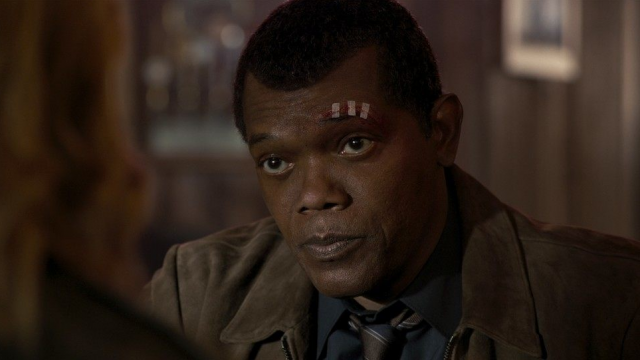 Captain Marvel is one of the most smug movies ever made. It blasts you with waves of 1990’s nostalgia as subtly as a baseball bat to the back of the head. It’s amused by all of its quips and “in jokes” and is simply in love with itself for its entire two hour runtime. If you couldn’t tell from the messy plot outline above, the story is one of the film’s lowest points. That’s no surprise as the married directing duo of Anna Boden and Ryan Fleck are credited with both the screenplay and the story. Though, they share screenwriting credit with Geneva Robertson-Dworet and story credit with Nicole Perlman, Meg LeFauve, and Robertson-Dworet. There are just too many cooks in the kitchen to make this anything resembling a concise story and it sure as hell shouldn’t be as pleased with itself as it is.

A big part of this has to do with the main character. Brie Larson is a very capable actress but she’s either horribly miscast or misused in Captain Marvel. Her fish-out-of-water character isn’t something new to cinema but it’s as if the film forgets this idea immediately. She’s rarely confused or unsure of what things are despite having no memory of Earth. Obviously, this makes absolutely no sense and leads to a mostly wooden performance. She shows a tiny bit of charisma early in the film with her wit but the schtick runs its course very quickly. Once it devolves to back and forth banter between Larson and Samuel L. Jackson is about the time you start checking your watch and hoping the film’s almost over.

Of course, Jackson is a legend and always a welcome sight. Again though, the shoddy script rears its ugly head and just can’t get out of its own way. Ever. One bright spot proves to be Ben Mendelsohn as Talos who, surprisingly, has depth. His character is misunderstood and the Skrulls in general have an interesting story that viewers don’t get to fully experience. Yet, even Mendelsohn’s Talos doesn’t escape without a little criticism. Similarly to Larson’s Carol, there’s a part in the film where Talos doesn’t know what a cat is but, somehow, knows what a file cabinet is. It’s a small detail but it’s also a little infuriating in the context of the film. By far, the best character in the film is an orange cat named Goose. He’s awesome. Now, we’d be remiss to say that there’s nothing good about the film. Obviously, this is a Marvel film which means it’s technically well made. There are some good makeup effects and some decent CGI in some spots. However, the film is also very dark and murky in many places. A lot of the action that takes place is difficult to see and often resorts to the choppy editing used by the Russo brothers in their early Marvel films. The de-aging technique used on Samuel L. Jackson is done pretty well and convincingly makes a 70 year old Jackson look pretty youthful. The same can’t be said for Clark Gregg’s Agent Coulson who sort of looks like he belongs in the video for “Wynona’s Big Brown Beaver” by the band Primus.

Speaking of bands, Captain Marvel is chocked full of, you guessed it, popular songs from the 1990’s. A ton of groups are represented such as Nirvana, Garbage, TLC, No Doubt, and others. Even bands that didn’t get a song on the soundtrack are shoehorned in in various ways. Brie Larson wears various t-shirts from bands like Nine Inch Nails, Heart, and Guns N’ Roses. Posters for others like Smashing Pumpkins pop up here and there as well. This is something that Marvel got into its system due to the massively positive reaction to Guardians of the Galaxy‘s Awesome Mix Vol. 1 and 2 soundtracks. Just because Guardians did it doesn’t mean that every Marvel film should do this though either. Whereas the Awesome Mixes have meaning in Guardians, it cheapens the overall effect if it becomes just a formality for every Marvel film. This is especially true when the film’s original score, composed by Pinar Toprak, is quite memorable in its own right despite its limited time to shine.

For the sake of this review, Captain Marvel is escaping with a 1.5 and that’s being generous. It’s not nearly as bad of a film as Glass was but everything about it is much more infuriating. Imagine sitting in a theater watching the blandest movie you can think of and then having the person next to you nudging you and winking every few minutes at its cleverness. That’s what it’s like to watch this film. It tries so hard to be colorful, fun, and joyful that it results in being completely devoid of all of those things. The story is horribly told, Brie Larson is the worst Marvel superhero in the MCU, and the film doesn’t make you nostalgic for the 90’s. It makes you despise the decade even more.

Even though I don’t often explicitly state my personal feelings about films on this site, I firmly stand by this opinion: I hate Captain Marvel. I hate everything that it tries to be and everything that it ends up being. The film is at its best when it just delivers a superhero doing superhero things but even those moments pale in comparison to any of the actual good superhero films of the past twenty years. Whether you enjoyed it for what it was or shared a hatred for it, it’s highly unlikely that anyone will love Captain Marvel. It’s easily the worst film in the Marvel Cinematic Universe and it’s not even close.