After years of anticipation, it’s finally here. On Thursday night, Star Wars: The Last Jedi, the eighth installment of the episodic saga, saw its early premiere release in theaters. The film will pretty much act as a money printing machine for the entirety of its theatrical run. The most important question to ask, though, is if The Last Jedi is any good. Well, that’s where things get complicated.

There’s no secret that expectations were soaring for this film following the return to form that was The Force Awakens. Opinions were polarizing but you can’t argue that it was a much needed step in the right direction after the horribly misguided prequel trilogy from George Lucas. The Force Awakens brought back beloved Star Wars characters like Han Solo, Chewbacca, and Princess Leia. It even introduced some suitable new ones to build a story behind in Rey and Finn. With The Last Jedi, writer/director Rian Johnson develops the feel of a deeper galaxy but often ends up leaving more questions than answers with some strange story arcs, uneven pacing, and unexplained events.

Star Wars: The Last Jedi picks up where The Force Awakens left off. The First Order, led by Kylo Ren (Adam Driver) discovers and attacks the base of General Leia Organa’s (Carrie Fisher) Resistance fighters. After Leia is left incapacitated, Poe Dameron (Oscar Isaac), Finn (John Boyega), BB-8, and mechanic Rose Tico (Kelly Marie Tran) devise a secret plan to disable the light speed tracking device that The First Order uses to discover their whereabouts. Meanwhile, on Ahch-To, Rey (Daisy Ridley) attempts to get Luke Skywalker (Mark Hamill) to teach her the ways of the Force. Given his past failure of Ben Solo, who becomes Kylo Ren, Luke is reluctant and intends to teach her why the Jedi should end.

Unfortunately, we can’t say too much more about the plot of the film as this is spoiler-free. Though, much of it isn’t too far off from the plot of The Empire Strikes Back. Luke’s hesitance about training Rey is similar to that of Yoda training Luke. There’s also a flirtation with the dark side of the Force. Supreme Leader Snoke (Andy Serkis) is finally shown in the flesh in a very Emperor-like role to Kylo Ren’s Darth Vader. The film is different enough from Empire but it definitely revisits many of the same ideas. 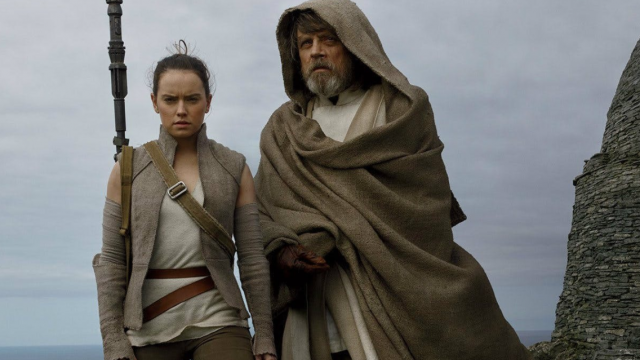 That being said, The Empire Strikes Back it is not. Where Empire had a solid flow and the benefit of introducing even more iconic characters, The Last Jedi fails in this regard. Seeing Luke Skywalker train Rey should’ve been the best part of the film but it ends up being just kind of weird overall. The sequences are extensive and drawn out and it never seems like the two are accomplishing anything. There’s a metaphorical (and literal) dark place below the island that Rey is drawn to for some reason that the film never fully explores. Kylo Ren once again shows conflict within himself that should’ve been weeded out when he murdered his father, Han Solo (Harrison Ford), in the previous film. Here, though, you just get more of the same that you did in The Force Awakens.

As for the characters, there are a handful of new ones in The Last Jedi with Rose, DJ (Benicio del Toro), and, for some reason, porgs, being featured the most. Rose is likable enough but she seems like such a throwaway character that it’s surprising she gets so much screentime. Del Toro as DJ is actually really good but, unlike Rose, the filmmakers don’t focus as much on him. As for the bird/mogwai-esque porgs on Ahch-To, they’re used way too much. They elicit a few cheap laughs, especially when Chewbacca (Joonas Suotamo) intends to eat one, but they overstay their welcome. In addition, characters from the previous film like Captain Phasma (Gwendoline Christie) and Snoke unfortunately don’t receive their just do here.

That being said, Luke Skywalker and Rey are at their best in The Last Jedi. For every strange moment they share (i.e. Luke drinking this green milk from some creature’s utter), there are some true Star Wars moments. There’s a nice sequence where Rey trains with a lightsaber as Luke watches from afar. It’s such a simple scene but it works to get you excited for what’s to come. Like Harrison Ford’s Han Solo in the previous film, The Last Jedi does its best to give Mark Hamill appropriate time to shine. This is probably Hamill’s most complex performance of the character in general. Luke has his own inner conflict and fear of failure that he battles. When he finally does emerge as the character we know and love, it’s definitely worth the wait. 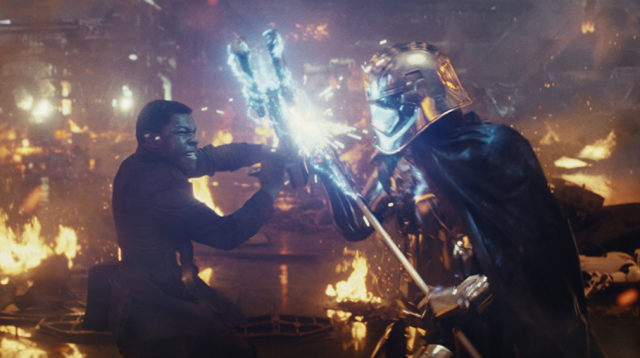 There’s really no single biggest problem with Star Wars: The Last Jedi. All of the small issues add up to make for a less than stellar overall product. For a film that toils with darker elements than its predecessor, it certainly shoehorns some dopey comedy in quite often. Sometimes it works and, many times, it doesn’t. There’s also some unappealing CGI. Unlike The Force Awakens, The Last Jedi dangerously toes the line of prequel trilogy CGI. It never quite looks that bad but some of the new creatures get a little too close for comfort. In addition, there are some moments that just aren’t fully explained. Again, this is spoiler-free so we can’t go into detail but there are some serious questions about the Force.

When all’s said and done, Star Wars: The Last Jedi is decent. Rian Johnson toys with some interesting ideas that never get fully realized in most cases. It’s also depressing that the film mostly deprives of the Rey/Finn relationship. Their dynamic drove much of The Force Awakens and it’s sorely missed here. Of course, though, the film isn’t all bad. There are some really great fight scenes, mostly drenched stylistically in the color red. While the first half drags a little, the second half of the film gets back to being what Star Wars is all about. For those hoping to see the second coming of The Empire Strikes Back, you may be slightly disappointed. However, Star Wars: The Last Jedi is a solid effort once it gets going. It just takes a little bit to get there.