Over the course of this year, we’ve checked out a number of independent found footage horror films. It seems that most found footage films being pumped out of Hollywood (i.e. the Paranormal Activity series, Blair Witch, and countless other demonic possession movies with the word “Devil” in the title) are mostly uninspired bore-fests. On the indie scene, though, it’s truly shocking what some of these filmmakers have been able to do with such a restrictive style of film. Once again, we got another welcome surprise with Kévin Mendiboure’s, The Follower.

The film is written by Vincent Darkman from an original idea from Mendiboure. Since 2016, Mendiboure has written and directed a number of short films, including The Photographer, with The Follower being his only feature to date. Distributed by Terror Films, it was made available on video-on-demand platforms such as iTunes, Vimeo, Google Play, and Amazon Prime on October 31st.

The film follows David Baker (Nicolas Shake), an enthusiastic vlogger who hosts an online show called Creepy Passion. His subject is Carol (Chloé Dumas), a young woman who claims to be living in a haunted house. David plans to stay at Carol’s house and document all the strange occurrences happening there. Upon arriving, Carol asks David not to disturb her grandmother’s bedroom. As his stay gets weirder and weirder, David is unsure if Carol is simply crazy or if there’s something more in the house. 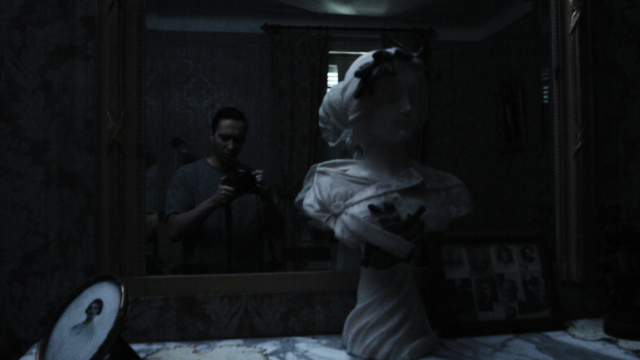 The first half of The Follower is done quite well. Instead of a standard plot containing a group of friends filming a documentary or something of that ilk, David hosting his own show adds some intrigue. Early on, he’s not overly serious or dramatic about the supposed paranormal events in Carol’s house. It’s more of a performance that he puts on to attract an audience. In addition, the whole film isn’t just shot through the lens of a handheld camera. Other footage from various stationary cameras that David sets up throughout the house is spliced in. This greatly helps separate The Follower from most other films in the found footage sub-genre. It’s also nice to see cameras strategically placed in the shots to avoid potential continuity errors. That’s a big kudos to the filmmaker here.

There are also some decent chills to go around in The Follower. While most aren’t anything that haven’t been seen before, they’re done effectively. Simple moments like Carol creepily climbing on top of David or a neat shadow effect go a long way in building suspense. Even well timed effects like a lightbulb inexplicably shattering or a chair moving work well in the film. Mendiboure doesn’t resort to using cheap jump scares and everything looks quite good. This isn’t necessarily a surprise seeing that the locations, camera work, and cinematography of the film are all impressive as well. Simply put, this is a great looking film especially considering its indie budget.

When it comes to the acting, it’s a bit hit or miss. As previously stated, Nicolas Shake’s David is animated and cheerful which is a welcome approach. As the film continues, though, he does develop a more serious side and Shake’s acting gets a bit melodramatic. Instead of the likable web host he originally portrays, his later performance seems more scripted and he tells the audience his problems rather than showing them. On the other hand, Chloé Dumas puts in a solid performance as Carol. At any moment, she can be timid and vulnerable before doing a complete turn into eerie and downright frightening. Sure, her acting can be a bit uneven at times but that’s a byproduct of the role itself. Ultimately, she does a convincing job overall. 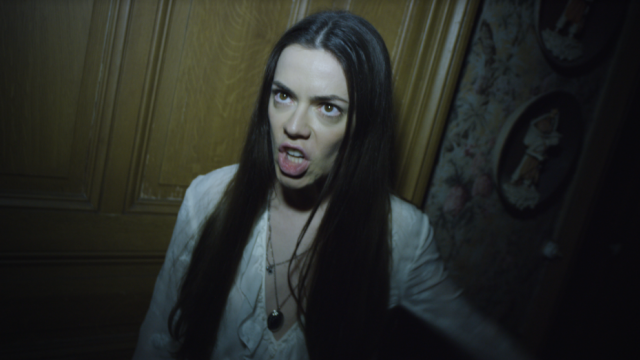 The biggest issue with The Follower is its complete shift in tone, storyline, and execution in its second half. David finally gets fed up and leaves Carol’s house to which the story jumps four weeks ahead. David has problems sleeping and experiences his own occurrences at his home. Again, Shake’s acting becomes a little melodramatic at this point and he’s somewhat unlikable in general. This half also seems to resort towards the standard found footage film with someone continuously filming themselves for uninteresting reasons. What made the story interesting during its first half was the character of Carol. You’re unsure as to whether she’s a possible source for the horrors within her house or if she’s simply a victim.

While there are definitely some things to like about The Follower, it’s a little underwhelming overall. The first half is pretty solid and provides some satisfying scenes. Though, the second half is where it falls apart. In addition, the ending, which we won’t give away obviously, will leave you scratching your head a little. This almost felt like two different stories being put together into one movie. That being said, Mendiboure shows off his talent with a great looking film. It’ll be interesting to see what he does next as he clearly understands the genre and has a keen eye for detail. Even though The Follower may ultimately fall flat story-wise, it’s a technically sound experience with a lot to build off of for a young filmmaker.