A few weeks back, we discussed how it’s difficult to find something unique in modern horror in the opening of our review for Jason Axinn’s animated horror film, To Your Last Death. Well, we could basically cut and paste the opening paragraph from that review in this one because we find ourselves in another interesting situation with the new film from Eric Power, Attack of the Demons. After all, who would’ve thought that we’d be talking about one wonderfully animated horror film, let alone two, this Halloween season.

The film opens in Barrington, Colorado, with a mysterious man reciting a ritualistic chant that causes an outbreak of demons. Three loners, Kevin (Thomas Petersen), Jeff (Andreas Petersen), and Natalie (Katie Maguire), run into each other prior to the town’s Halloween festival before separating to indulge in their favorite respective pastimes.  Once the demons begin their attack, the three reconvene to ward off the evil creatures and find a way to stop them for good.

The plot of Attack of the Demons is pretty standard horror stuff but it works for a film of this nature. The film is a mixture of a lot of different things as it’s kind of like older South Park episodes like the show’s first Halloween special, “Pinkeye” mixed with town festival episodes like “Cow Days.” The fun really starts when the demons begin their attack on the town and “spreading” by puking up some kind of bodily fluid onto their victims which then turns them into demons. This brings to mind gory splatstick/body horror films like The Evil Dead, The Thing, and Re-Animator. Basically, if you like South Park and these types of bizarre gore-fest horror films, Attack of the Demons is a film for you. 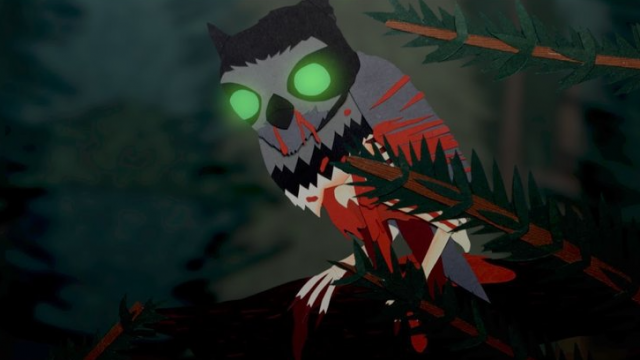 While the animation style is very clearly influenced by the long running Comedy Central show, animator/director Eric Power goes a bit further with it. The artwork is leaps and bounds over Trey Parker and Matt Stone’s work on South Park and there’s always a ton to look at in every frame. Whether it’s flesh melting off of a character’s face, an impressive assortment of arcade cabinets complete with names and artwork, or even a very distinct and recognizable blank Kodak VHS tape sitting in a bedroom, Power’s attention to detail is impeccable and does a great job actually making it feel like mid 90’s Colorado. In addition, Adult Swim’s Metalocalypse comes to mind due to the excessive, detailed, and amusing gore. Though, it’s quite tame in comparison given the primitive animation style, Power finds a way to make the violence have weight here and it provides many of the film’s best scenes. The awesome synth score from John Dixon also deserves praise as it fits with the art style and adds to the overall aura of the film.

Despite many of the comparisons we’ve made, Attack of the Demons isn’t an exact copy of any of the previously mentioned films or shows either. It has a different kind of appeal to it that definitely won’t appease everyone. The film’s not a straight up comedy like South Park even though it’ll sometimes make you laugh. It certainly leans more towards the horror side of things but there’s also a sense of indifference to it as well. The characters of Kevin, Jeff, and Natalie have an art snob ideal to them as underground film, video game, and music buffs respectively. Throughout the entire film, their nonchalance about the predicament they find themselves in is much different than other horror films in which characters are in a fight for survival. While Kevin, Jeff, and Natalie certainly don’t want to die, they’re almost at peace with how things play out. In a way, it’s a critique on the world in 2020 where everyone’s so tired of everything going on that the “whatever happens, happens” mindset has taken hold. 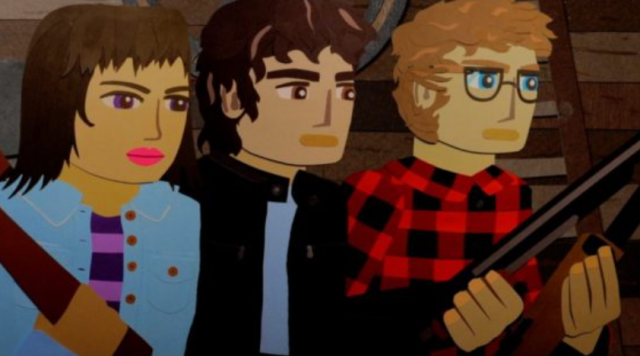 Even though Attack of the Demons has a lot of appeal and is often highly entertaining, it’s also a bit too long and even a little boring at times. At only 75 minutes in length, it’s surprising that the film drags at all. Yet, there’s too much downtime with humorous, but also very dry, character banter and a lot of slow moving scenes. While a film doesn’t have to have nonstop action to be entertaining, there’s just not a lot to latch onto outside of the gore scenes and art style. The characters have interesting traits/personalities that many people can relate to, but they ultimately don’t mean much to the overall story. Because of this, you often find yourself waiting for the next spectacle instead of getting absorbed in this world and story.

Though all of the pieces are here for a potential cult classic animated horror experience, Attack of the Demons falls just short. However, it’s still a film that horror fans are going to want to check out and gauge for themselves. It’s a quick watch even with its slower moments and the film is truly a work of art both visually and aurally. The insane amount of detail in every frame alone is worth heaps of praise. The only thing slightly holding the film back is in its storytelling and characters. While these slow moving/indifferent choices feel intentional, you can’t help but think of what the film could be if there was a little more substance here. Regardless, Attack of the Demons is a true animated horror spectacle that every genre fan should see for themselves. Eric Power’s mastery of the visual style and John Dixon’s soundtrack alone are worth 75 minutes of your time.

*Attack of the Demons is currently playing in limited virtual cinemas. The film is set for a video-on-demand release on November 3rd. Check out the trailer below.*