Classic monsters never seem to go out of style in the horror genre. Yes, it’s true that they come and go from time to time but there’s always an eventual resurrection or offshoot to breathe new life into certain characters. One of the most obvious examples of this is the vampire. From films like Nosferatu and Dracula to, sadly, Underworld and Twilight, vampires always seem to have a place in cinema. The same can be said for werewolves. Sometimes going hand in hand, the werewolf has had a similar longevity since their first appearance in 1913’s The Werewolf. From there, films like 1941’s The Wolf Man, the duo of 1981’s An American Werewolf in London and The Howling, and, sadly again, Underworld and Twilight, have kept werewolves alive in the horror/action/emo teen genres. Here in 2020 though, writer/director Jim Cummings crafts one of the most fun and thrilling werewolf tales in recent memory with his new film, The Wolf of Snow Hollow.

The film opens with the brutal murder of a young woman whose literally left in pieces during a full moon. Police Deputy John Marshall (Cummings) arrives on the scene but can provide no answers as to what happened in his small town of Snow Hollow. Similarly violent attacks occur, each during a full moon, leading some of John’s police force to insist the attacks are being carried out by a werewolf. John, however, reiterates to them time and again that their perpetrator is a man. As the attacks continue, John not only has to deal with a town on edge but also care for his ailing father, Sheriff Hadley, played by the late Robert Forster in one of his final roles, save face with the other officers like Julia Robson (Riki Lindhome), and find a way to connect with his insubordinate daughter, Jenna (Chloe East).

In the past, films like Abbott & Costello Meet Frankenstein have put an obvious comedic spin on classic monsters like Frankenstein’s monster, Dracula, and, of course, the Wolf Man. Then, there’s something like An American Werewolf in London that has more subtle humor while also bringing some of the more terrifying elements one would expect. Of course, you can’t forget about Monster Squad in here either. The Wolf of Snow Hollow falls somewhere in between these. It’s more laugh out loud funny than An American Werewolf in London but it’s also more serious than an Abbott & Costello/monster mashup. The humor lies more in character interaction and how John poorly chooses to deal with the problems around him. There’s a good mix of horror and comedy where the film feels like it’s trying to be legitimately creepy while offering up a level of fun to also amuse its audience. 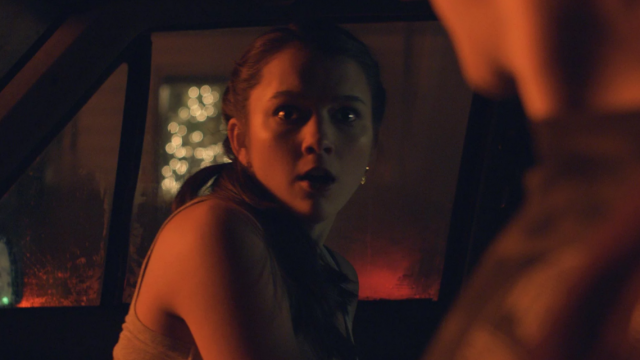 One of the best things about The Wolf of Snow Hollow is its creature and gore effects. Like any good monster film, the monster is used sparingly but effectively. Such is the case in a film like Alien, the werewolf is mostly seen shrouded in darkness or from a distance as it stalks its victims. While some of this is probably due to budgeting constraints, it’s an effective method at keeping the film’s villainous creature scary and unpredictable. It can literally strike from anywhere with only its size and brutality as its defining characteristics among the characters that live to tell of their encounter with it. There’s a little bit of gore in the film as well but it’s done tastefully. There are rarely closeups of mangled bodies or anything like that. It’s more about how little you see in The Wolf of Snow Hollow that makes it so efficient in telling a bloody and violent werewolf tale.

Once again, most of the laughs come from the characters interacting with one another. Characters like Cummings’ John Marshall and Lindhome’s Julia aren’t necessarily buffoons but they’re certainly in over their heads when it comes to dealing with a potential werewolf. Robert Forster’s Sheriff Hadley adds another wrinkle to the story as John’s seriously ill father who’s trying to keep hold of his police force but is clearly limited in what he’s able to do. The dialogue between father and son, along with that of John and his own daughter, Chloe East’s Jenna, provide some touching moments but also is a source of frustration for John. He’s no better at keeping his family members happy than he is at leading a ragtag group of police officers, staying sober, or catching a werewolf. Overall, John is such an unlikable character but there’s also something redeeming about him as well. Cummings’ performance is loud, obnoxious, and loathsome at time but this definitely feels intentional. His main way of dealing with things is yelling, which can get a bit old after a while, but his rash decisions and aggressiveness do make for some humorous physical comedy. 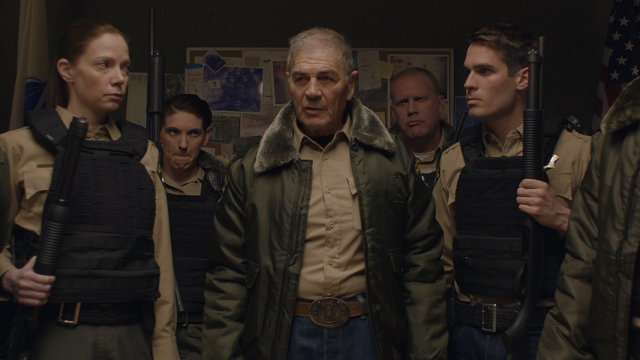 However, with all of its comedy and goofy characters, The Wolf of Snow Hollow too often feels like it’s trying to be a Coen brothers film. With its witty banter and snowy small town backdrop, the film definitely seems like it draws inspiration from the Coens’ 1996 film, Fargo. Another title that comes to mind is Jim Jarmuch’s The Dead Don’t Die. Stylistically, both Jarmusch’s film and The Wolf of Snow Hollow are very similar. Though, Cummings puts quite a bit more stock into horror than Jarmusch. The other minor issue with the film is its ending. While it’s not bad, there’s not enough that happens in the rest of the story that leads up to the conclusion. It kind of comes out of nowhere and will have most viewers scratching their heads about how they got to that point. Obviously, we’re not going to spoil anything here but what begins as a mostly original story about a bloodthirsty werewolf kind of loses its way by the ending leading to a confounding final showdown.

Even though The Wolf of Snow Hollow isn’t entirely original, there’s still a uniqueness to it. It could be from the fact that no one has really done a werewolf movie quite like this one in a long time. While it definitely takes influence and/or is reminiscent of some of the aforementioned films like An American Werewolf in London, Fargo, and The Dead Don’t Die, it doesn’t feel like a carbon copy of anything either. The film will make you laugh, gasp, and shake your head at times but it’s always entertaining. It knows what it is and doesn’t disappoint in relaying its fun and clever story. No, The Wolf of Snow Hollow isn’t the be all, end all of werewolf films or even the best classic monster/comedy mashup. Instead, it’s stylistic, playful, and, most of all, one of the most fun movie experiences you can currently have.

*The Wolf of Snow Hollow is currently available for rent or purchase on video-on-demand platforms like Amazon, Google Play, Vudu, and YouTube. Check out the trailer below.*