There may not be another scenario that’s so realistically terrifying and anxiety ridden than a home invasion. These types of thrillers can be impressive and shocking while building up a viewer’s sense of dread because, let’s face it, no one wants a stranger in their house. Films like Funny Games, Panic Room, and The Purge suggesting that you can’t even be safe in your own home is a frightening proposition that makes for some intriguing scenarios on film. In this vein, Walker Whited’s debut feature, By Night’s End, is a home invasion thriller that’s sometimes maddening but often satisfying as a couple fights for their lives against outside forces.

Written by Whited from a story by Sean McCane, the film centers on Mark (Kurt Yue) and Heather Barnes (Michelle Rose), a married couple who’ve recently moved into a new home after suffering through a tragedy. The two have financial issues and are unsure of what their future currently holds for them. One night, an intruder named Parker (Carlos Aviles) breaks into their home to look for something he’s hidden there but Heather ends up shooting him in self defense. Mark then convinces Heather to hold off on calling the police so the two can search their new house to find whatever it was of value that Parker was looking for. However, there’s a man with a curious hat named Moody (Michael Aaron Milligan) lurking around outside intent on collecting “what’s owed to him.” From here, it becomes a race between the Barnes’ and Moody and his men to find what Parker stashed in the house.

The premise of the film itself is relatively standard crime/thriller fare while still engaging viewers. Though, there’s a massive issue with By Night’s End and it’s with the film’s logic. The problem is that there often isn’t any. Heather shoots Parker in self defense but then her and Mark choose not to call the police so that they can scour the house. Why wouldn’t they just call the police and then search the house after the situation with Parker is taken care of? They own the house so they have all the time in the world to search it. This would also prove to be the smart route to take as the police could handle the situation with Moody if he chooses to show himself as well. There’s another part early in the film where a neighbor investigates the gunshot that kills Parker but, apparently, no one’s concerned about the slew of henchmen surrounding the house later on. These moments are so irritating and really upset the overall flow of the film. 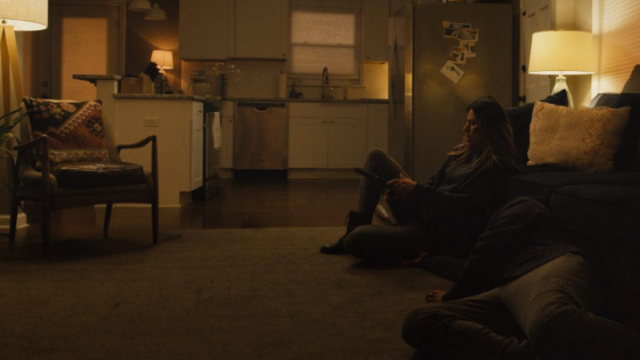 That being said, By Night’s End does do some things rather well. For his feature film debut, Walker Whited has slick production, camerawork, and an atmospheric soundtrack from Tyler Kitchens. The cinematography from Philip Wages is excellent and features some striking uses of color whether it’s the muted earthy tones in the house or the bright glow of police lights through the windows. Whited also establishes a desperate and dangerous tone to the film. There are a number of legitimate thrills and jumpy moments as Moody and his gang stalk the couple inside their home. There are some moments where the film is a bit misguided but, for the most part, there’s always a lot of tension mixed with some good action to keep the audience’s attention.

The characters in By Night’s End can sometimes be a mixed bag but, more often than not, they’re quite good. Kurt Yue and Michelle Rose do a great job as the two leads, Mark and Heather. They’re a mentally broken couple torn apart by financial hardship, Heather’s time in the military, and, most of all, their daughter’s unexpected death. While Heather was away, Mark had to hold it together at home and there’s some clear resentment between the two. Yet, there are scenes that establish connections between the two as well. Ultimately, you can buy that these two are a battle tested couple. When approached by Moody, Mark is defiant but overpowered while Heather puts her military background to work for some John Wick-esque action scenes. Speaking of Moody, Michael Aaron Milligan proves to be an effective antagonist even though it feels as if the character may not be as smart as he thinks himself to be at times. Of course, this has more to do with the aforementioned logic than an otherwise solid performance from Milligan. 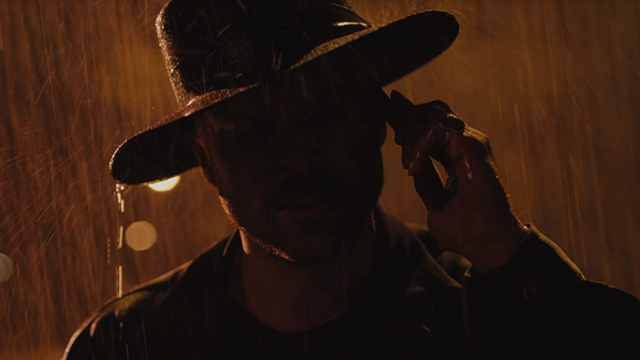 This brings us to another less glaring issue with By Night’s End and it’s that the film just tries to do too much a lot of the time. On one hand, we have a drama about a broken family needing to find strength. On the other, we have a suspenseful home invasion thriller in which we’re supposed to root for the characters to survive. Then, there are all the action scenes with Heather fighting back against her and Mark’s attackers. There are too many times when the film just can’t commit to what it wants to be so that viewers are left with a mishmash of ideas. In one scene, the action will be picking up as Heather hunts down henchmen and then, in the very next, the plot will slow to a crawl as Heather and Mark talk about their daughter who, frankly, is almost irrelevant to the actual plot. None of these things are done poorly, save for some of the film’s logic or lack thereof, but maybe a “less is more” approach could’ve tightened things up.

Even with its issues, though, By Night’s End remains a well made and engaging thriller. There are parts that will drive you nuts but also those that will have you on the edge of your seat. It’s not entirely uncommon for feature length debuts to suffer from a lack of direction since it’s not easy to make a feature length film. In a way, the film kind of feels like two shorts combined and padded out to make one feature. The positive is that the film is assembled from two pretty good shorts that will keep viewers invested from start to finish. While By Night’s End isn’t a perfect drama/action/crime/thriller, there’s a lot to like and Walker Whited’s talents as a filmmaker and storyteller are on full display.

*By Night’s End is currently available for rent or purchase on video-on-demand platforms like Amazon and Vudu. Check out the trailer below.*

One Thought to “Indie Film Review: By Night’s End”