Last year, we reviewed I Am a Rain Dog, a short film written by Kris Salvi and directed by Christopher Di Nunzio. Centering around Salvi’s Valentine Biltmore, the film was about someone who had become both physically and mentally lost while driving and needed help getting back on track. On this site, we praised the film for its existential questions and excellent performances but felt that the ending could’ve been a little more ambiguous. Now, Salvi and Di Nunzio return for another go-round in another fascinating piece of short filmmaking in the duo’s new effort, Exeter at Midnight.

The film focuses on Anthony (David Graziano), a retired mob hitman. Due to the things he’s done and seen over the course of his career, Anthony’s mental state has clearly deteriorated as the ghosts of the past continue to haunt him at his advanced age. Regardless, Vincent (Salvi), a mobster and made man, visits Anthony at his home and tasks him with killing his godson, Petey (Di Nunzio). Anthony is hesitant due to his age and inactive status but Vincent reminds him of his responsibilities because of the oath he took. From here, Anthony must face his own personal demons and decide where his allegiances truly lie.

The plot of the film isn’t entirely new as many mobster films center on loyalty, defiance, and dissension. Even though The Godfather III is quite polarizing, it gave us the legendary, “Just when I thought I was out, they pull me back in,” line from Al Pacino’s Michael Coreleone. This statement couldn’t be more apt when it comes to Exeter at Midnight. In his current state, Anthony knows that his time is up as the ghosts of his past continuously haunt him. With a failed relationship and wayward surrogate fatherhood at the forefront, Anthony knows that the only thing he’s ever been good at is destruction. This is something that Vincent apparently knows too as he tries to remain mild mannered throughout their conversation and knows how to get through to Anthony. While the plot may not be overly original, the execution (no pun intended) lands perfectly. 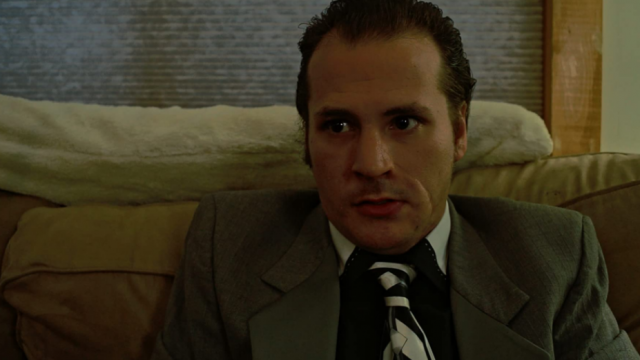 Perhaps unsurprisingly if you’ve read our I Am a Rain Dog review, the performances in Exeter at Midnight are really what make the film tick. David Graziano as Anthony certainly looks and acts like a man whose world left him behind long ago. He’s always on edge and expecting someone to come for him seemingly any day now. Though, he’s cool, calm, and collected the second he flirts with his past mob life. As a man, he’s broken but his trade is second nature. Kris Salvi is quickly becoming one of our favorites with his roles in I Am a Rain Dog, Gabrielle Rosson’s Salvation, and now this film. He also clearly has a love for and understands tales about the mob. As Vincent, he’s friendly enough with Anthony but it’s obvious that his visit is all business. It’s a power play to get Anthony to do his bidding even though he remains mostly respectful throughout. However, Vincent’s outbursts, no matter how brief, are some of the film’s best moments as he shows that he’s not someone to mess with. Audrey Noone also has a small role as the ghostly Maria reminding Anthony of his depressing past.

In our review of I Am a Rain Dog, our lone criticism was that the film could’ve been a little more ambiguous. It consistently blurred the lines of reality but resulted in pretty concrete fashion. Di Nunzio and Salvi went the opposite route with Exeter at Midnight. Nearly everything is left up to interpretation the audience is expected to fill in the backstories and motivations of the characters. This doesn’t always work in short films but it does wonders here given the talent onscreen and behind the camera. The script and storytelling gives enough insight to who these people are that you can see all sides of the story. The one outcome that viewers maybe can’t predict is the film’s ending. While it doesn’t always work with other titles, this film is right on the money with its conclusion. It leaves you wanting more of these characters and this story. From its ending point, Exeter at Midnight could really go anywhere and we wouldn’t say no to more of it if Di Nunzio and Salvi wanted to eventually revisit this world. 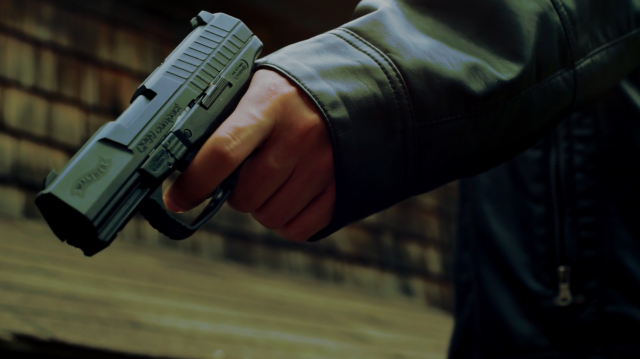 Like the duo’s previous work, the only negatives are mostly nitpicks. The ambiguity is a little double sided as it ends where it needs to end but it’s almost depressing to the viewer as you want just a tiny bit more. It may seem strange to praise it for this but also nitpick it but this is where viewer subjectivity comes into play. Does it hurt the overall film? No. It just makes you really wonder where everything could be leading. The other minor gripe is with Graziano. He’s very good in the film but during some of the more personal and emotional scenes, there’s maybe some discomfort there. It may just be the contrast from his stoic interactions with Vincent that throw off some of these scenes but there’s something just slightly off. Again though, Graziano is very good and isn’t a detriment to the film or its story.

With two excellent collaborations between director Christopher Di Nunzio and writer Kris Salvi, the filmmaking chemistry between them is evident. Di Nunzio’s direction and visual storytelling is a perfect complement to Salvi’s compelling stories. This is the fourth time we’ve reviewed a film with Salvi receiving a writing credit and all four have received a positive review. Something like Exeter at Midnight is a perfect example of the power of short filmmaking. When a brief 13 minute film can impact an audience more than some features, there’s something special about it. Di Nunzio and Salvi’s Exeter at Midnight is something special and hopefully we get more of this duo and maybe even this story in the future.