With a country so angry, tired, and, ultimately, divided, it’s been really hard to be optimistic about anything lately. It’s election day here in the United States and, while many people hope for a period of reconciliation and healing following the results, there’s a good chance that the unrest continues depending on who the next president will be. In addition, the COVID-19 pandemic has been hitting new heights in certain regions and continues to have people wondering when/if these nightmarish 2020 issues will end. Now, you may be wondering what any of this has to do with the subject of our review today. It just so happens that resistance of unopposed power mixed with the fear and uncertainty of a mysterious disease are two of the biggest plot points of Nicole Groton’s feature length narrative debut, Darkness in Tenement 45.

The film takes place in an alternate 1953 where the Cold War has turned into all-out biological warfare. While New York City was mostly evacuated, a group of survivors hunker down in an old, run down tenement building with very little supplies and no link to the outside world. Prior to the evacuation, sixteen-year-old Joanna (Nicole Tompkins) was taken in by her overbearing aunt, Martha (Casey Kramer), following a violent outburst that Martha dubs “the darkness.” As food and other supplies dwindle, Felix (David Labiosa), decides to venture outdoors to search for anything useful leaving Martha in charge. Joanna, along with Walter (Keyon Bowman), his sister, Rhonda (Emmy Greene), and the other children holed up in the building, quickly become at odds with Martha and the other adults. Joanna leads her companions in the fight against the adults while also having to battle the “darkness” and maintain some semblance of sanity.

While Darkness in Tenement 45 takes something of a horror/drama approach to its storytelling, there’s also a lot of science fiction and Orwellian ideals on display. Immediately, titles like George Orwell’s Animal Farm and Nineteen Eighty-Four come to mind when watching the film due to its lower class, or in this case, children, rising up to rebel against the their oppressors led by the all-seeing Aunt Martha. Sci-fi films like Equilibrium and the Hulu series, The Handmaid’s Tale, are also reminiscent with Joanna’s feeling of powerlessness and her eventual uprising. On the horror/drama side of things, Darkness in Tenement 45 feels a lot like Darren Aronofsky’s mother! with Joanna’s mental state frequently called into question while trying early to keep the peace. 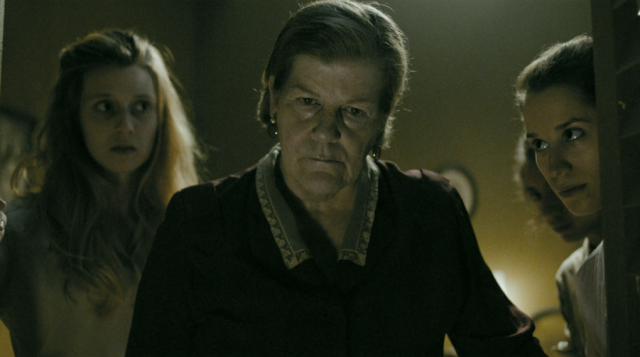 No matter the potential influences on the film, Darkness in Tenement 45 always feels like its own beast though. With the film completing production in August 2017, it’s amazing how relevant the story is at this exact moment in time. As we’ve already established, the film’s Orwellian plot may not be uncharted territory. Though, when it’s related to the countless examples of civil unrest throughout 2020, the relevance and foresight of Groton’s film seems all the more impressive. Of course, protests and riots over police accountability have broken out more than once in 2020. In the film, it’s the actions of Martha that cause the younger generation to band together to overthrow her reign of terror within the tenement. In addition, the reasoning for Martha’s domineering behavior is the possibility of a virus caused by the fallout of the war. She refuses to allow people in from outside and dictates how sick people will be handled. Like with the initial outbreak of COVID-19, there’s a fear of the virus from all of the characters as they quarantine and attempt to avoid all outside contact. Again, this is eerily similar to how things have been throughout 2020.

That being said, a coincidentally topical plot doesn’t go very far without the proper execution. Darkness in Tenement 45 is a brilliantly crafted film with excellent performances, an eerie setting, and some great technical work done by all involved. Nicole Tompkins is simply excellent as Joanna. She plays the role with an air of innocence that’s often plagued by a sordid past. As a viewer, you’re never quite sure what her story may be or what this supposed “darkness” is inside of her. She appears to be a normal girl, despite being often mistreated, but there’s a hint of maybe something more sinister below the surface. Casey Kramer’s Aunt Martha doesn’t help matters as she’s so insistent on Joanna’s mental issues. Obviously, it’s hard to believe her given the fact that Martha is the villain of the film but there does seem to be weight to her claims. Kramer’s performance is similar to that of Ann Dowd’s Aunt Lydia from the aforementioned TV show, The Handmaid’s Tale. Martha is unflinching in her attempts to maintain order. She believes what she’s doing is right but her cruel methods cause viewers to despise her. The rest of the cast deliver great performances as well with Keyon Bowman and Anthony Marciona being two of the main standouts as Walter and Horen respectively.

As strange as it may sound considering that the film takes place entirely in one building, Darkness in Tenement 45‘s setting is also a big highlight. Viewers really get a sense of the time period and world from just the look of the building. Old and rundown, you can tell that this tenement was not in the best neighborhood and every crack and hole in the wall serve as a potential entry point for the unseen virus. Nicole Groton and her team explore every nook and cranny of the building and really make it something of a character in the film. Working with a limited budget and space, Groton exhausts the location and makes viewers feel as if they’re in the tenement with the characters. When you add in the creepy score from Logan Rees and some surreally colorful Nicolas Winding Refn-esque dream sequences, it makes you really want to explore this world being established by Groton despite the fact that it all takes place in a single building. There’s definitely more than meets the eye here and you’ll always want to see more. 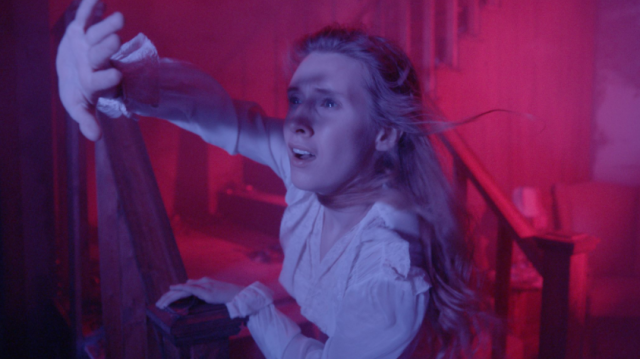 From start to finish, Darkness in Tenement 45 is chocked full of intrigue. While there’s never a dull moment in the entire film, there are still some very minor issues that may stick out for some viewers. There are moments of extremely effective offscreen violence throughout the film but the ending altercation leaves something to be desired. It just looks a little stagey. There also could’ve been more focus on Joanna’s “darkness.” So much of the film revolves around Joanna and her supposedly deteriorating mental health but it feels like it falls short of being a main plot point. However, these are both nitpicks as the film does work very well as is. These are just things that maybe could’ve been done a little better overall.

Darkness in Tenement 45 is what you want to see out of independent filmmaking. There’s a unique vision on display here and the story being told is relevant, timely, and, ultimately, satisfying. On top of everything, it’s just a very weird film but in the best way possible. Your eyes are constantly glued to the screen and there’s a genuine interest in how everything is going to shake out for this group of fleshed out characters. The film arrives at a time of such uncertainty and disrepair in real-life that it’s impossible not to relate it to what’s going on in the world right now. Darkness in Tenement 45 is an outstanding indie horror/drama that’s as compelling as it is pertinent. Its final moments leave a lasting impression that’ll stick with you long after the credits roll.

*Darkness in Tenement 45 is currently available for rent or purchase on video-on-demand platforms like Amazon, Google Play, Vudu, and YouTube. Check out the trailer below.*