In today’s world, it’s so easy to forget that not everything is about money. Sure, there are many struggling, especially now, but isolationism and consumerism have overtaken human interaction and experience. Frankly, everyone prioritizes buying things they don’t need instead of focusing on things that really matter. Money and material goods aren’t the only source for happiness. Writer/director Miranda July seems to understand this and dips her toe into the water here with a wholly unique approach in her new feature film, Kajillionaire. While not explicitly anti-consumerism, the film explores a more humanistic side of life with questions of family, intimacy, and understanding at the forefront.

Due to the ongoing dumpster fire that is 2020, Kajillionaire is a film that largely slipped through the cracks. It first premiered at Sundance Film Festival in January with a wide theatrical release planned for June. That release was postponed to later in the year with a September 18th release date and delayed again until the 25th. Of course, most probably missed the film’s theatrical release as movie theaters in some places have yet to open since their initial shut down back in March. The film then hit streaming services as part of the “theater-at-home” alternative in October with a final video-on-demand rent or purchase release a few days ago.

Kajillionaire follows the curiously named Old Dolio (Evan Rachel Wood) as she scrapes by in life with her grifter parents, Robert (Richard Jenkins) and Theresa Dyne (Debra Winger). The trio rely on petty theft and scamming to get by as they live on the absolute bare minimum. They get behind on their rent for the abandoned office space where they live, which is attached to a soap factory, and must come up with a way to make $1500. Old Dolio comes up with a scheme to collect travel insurance on lost luggage at the airport which the Dynes go through with. Here though, they meet Melanie (Gina Rodriguez), a personable young woman who Robert and Theresa take under their wing. They quickly show her the attention and appreciation that Old Dolio craves from them as the Dynes begin coming up with scams based around Melanie’s ideas. Melanie sees the lack of sentiment between the family and soon sympathizes with the emotionally detached Old Dolio.

We’re going to start things off by just saying that Miranda July crafts a very strange tale with Kajillionaire. It’s an offbeat, bizarre, and sometimes even dark comedy that, as you can imagine, isn’t for everyone. Even though the film has a lot of heart in some places, it focuses greatly on selfishness, manipulation, and a constant betrayal of trust. At times, its subject matter and ideas are very ugly as the Dynes exploit their gullible targets to fulfill their own needs. Yet, many of their cons are so miniscule in nature that they often don’t feel as vile as those trying to live like “kajillionaires” as Robert puts it. There are many times throughout the film where it’s hard to know what to feel about these characters and their endeavors but you’re always drawn to them regardless. 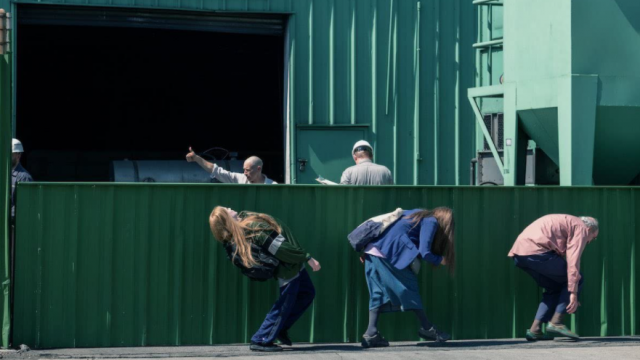 This is truly a credit to the amazing cast that July puts together in Kajillionaire. Evan Rachel Wood is the obvious standout but the supporting talent doesn’t slouch either. As the deep voiced and poorly postured Old Dolio, Wood gives a performance unlike any we’ve ever seen from her. Standoffish and simply strange, Old Dolio is an unlikely protagonist. Though, viewers soon realize how childlike and unaware the 26 year old character is and it’s easy to feel for her. For her entire life, she’s contributed equally to the family unit but has never really experienced true human emotion while frequently being overlooked by her parents. Wood has shown exceptional range over the course of her career, especially in something like the first season of HBO’s Westworld, and she continues to showcase her immense talent with the outlandish and often unrecognizable Old Dolio.

Richard Jenkins continues to be maybe one of the most underrated performers in all of Hollywood as he adds another quirky performance to his resume. While never the star, Jenkins is always electric onscreen and adds to everything he’s in. As the aloof but resourceful Robert, Jenkins is always a source of comedy as he tricks and lies his way through the film. Debra Winger’s Theresa is the perfect counterpart for Robert as well. The two have lived their con artist lifestyle for so long that they’re basically of one mind. Because of this, it’s her relationship, or perhaps lack of, with Old Dolio that kicks the film into another gear. We don’t want to get into spoiler territory so we’ll keep things vague here. Then, there’s Gina Rodriguez whose Melanie is clearly out of place in this group. In the case of Kajillionaire though, this isn’t a bad thing. Melanie is a stark contrast to everything about the Dynes. The way she dresses, looks, and communicates is completely foreign but, for whatever reason, the Dynes latch onto her. Rodriguez is great in the role but there are many times where you’ll question why she would ever link up with these people. That’s when the chemistry between Rodriguez and Wood really comes into play and takes the film to another level. 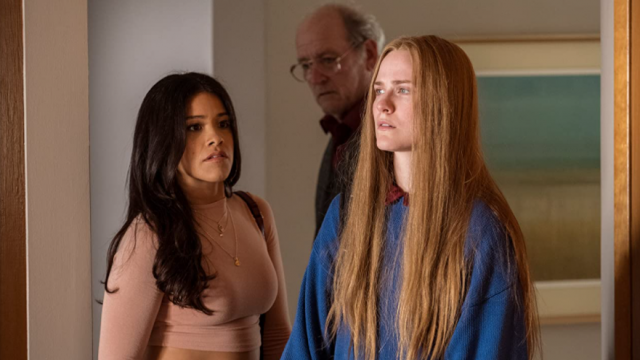 Again, we don’t want to give away too much about Kajillionaire but there’s definitely a split that occurs around the film’s midpoint. If anyone’s hoping for explanation or a complete history behind these characters, you won’t get it here. Basically, the film simply shows you each character’s true colors by its end. No more, no less. Some may find this unfulfilling as there are unresolved issues and almost a lack of comeuppance. Though, it doesn’t seem like any of these things are the true motivation behind Miranda July’s story. Instead, understanding, interaction, and an appreciation of life seem to be more at the forefront as opposed to concepts like right and wrong. There’s also definitely something to say about consumerism and living within one’s means. There’s almost a Fight Club sense as the Dynes steal needless items to return for cash payouts that they can live on. If everyone would spend a little less on things they don’t need, then maybe more people could discover an actual purpose in life.

As previously mentioned, Kajillionaire is a uniquely bizarre experience but a good one nonetheless. Fitting in with our recent review trope, the film is definitely not for everybody but it’s not completely inaccessible either. It feels like Miranda July has a lot to say with her film even if she’s not always forthcoming with the message. Evan Rachel Wood’s Old Dolio is the emotionless and loveless face of a generation fueled by materialism and human disconnect. Sometimes you need to be stripped of everything to realize how much is actually available to you in this world. It’s kind of a perfect film for 2020 with its characters’ resiliency and never-say-die attitude. Kajillionaire is a snapshot of a world that’s only what you make of it. What you fill it with (family, material items, love, or even money) is all up to you.

*Kajillionaire is currently available for rent or purchase on video-on-demand platforms like Amazon, Google Play, Vudu, and YouTube.*