Even in these bizarre times we live in, there’s still hope. Studios and filmmakers have been coming up with different ways to release the non-blockbuster types of films for home audiences. Whether through theater-at-home releases, drive-in movie theaters, or even releases on prominent streaming services, cinema is still finding a way to survive. Speaking of survival, first time director Andrew Patterson may know a thing or two about that. After his debut feature, The Vast of Night, was passed over countless times, it has finally found a home with Amazon. What’s even more impressive is that it may end up being the standout title of 2020 as well.

Prior to finding a home with Amazon Studios and its subsequent release on Amazon Prime this past weekend, the film was basically a red-headed stepchild. It was rejected by numerous major film festivals such as Sundance, South By Southwest, and Tribeca among many, many others. Even though The Vast of Night wasn’t accepted by Sundance, it premiered at the Slamdance Film Festival which takes place at the same time and on the same street in Park City, Utah, as the more prestigious and mainstream event. Patterson’s film would then walk away with the Audience Award for Best Narrative Feature at Slamdance and go on to be featured at a handful of other festivals.

The Vast of Night opens in the small town of Cayuga, New Mexico, in the 1950’s. While most of the town is at the local high school’s big basketball game, switchboard operator, Fay Crocker (Sierra McCormick), picks up some strange noises while connecting phone calls. She reaches out to her friend and radio disc jockey, Everett Sloan (Jake Horowitz), whose broadcast is also picking up the noise, to help discover its source. Together, and with the help of some mysterious radio callers, the two uncover a mystery that has been long suppressed in their small town.

Firstly, Andrew Patterson’s The Vast of Night is one of the most intriguing and original films we’ve seen in a long time. While it’s true that it has many influences (which we’ll get to), there are just so many unique storytelling and plot devices throughout the film. The film is truly something special that isn’t seen particularly often in modern filmmaking. The story is framed as an episode of a Twilight Zone-esque show called Paradox Theatre. Often, there are scenes that look as if they’re playing on an old television before viewers are thrust back into the action. In other spots, the visuals fade to black and the audience is left with only dialogue as if listening to a radio broadcast of the story. While there’s no doubt that some people will find this strange and maybe distracting, there’s something oddly hypnotic to these stylistic choices. You find yourself hanging on every word and really absorbing the full scope of the story being told. 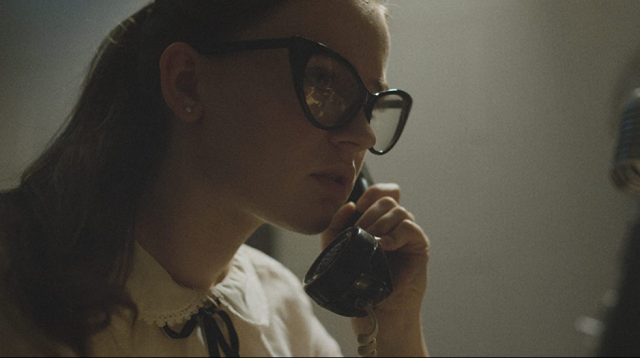 Much of this is due to the excellent script from James Montague and Craig W. Sanger. Like Patterson, this is the duo’s first feature and they sure knock it out of the park. There’s a lot of old timey dialogue and witty banter, especially from Jake Horowitz as Everett, but you’re never lost. In a way, the 1950’s lingo is like Back to the Future on crack. The decade’s rapid-fire vernacular may have viewers overwhelmed in the film’s opening moments but it eventually becomes some of the film’s charm. Dated sayings and phrases litter Montague and Sanger’s script early on but eventually take a backseat to more dramatic and mysterious dialogue that will have viewers on edge.

Of course, we can’t talk about dialogue without mentioning those making the delivery. The Vast of Night is largely a two person show. Jake Horowitz oozes 1950’s cool guy charisma as Everett walks through the high school gym chitchatting with everyone he comes into contact with. His role as a radio DJ is set up perfectly by this introductory scene as you never question it given his gift of gab. The one person he seems to have a fondness and connection with is Sierra McCormick’s Fay. Fay gets a new tape recorder, based on Everett’s recommendation, which sets up their interactions throughout the film. Once Fay experiences the strange transmissions, she reaches out to Everett due to his technological savvy. Both Horowitz and McCormick command the screen individually and as a duo. Like the script itself, their performances are intoxicating and you always want to learn more about them. There are a handful of other characters as well such as the secretive radio caller, Billy (Bruce Davis), and the town hermit, Mabel Blanche (Gail Cronauer), who turn in some of The Vast of Night‘s most memorable and suspenseful moments.

As original as the story often feels, there are tons of influences scattered throughout Patterson’s flick. We’ve already mentioned The Twilight Zone which seems to be the most obvious one of the bunch given the time period and subject matter. Similarly, The X-Files should probably be mentioned here with the science fiction/mystery plot. Even the radio station that Everett works at is called WOTW which has to be an abbreviation for the H.G. Wells novel and, later, Orson Welles broadcast of The War of the Worlds for obvious reasons. Some other titles that come to mind are Richard Kelly’s 2001 cult classic, Donnie Darko, for the overall strangeness and David Fincher’s 2007 murder/mystery, Zodiac. Like the characters in Zodiac, Everett and Fay stumble into a type of detective story in regards to the noises that has them searching for answers. Though, it’s unclear if the information they obtain is really going to solve the mystery or just add more layers of confusion. Even with all of these potential influences, The Vast of Night is still very much its own exceptional thing. 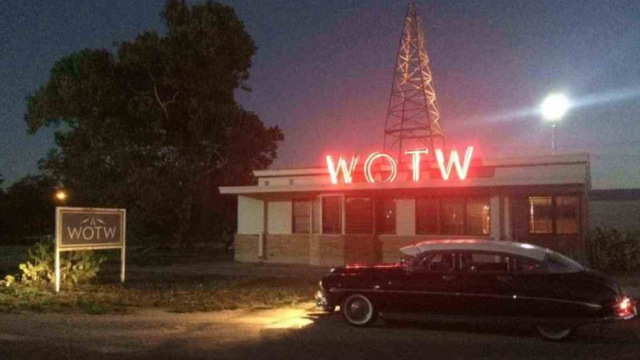 As is always the case, there are a few minor issues with the film. Though, they definitely don’t take away from the overall impact The Vast of Night will have on most viewers. There are a few instances where Everett and Fay meet up with other characters but the scenes, ultimately, don’t really go anywhere. The characters of Gerald (Mark Banik) and Bertsie (Cheyenne Barton) aren’t given a whole lot to do in their brief appearances. Both actors play their parts just fine but it’s strange that they just don’t have much impact by the end. Then, there’s a scene where Fay inexplicably brings her younger sister with her. It’s hard to say what the motivation was there. Perhaps, with additional viewings, there may be something that was missed during these scenes. However, the biggest offense is the overall murkiness of the film. The lighting in The Vast of Night is often extremely low but it mostly works. There are a few scenes that will leave viewers, literally, in the dark and it would’ve been nice for those to be brightened up a bit. The film has a very unique look and feel that sometimes get lost in these moments of excessive darkness.

As previously mentioned, all of these issues are merely nitpicks in a film this exceptional. It’s appalling how many times it was passed over by festivals especially with the early success it has had streaming on Amazon Prime. As the debut feature from director Andrew Patterson and with a script from first time screenwriters James Montague and Craig W. Sanger, The Vast of Night has no business being this good and this creative. This is the type of film that something like J.J. Abrams’ Super 8 wishes it could’ve been. In a year largely devoid of quality film releases after being ravaged by constant crises, The Vast of Night stands out as arguably the best film of 2020 to this point.

*The Vast of Night is currently streaming for free for Amazon Prime members.*