As the pandemic continues to ravage the country and a cruel 2020 rages on, star studded and noteworthy film releases are still being pushed back, shuffled around, and, in some cases, delayed indefinitely. Usually by now, Hollywood is gearing up for Oscar season with numerous top tier titles preparing for release in the coming weeks. With such a strange year nearing its end, there’s seemingly none of that happening at the moment. In saying that, it was a bit surprising to see a film with an ensemble cast land on Netflix recently. Antonio Campos’s new film, The Devil All the Time, hit the streaming platform two weeks ago to shockingly mixed reviews. Though, the film’s amazing cast, dark storytelling, and riveting story deserves more credit than it’s been getting.

Based on the 2011 novel of the same name by Donald Ray Pollock, The Devil All the Time is written by Campos and his brother, Paulo. Campos has gone a bit under the radar for the casual moviegoer while racking up a resume of favorably reviewed titles like 2008’s Afterschool and 2012’s Simon Killer. Perhaps his most notable film came in the form of 2016’s Christine, a biopic of 1970s television reporter Christine Chubbuck who infamously committed suicide on a live television broadcast. The filmmaker’s past work has often been grim and morbid so it shouldn’t be a shock to viewers that a film with a name like The Devil All the Time would also be in this same vein.

Narrated by the novel’s author, Donald Ray Pollock himself, the plot follows multiple characters over the span of about twenty years. It begins during World War II with Marine Willard Russell (Bill Skarsgård) finding a skinned, yet still living, soldier before ending his suffering. Willard returns to his home in Coal Creek, West Virginia, where he falls in love with a waitress named Charlotte (Haley Bennett). The two have a son, Arvin (Michael Banks Repeta), whose childhood is plagued by bullying, violence, and grief. Years later, a teenaged Arvin (Tom Holland), lives with a foster family and tries to protect his adopted “step-sister,” Lenora (Eliza Scanlen), from the ugliness in the world around them. This is before a new preacher, Reverend Preston Teagardin (Robert Pattinson), comes to town and takes an interest in Lenora. Meanwhile, Carl (Jason Clarke) and Sandy Henderson (Riley Keough) habitually pick up hitchhikers and perform a sort of lurid ritual on them for their own satisfaction and local lawman Lee Bodecker (Sebastian Stan) tries to secure his future in corrupt, unethical ways. 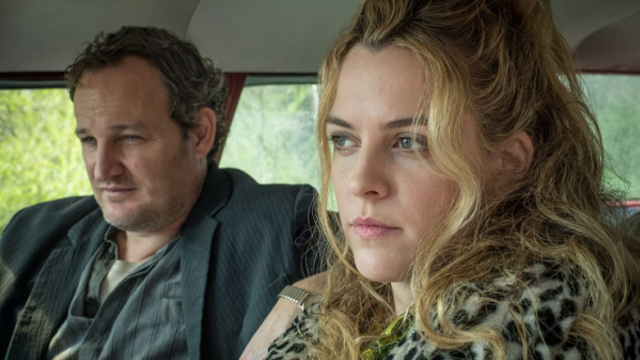 Essentially, The Devil All the Time is a film about loss, manipulation, cruelty, and vengeance. There’s very little hope or goodness outside of Eliza Scanlen’s Lenora. There’s no doubt that this is one of the reasons for the film’s less than stellar reviews. In a time when it seems like the world around us is crumbling, it’s possible that people are looking for something more uplifting. However, that doesn’t mean that The Devil All the Time should be written off. Its uncomfortable storytelling and winding plot are expertly crafted by Campos. In most cases, we’d probably knock a film for being packed with this much “stuff” but, here, it’s natural character building. Frankly, there are a lot of events that could be cut out due to their lack of contribution to the main plot of the film. Transitioning Arvin from Michael Banks Repeta to Tom Holland isn’t entirely necessary as Holland’s Arvin is the true focus. Yet, viewers learn so much from Repeta’s younger version of the character and his experiences with his father. We also maybe don’t need so many scenes with the Hendersons or deputy/sheriff Bodecker but, again, some of these throwaway scenes with them help show who these characters are. Normally, we point out how most films prefer telling over showing. This film does the exact opposite.

Speaking of the characters, they are what make The Devil All the Time such an engaging and frequently chilling experience. Coming off the back of his role as Peter Parker/Spider-Man in the Marvel Cinematic Universe, Tom Holland gives us something completely different here. The young actor is completely transformed as a troubled and suffering teen. The character of Arvin is defined by heartbreak and tragedy and, as a viewer, you live vicariously through him. He’s not a bad person by any means but he can’t seem to shake off these bad things that happen to him. Bill Skarsgård, another actor coming off of a huge role as Pennywise the Clown in the recent adaptations of Stephen King’s It, also cements his place as a star. As Willard, Skarsgård portrays a father figure that’s stern but caring and fair as well. We see Arvin go down a similar path as Willard but it’s not because of failed parenting or misguidance despite some unpleasant moments. Again, it’s almost like a family curse haunts the Russells and there’s nothing any of them can do to shake it. Eliza Scanlen, who’s carving out a nice early career for herself with titles like Sharp Objects, Little Women, and Babyteeth under her belt, remains the lone beacon of hope as Lenora in an otherwise darkened world and plays the role perfectly.

Lastly, we have Robert Pattinson as Preston Teagardin. Pattinson has long been stuck in the shadow of his role as Edward Cullen from the cringeworthy Twilight Saga. Slowly but surely though, he’s been shedding that image with roles like this, Connie Nikas from 2017’s Good Time, and initial impressions of him as the caped crusader in the trailer for Matt Reeves’ The Batman. Pattinson’s Teagardin is immediately unlikable but suave and calculating. There’s an unsavory aura surrounding the character that both Arvin and the audience can sense. The actor has been proving that he’s a chameleon that can disappear into his roles despite his signature look. As a viewer, you get lost in the role and that’s the sign of a top tier actor. We could go on and on about the rest of the cast as everyone is very, very good throughout the film. Though, it’s Holland, Skarsgård, Scanlen, and Pattinson that receive much of the spotlight. 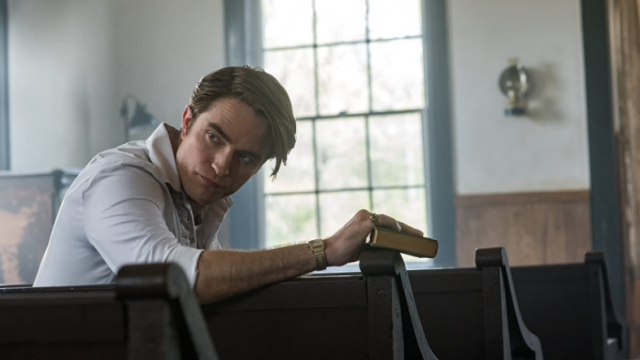 Though we’ve been singing the praises of The Devil All the Time, that doesn’t mean that we’re going to ignore the film’s criticisms either. Yes, it’s a very joyless overall experience. There’s not much to latch onto in regards to empowerment or overcoming demons. After all, what did you expect from a title like The Devil All the Time? As previously mentioned, there’s mostly ugliness in every character and scene with only Lenora providing an air of innocence. Is it really fair to condemn a film because of this though? There’s still a truly seductive and compelling tale at the heart of Campos’s film and it also boasts one of the most fleshed out assortment of characters that we’ve seen in a long time. These feel like actual people with true human urges, desires, interactions, and reactions that need to be satisfied. Campos takes a bloated plot and leads viewers on a depressingly dark journey that needs to be seen through to the end. If there’s any issue with the film, it’s that its ending feels a little quick. Once things hit a boiling point, the story moves at a rapid pace towards its finish. Even at 138 minutes, the film probably could’ve used a little more time to keep up with its deliberate pacing through the first two acts.

The Devil All the Time is a great crime/drama/thriller and it’s too bad that it’s not getting the credit that it probably deserves. Especially at a time when films with ensemble casts are pretty much nonexistent and studios are delaying their big moneymaking titles to 2021 and beyond, The Devil All the Time is a refreshing release that reminds us of the power of cinema. Its rural locations, impressively winding storytelling, and, of course, its fantastic cast make the film stand out among the pack in an odd year for filmmaking. When all’s said and done, The Devil All the Time brings you on a ride that may not be fun but it’s most certainly an experience that you’re not likely to forget any time soon.