It’s kind of shocking that we haven’t reviewed anything from our friends over at artist collective Count the Clock in quite some time. In the past, we’ve covered short films like The Ball and Mandy the Plumber while also showcasing their online art gallery and visual albums. In addition, we conducted an in-depth interview with director/creator Zach Lorkiewicz (check that out here if you haven’t) that coincided with the release of the music video for the song, “Bubblegum.” Here in 2020, Lorkiewicz and company return to their roots with the new straightforward and suspenseful horror short, The Knock.

The film opens with a Girl (Lauren Elyse Buckley) asleep in her bed. Soon, she awakes to the sound of a mysterious knock on her bedroom door and a creepy women’s voice (Deborah O’Brien) looking for someone named Jim. The Girl calmly tries to communicate with the woman on the other side of the door even as she becomes more hysterical and tries to open the door. Things escalate and eventually the Girl realizes that there may be something more sinister at play.

As was the case with the recently reviewed short, The Music, from Mark Battle, The Knock has a simple, yet effective, story behind it. It basically takes a horror cliche and nearly universal human fear and turns it into something wholly unique. Fear of the dark and an invasion into one’s personal space is something that mostly everyone can relate to at one time or another in their lives. On top of that, being awoken from a deep sleep can be disorienting and have you questioning reality in this type of situation. This is one of the reasons that Wes Craven’s A Nightmare on Elm Street worked so well. The most vulnerable one can ever be is when they’re asleep. Such uncomplicated ideas and tropes are adapted perfectly in The Knock and have some of that same charm as the nightmare sequences from the Elm Street franchise. 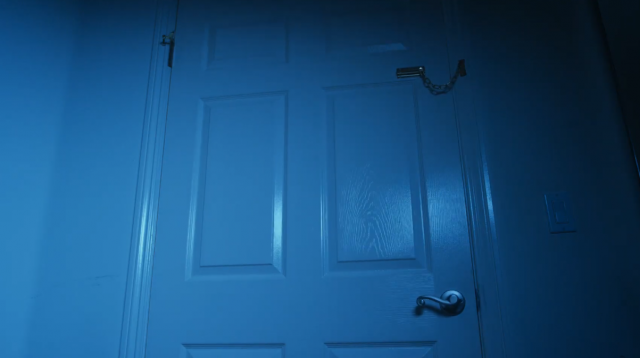 Much of the credit for this needs to go to writer/director Zach Lorkiewicz. Even in some of his earliest work, he has demonstrated an eye for camera shots, movement, and striking visuals. While The Knock takes place in only one room, the production never feels small or uninspired. In our past interview, we mentioned Lorkiewicz maximizing and visually exhausting his locations and that’s exactly what he does in this film. There’s so much focus on the door and its restricted movements that it almost becomes a character itself. The camera monitors every movement as the Girl is tormented by what’s on the other side. Lorkiewicz doesn’t limit himself to the door either as props around the room are labored over and change as the film continues on. There are also some fantastic visuals of Lauren Elyse Buckley whose movements are deliberate and effective. Specifically, there are a number of shots of just her eye as it rapidly scans the room. Again, it’s another simple idea but it comes across as a compelling image in a film full of them.

Speaking of Buckley, she’s wonderful as the Girl. As previously mentioned, her actions all serve a purpose and guide the viewer through her thoughts and feelings. The Girl’s initial ability to remain calm in such a stressful circumstance is portrayed well as is her inevitable breakdown. Buckley never feels as if she’s phoning in her performance as sometimes horror actors/actresses are wont to do. Everything she does feels legitimate and there’s emotion throughout her entire performance. Deborah O’Brien handles the voice of the Old Woman looking for Jim and does a stellar job. The eccentric cadence of her voice is unsettling and sets the tone for what’s to come. The only other cast member in the film is Anna Sofie Christensen who makes a brief appearance in perhaps the film’s most startling moment. 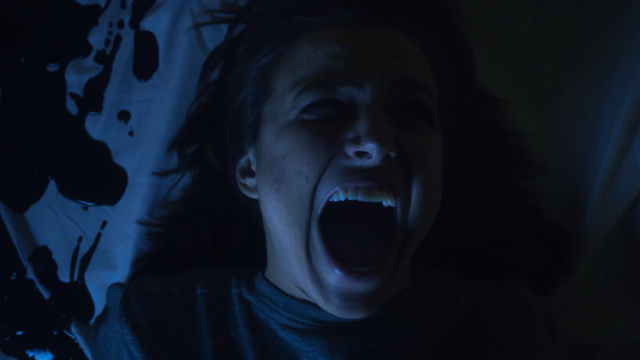 The Knock is really solid and enjoyable all around with barely an issue. The one nitpicky one that could be pointed out are the visual effects. There’s one shot that has some brief effects work that some may find to be hokey. However, this is a stylistic choice and it fits the kind of short horror content that’s produced by Lorkiewicz and Count the Clock. No, it doesn’t rival some of the practical work done by horror masters like Tom Savini or Rick Baker but it doesn’t feel like it’s supposed to either. For the sake of this review, we find the effects to be effective, unnerving, and weird but others may not appreciate them in that way.

Overall, The Knock is a riveting piece of short horror cinema. It’s another visual showcase for Zach Lorkiewicz and his Count the Clock crew with an excellent performance from Lauren Elyse Buckley. Never failing to impress with production design and camerawork, Lorkiewicz again exhausts the confined space of a young woman’s bedroom and makes it into a deeply ominous location. For those that have yet to jump on the Count the Clock bandwagon, The Knock is a fantastic place to start. It encompasses everything we’ve come to know about the collective and shows that there’s plenty more to come.