A few weeks ago, we reviewed the feature length debut from writer/director Aleem Hossain, After We Leave. With that film, Hossain created a cinematic world of intrigue with his gritty science fiction drama at its core. Viewers never get the full story on After We Leave‘s characters but are still drawn to them in their desire to know more. However, this isn’t the first time that Hossain has dropped his unsuspecting audience into tense situations with his characters. Piggybacking off of the success of After We Leave, Hossain has re-edited and and released his 2004 short film, The Thin Orange Line.

The short opens with a foot chase as Detective Hart (James Black) is in hot pursuit of criminal Billy Krule (Brian Silverman). Hart catches up with Krule and intends to gun him down in cold blood. Though, as Hart aims at his target, he hesitates and begins having a dialogue with an unseen being. Unbeknownst to Krule, Hart’s childhood imaginary friend, Borange Bear (Doug Brandl), appears to keep him from doing the unthinkable.

The tagline of The Thin Orange Line is “yet another gritty cop film with a dancing orange bear.” Well, that’s basically what the film is. While it certainly sounds ludicrous, Hossain is surprisingly able to make this idea work. Gritty cop dramas are largely overdone on a big scale and the introductory sequence of The Thin Orange Line has the standard making of one. James Black’s Detective Hart seems like a once good cop who must now take matters into his own hands to exact his own brand of justice and clean up his streets. Brian Silverman’s Billy Krule must’ve signed his own death warrant by doing something unforgivable. Hart doesn’t appear to enjoy killing criminals but he also refuses to let them run roughshod over the city. 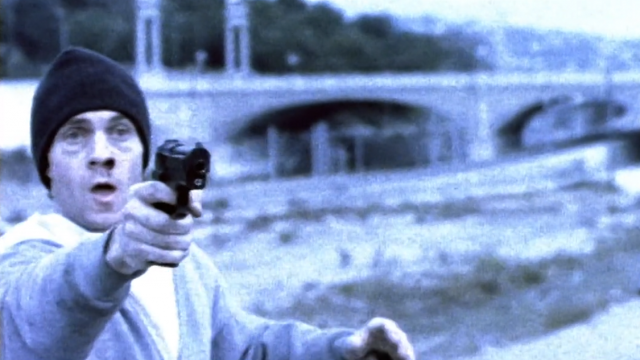 Instead of the standard crime drama, what we get is more of an exercise in humanity and a reminder of simpler times. Borange Bear appears standing in between Hart and Krule as Hart struggles to pull the trigger. Borange Bear talks him out of shooting Krule and distracts him by performing a dance from Hart’s childhood. When the dancing bear seems to be doing it incorrectly, Hart has to step in and refresh his memory. Yes, it’s definitely a surreal twist in the film but it helps flesh out the character of Hart. As people age, life takes them on a much different path than expected at a young age. Hart himself goes from a carefree youngster dancing with his imaginary bear friend to potentially murdering someone. Though it doesn’t go into a ton of depth on the subject, The Thin Orange Line will have you questioning how people transition into adulthood. What happened to Hart in life to get him to this point? Maybe the broader question is, how do any of us get to our current situations? The innocence and freedom of being a child is something that so many crave as they age. However, the grind of adult life too often causes people to overlook who they’ve become.

The Thin Orange Line only has three cast members but all three make the most of their time onscreen. Brian Silverman, who was our protagonist, Jack, in After We Leave does a solid job in a villainous role here. We don’t get much time with him but there’s an effective turning point where he becomes the villain after spending most of the film as the victim. Doug Brandl plays Borange Bear and does about what you’d expect from someone in a big, orange bear costume. He pulls off all of the dancing which couldn’t have been easy in costume. James Black is the star of the film as Detective Hart and deservedly so. As a viewer, you can tell he’s conflicted in his decisions but he’s also likable because of his internal struggles. His pursuit of Krule seems justified by his emotions and there’s something liberating about his reunion with Borange Bear. Black perfectly portrays these things and his character is likable throughout. 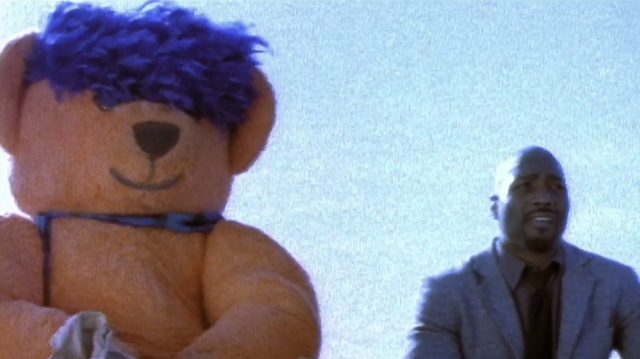 As previously mentioned, The Thin Orange Line was shot in 2004. Additionally, it was shot on 16 millimeter film. Needless to say, the look of the film is grainy and not as sharp or detailed as most of the work we review on this site. In this case though, it’s not a bad thing. While some films may look dated due to the equipment or methods of filming, The Thin Orange Line has a unique look that makes it feel timeless. With the gritty cop drama at its initial forefront, the visuals feel justified. It’s an imperfect look for an ugly situation. Much of this is because of the decision to shoot on film. Had the film been shot on an early 2000’s video camera, it probably would be much less appealing today. Film has a different and lasting quality that digital video just didn’t have years ago.

Aleem Hossain’s The Thin Orange Line is a solidly entertaining film with heart for the writer/director. Based on the film’s message about aging and childhood reminiscence, it has enduring appeal. The song and dance number may throw off some viewers but it’s a lot of fun. While some may find it too wacky or pointless for their taste, the context is what’s most important. It’s a film that has something to say but chooses to portray it in an admittedly weird way. Regardless, it does so effectively and The Thin Orange Line is certainly worth a watch.

*The Thin Orange Line recently screened as an official selection at Beyond Fest in their Shorts Program 2: This is Crime-Time.”