There aren’t many legendary filmmakers left that can pull viewers in on name value alone. While filmmakers like Francis Ford Coppola and Brian De Palma are still technically active, their most recent work doesn’t reach the heights of masterpieces like The Godfather or Scarface from their heyday. Even Steven Spielberg, who has remained consistent in recent years, doesn’t seem to carry the same weight he once did. Nowadays, there are only a handful of filmmakers whose new releases feel like an event. Directors like Quentin Tarantino and Christopher Nolan have that pull but neither have the longevity of the 77 year old Martin Scorsese. Throughout his legendary career, Scorsese has pumped out countless classic films and continues to do so to this day. His newest film, The Irishman, recently dropped on Netflix and hearkens back to his epically long mob opuses like Goodfellas, Casino, and The Departed.

The film largely revolves around the events leading up to the mysterious disappearance of Jimmy Hoffa, the former head of the International Brotherhood of Teamsters. Here in 2019, the name Jimmy Hoffa doesn’t quite have the clout as it once did. In fact, labor unions themselves have largely declined since Hoffa’s days. The former Teamster figurehead was the union’s president from 1957 to 1971 and played a huge role in its development. During its peak, the Teamsters had 2.3 million members and was the largest union in the United States. Regardless, Hoffa spent some of his time participating in organized crime and even served time for bribery and fraud. In 1975, Hoffa disappeared without a trace and has been missing ever since. He was legally declared dead on July 30th, 1982.

The Irishman opens in a nursing home with the elderly Frank Sheeran (Robert De Niro) recounting his time as a mafia hitman and labor union activist. The film then flashes back to the 1950’s where Frank sells some of his fresh meat shipments to local gangsters. Union lawyer Bill Bufalino (Ray Romano) gets him off of charges for theft and introduces him to his cousin, Russell (Joe Pesci). Frank and Russell strike up a close friendship and Frank is soon introduced to Teamster president Jimmy Hoffa (Al Pacino). Hoffa also becomes close with Frank and his family before appointing him as his personal bodyguard. From here, issues with fellow rising Teamster, Anthony “Tony Pro” Provenzano (Stephen Graham), and heat from the federal government plague Hoffa in the years leading up to his eventual disappearance.

While The Irishman may have a lot in common with Scorsese’s mafia films, it also encompasses everything the filmmaker has ever done. The familiar Scorsese tropes are there with mob hits and bad language but there’s also a lot of comedy and drama as well. Some of the dialogue and character interactions are almost reminiscent to some of Quentin Tarantino’s work minus the pop culture references. Scorsese’s 2013 film, The Wolf of Wall Street featured some of the director’s best comedic work but, surprisingly, The Irishman often isn’t too far behind. Robert De Niro’s narration as Frank Sheeran provides some comedy gold as do a lot of visual cues and text descriptions of some of the mob’s featured players. The second half of the film is much more dramatic than the first and delivers plenty of character building moments that get you fully invested in everyone you meet along the way. 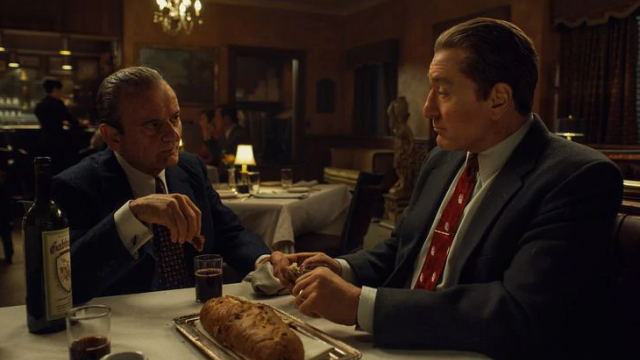 It’s also here that The Irishman displays oodles of patience. This is something that hasn’t been seen since some of Scorsese’s earlier work on films like Taxi Driver and Raging Bull. At an insane 3.5 hours in length, some “patience” is to be expected. Though, it’s in a much different way. Even with its extended runtime, the film never bores despite definitely feeling its length. It’s well paced and expertly handles its characters in crucial moments. During a lot of the scenes, viewers will experience a character’s thought process simply by viewing facial expressions and reactions. There’s a lot of talking throughout the film and not all the dialogue constantly progresses the story. However, this is a part of the character building that was previously mentioned. Because of this, the film may actually be one of Scorsese’s least violent but with plenty of thought and impact behind each violent outburst. There appear to be consequences for actions taken by the main characters and nothing happens without purpose.

Perhaps the best thing about The Irishman is its cast. Sure, actors like Ray Romano, Anna Paquin, Jesse Plemons, Stephen Graham, and Harvey Keitel are memorable in their roles. However, this is a three person cast. Despite a seemingly perfect match of talents, this is the first collaboration for Scorsese and veteran actor Al Pacino. Needless to say, it pays some massive dividends in The Irishman. It has probably been close to two decades since Pacino has had a defining performance in a career previously littered with them. Luckily though, he absolutely kills it as Jimmy Hoffa. For the most part, it’s classic Pacino with him yelling and swearing at people as only Al Pacino can do. Yet, there’s a complexity and depth to his character and the friendship he shares with De Niro’s Frank Sheeran. A chemistry between the two actors isn’t all that surprising with three previous collaborations between them but it’s nice to see it continue with both men well into their 70s. 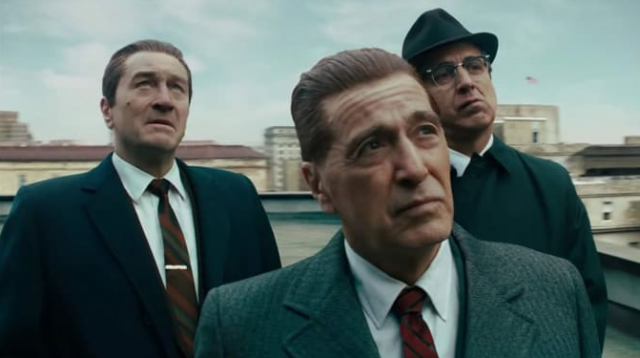 In contrast, Robert De Niro and Joe Pesci have co-starred in a number of the aforementioned films in this review and are no strangers to working with Scorsese. This is the ninth time De Niro and Scorsese have worked together and the fourth time for the director and Pesci. Like Pacino, De Niro has been mostly lukewarm in some middling films recently. In his role as Frank Sheeran though, De Niro solidifies his spot as one of the greatest actors of all time. It has been a long time since he has sunk his teeth into a role such as this and he’s phenomenal. The same can be said for Joe Pesci. He plays Russell Bufalino as a cold and calculated mafioso with intense loyalty and gratitude to those that show him the same. Pesci retired from acting back in 1999 but was coaxed out of retirement for this role. After seeing the film, it’d be hard to envision anyone else as Russell due to Pesci’s incredible swansong performance. Frankly, it’d be an absolute shock if all three actors didn’t receive Oscar nominations for their respective roles.

When all’s said and done, The Irishman shows that Martin Scorsese is still at the top of his game. It also shows that the triumvirate of Robert De Niro, Joe Pesci, and Al Pacino are still able to wow audiences even today. In terms of criticism, you could point to the gaudy runtime or the de-aging effects on Robert De Niro during the early parts of the film. However, this isn’t a boring film even with the long runtime and the de-aging is actually done pretty well. Yes, it’s noticeable due to the actor being 76 years old but you forget about it quite quickly as you progress through the film. Even though The Irishman may not reach the heights of some of Scorsese’s best work in films like Goodfellas, Gangs of New York, or The Departed, it’s still a triumph of modern filmmaking and it honors three legendary actors deserving of all their past and current praise. Ultimately, it’d be considered an insult if The Irishman doesn’t receive recognition in every top category during the upcoming awards season.

One Thought to “Netflix Original Review: The Irishman”