After the numerous incarnations of Batman over the years, one would think that the character may be starting to get stale. On the contrary, Batman has been as popular as ever. Christopher Nolan created a trilogy of wildly popular Batman films followed by Zack Snyder’s lackluster reintroduction of the character in Batman v Superman: Dawn of Justice. In that film, though, Ben Affleck’s Batman was the best thing it had going. There was also the long awaited animated version of Batman: The Killing Joke that was released earlier this year. A Lego version of the character popped up in The Lego Movie and is even receiving his own solo adventure in next year’s The Lego Batman Movie. However, there’s one film that hasn’t gotten nearly the amount of attention that it should have: Batman: Return of the Caped Crusaders.

While many remember the recent interpretations of the character, it’s hard to forget the 1960’s Batman television show as well. The campy nature of the show, the lame jokes, the Bat-fight words like “Pow!” that occur during action scenes are all classic. Of course, there’s also the theme song. Even if you’ve never seen the show, there’s no doubt that you know this song. In Return of the Caped Crusaders, all of these things are back and better than ever in a beautifully animated adventure. In addition, Adam West, Burt Ward, and Julie Newmar reprise their roles as the dark knight, the boy wonder, Robin, and Catwoman respectively.

The film begins with a credits scene featuring the classic theme song and re-creation of some iconic Batman comic book covers. The plot then follows Batman and Robin as they battle the “holy unholy alliance” of the Joker (Jeff Bergman), the Riddler (Wally Wingert), the Penguin (William Salyers), and Catwoman. The villains steal a replica ray that allows them to create identical items. Eventually, Batman and Robin stop the villains and obtain the replica ray, but Catwoman makes Batman slowly turn evil thanks to her use of “Bat-nip.” Yeah, Bat-nip. After being ousted by the other villains due to her love/hate relationship with Batman, Catwoman teams up with Robin to undue the damage she did and save Batman from himself. 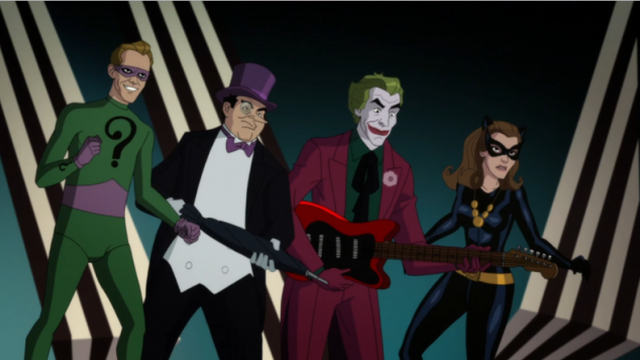 The plot may sound somewhat confusing but it really isn’t. It’s overly ridiculous yet most of the details are extraneous and explained outright by the characters. Like in the television show, Batman is the world’s greatest detective and deduces the villains’ plot through the most ridiculous assumptions. The dynamic duo track them from a television studio to a TV dinner factory and, eventually, all the way to the moon. In a world full of dark interpretations of the character, this lighthearted and humorous throwback take on the character allows viewers to just sit back and enjoy the ride.

It’s great to hear Adam West and Burt Ward as the heroes once again. The versions of their respective characters are as iconic as they are goofy. Julie Newmar as Catwoman was a nice touch as well although her performance isn’t quite as good as the others. All of the characters also look exactly like their 1960’s counterparts. Of course, Cesar Romero, Frank Gorshin, and Burgess Meredith have all passed away over the years but their replacements do very well in their voice roles. Jeff Bergman is quite good as the Joker even though it seems like he’s doing his best Mark Hamill impression of the character. One minor complaint about the villains is that both the Joker and Riddler have a very similar laugh. It’s not a huge problem but it’s a slight distraction. 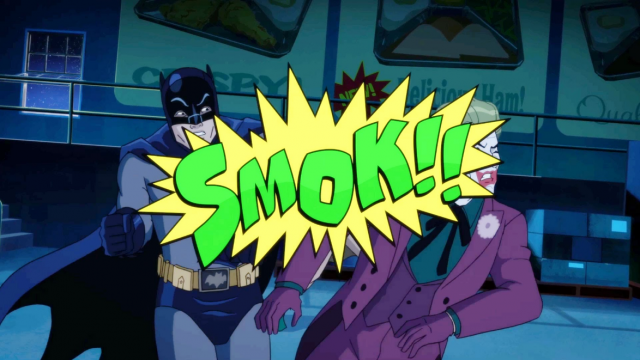 There are so many things that Return of the Caped Crusaders does to poke fun as well as honor all interpretations of Batman. There’s constant alliteration used in phrases like, “capricious cronies in criminality,” as well as staples of the show like the Shakespeare bust hiding the button for the entrance to the Batcave. Also, there are a lot of nods to other Batman films. At one point, Adam West’s Batman says, “You wanna get nuts? Let’s get nuts.” This is actually a line spoken by Michael Keaton in Tim Burton’s Batman from 1989. Catwoman says that she’ll retire from being a criminal if her and Batman move to Italy and sip tea in a cafe which pays tribute to Christopher Nolan’s The Dark Knight Rises. Robin responds to the proposition with, “Holy unsatisfying ending!” as a little jab to that film.