In 2017, true crime documentaries are nothing new. Everyone from Jack the Ripper and H. H. Holmes all the way to the Manson Family and the West Memphis Three have had films made about them. After the massive success of their own miniseries, The Jinx, and Netflix’s Making a Murderer, HBO released another documentary based on a heinous crime. Beware the Slenderman finally debuted on the long running cable network just last week.

The film premiered at South by Southwest last March, making its rounds on the festival circuit before playing on television. It was directed by Irene Taylor Brodsky. Brodsky was previously nominated for both an Emmy and an Academy Award in 2009 for her documentary short film, The Final Inch, which was also distributed by HBO.

Beware the Slenderman centers on two twelve year old girls from Waukesha, Wisconsin, Morgan Geyser and Anissa Weier, who lure their friend into the woods and stab her repeatedly. They do so to appease a fictional being named Slenderman. He’s an internet-based character that stalks and terrifies people, mainly children. He was created by Eric Knudsen for a Photoshop contest on the Something Awful website (pictured below). The character is depicted as a tall, pale, faceless man in a black suit. Since his creation, users have adapted the character into fan art and web-based horror fan fiction called “creepypastas.”

The film covers a lot of information in its runtime which is just shy of two hours. Viewers get history, interpretations, and mythos of the Slenderman character along with bios on the two girls as told by their respective sets of parents. The girls themselves were not interviewed for the film nor are their faces shown often outside of family recordings. Their faces were not to be filmed during any of the court hearings. Although, there are one or two moments that seem to have been snuck in. 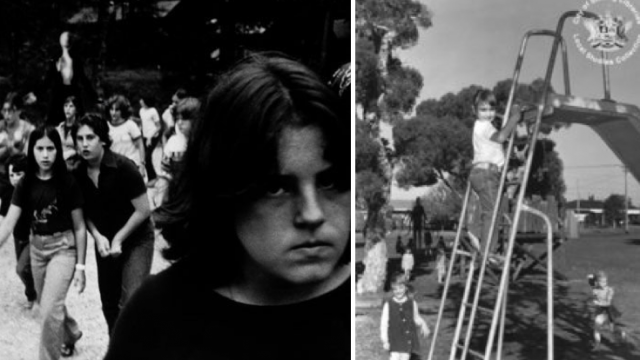 The most heartbreaking thing about the story in general is how it affects both sets of parents. They don’t appear to be neglectful or distant with their children. There may be a hint of naivety from Morgan Geyser’s mother but, from the documentary, there aren’t any glaring allusions to the girls perpetrating such a vile act.

Similarly to the documentary, Cropsey, this film discusses eerie folklore setting a backdrop for the real life events that occur. It definitely sets the mood and there’s a creepy atmosphere for the duration of the film. Once you get into the police interrogation footage, things start to get really bizarre as the girls recount their motivation for the stabbing. Their respective stories seem to be truthful as they both entirely believe in Slenderman.

Where the film tends to falter is in its failure to mention the victim. Payton Leutner is referred to by name throughout the documentary but her story is mostly glossed over. Initially, it’s even hard to determine whether she lived or died from her wounds because the film just doesn’t spend a lot of time on her. While this may possibly be a request from Leutner’s family, it’s odd that photos of her are still used. It’s unfortunate that this essential part of the story was left out. A film like this should be just as much about the healing process (both physical and mental) as it is about telling the facts and recounting grisly events. 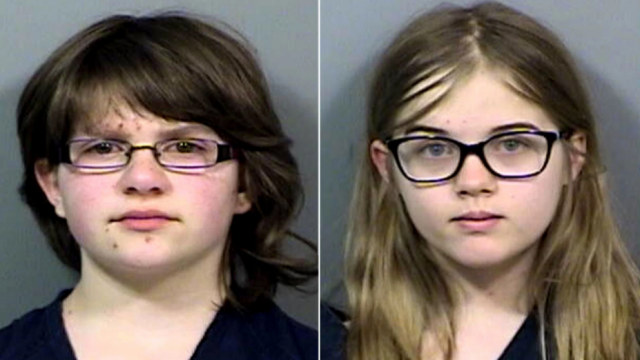 In a similar vein, the documentary paints Geyser and Weier out as victims of their crime as well. Yes, it’s sad that two girls committed this type of crime at such a young age. Yet, it doesn’t change the fact that it was premeditated even if they truly believed in and were afraid of Slenderman. As mentioned before, their stories seem truthful and are all the more chilling for it. Perhaps as the girls have gotten older (the crime took place in 2014), they’ve felt remorse for their actions and understand the severity of the matter. However, it shouldn’t be forgotten that there was an actual victim in the stabbing.

Ultimately, Beware the Slenderman is an intriguing but unnerving watch. The mythos of Slenderman coupled with the real life crime make for a chilling combination. It’s hard to figure out how these young girls took the Slenderman stories as truth. Though, the documentary does provide some insight. The film isn’t as riveting or confrontational as Making a Murderer but it has an appeal of its own. Despite some flaws, Beware the Slenderman is worth a watch for anyone interested in crime documentaries or urban legends and folklore.