For the past four years, while other more high-profile shows have been tanking in quality, Starz has been airing one of the best kept secrets on television. The cable/satellite network’s aired the series finale of its stellar pirate drama, Black Sails, last weekend.

For those unfamiliar, the show is set during the Golden Age of Piracy. Real life pirates such as Jack Rackham, Anne Bonny, Benjamin Hornigold, Charles Vane, and Edward Teach AKA Blackbeard have all been main characters on the fictionalized show at one time or another. Set twenty years before the events of Robert Louis Stevenson’s novel, Treasure Island, the events of the show mainly focus around the Spanish gold of the Urca de Lima. In the first season, Captain James Flint (Toby Stephens) plans to steal the ship’s gold while the later seasons focus on using the gold to govern and control New Providence Island and its capital, Nassau.

In Season 4, the war between the pirates and Governor Woodes Rogers (Luke Roberts) is on. Following the public hanging of Charles Vane (Zach McGowan), the pirates band together to retake Nassau from England’s control. Throughout the season, the ups and downs between Flint and the growing legend, Long John Silver (Luke Arnold), take center stage. Following an early battle for Nassau, Silver is thought to be dead after he gets his artificial leg caught and is dragged down into the sea. Flint and Silver’s love interest, Madi (Zethu Dloma), reach an understanding in their efforts to reclaim and use the Urca’s gold.

Billy Bones (Tom Hopper) leads an army of pirates who don’t necessarily see eye to eye with Flint’s crew. Billy carelessly severs trust with the island’s slave population who Flint wants to join in the fight for Nassau. Also, Jack Rackham (Toby Schmitz), Anne Bonny (Clara Paget), and Edward Teach (Ray Stevenson) seek retribution for the death of Charles Vane. Meanwhile, Eleanor Guthrie (Hannah New) uses Woodes Rogers, her new husband, to exert her own brand of power across the island and brothel owner, Max (Jessica Parker Kennedy), is up to her old tricks by aiding whoever may grant her the most power. 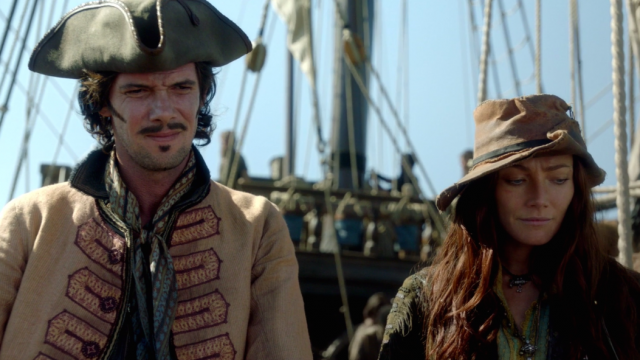 Black Sails Season 4 is the culmination of the entire series. The show never lost track of what it was essentially about. This is a show about pirates and their quest for power and riches. There’s a camaraderie that unites them, especially in the face of a danger like Woodes Rogers, but they all have their own personal interests at heart. What makes these despicable characters so memorable and even likable is that they do abide by a type of code. While they’re in constant competition with one another, they’re able to recognize problems of a larger scope as well.

The relationship between Silver and Flint is ultimately at the heart of Black Sails. Silver continuously becomes more honored and respected following Billy’s attempts to build a legend behind the man. Flint has always been a controversial figure within the story. He often did vile things that benefited himself. Yet, his crew, as reluctant as they may be in trusting him, often see their own benefit with following Flint too. By the end of this season, you see Silver toe the same line that Flint had in the past. Even though Silver has been one of the most likable characters from the show’s start, you do start to question his morals just as much as Flint’s.

Like with many television shows, Black Sails has had some heartbreaking deaths throughout its run. Season 4 is no different. The most devastating is that of Edward Teach. It’s a moment you don’t necessarily see coming and it propels Woodes Rogers into the role of a hated villain. In truly brutal fashion, Teach is keelhauled (tied up and dragged through the water against the bottom of a ship) numerous times before Rogers finishes him off. Like Charles Vane before him, it’s a horrible death of a beloved character. Despite only being in eleven total episodes, Stevenson as Teach leaves a lasting impact on the entire series. 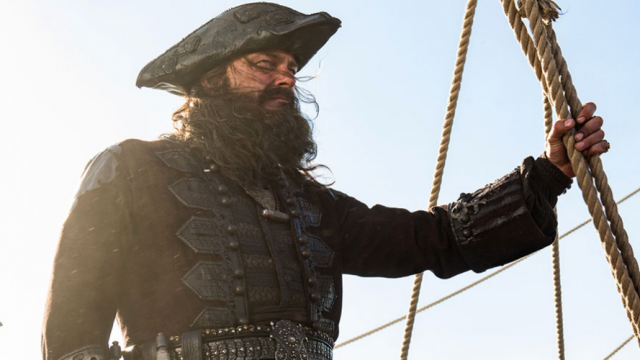 As previously mentioned, relationships are at the center of Black Sails. Charles Vane and Eleanor, Jack Rackham and Anne Bonny, and Anne and Max have all been important relationships within the series. Though, none of them were as touching or as poignant as the final scene between Silver and Flint. The show had been building towards a climax pitting the two friends against one another for quite some time. Their last interaction with one another doesn’t disappoint. In a highly emotional moment, Silver gives Flint an ultimatum that’s just as distressing for a viewer as it is for the characters. It’s one of the best performances in the entire series.

Overall, Black Sails is a must-see for fans of television drama. This isn’t a stereotypical swashbuckling pirate show. It’s as serious as can be. Sure, there are lighthearted moments, especially with Silver in Season 1, but they become fewer and farther between as the show goes on. It’s aesthetically beautiful, wonderfully acted, and very well written. It also has one of the greatest theme songs of all time. The lone downfall is in the final episode. It just feels somewhat lackluster but that’s not uncommon for a series finale. Also, don’t forget that everything’s a precursor to the events of Treasure Island. Will we ever see a show based on the Stevenson book? That remains to be seen but it’s definitely possible. While it’s sad to see Black Sails go, the show had a great run and is one of the most underrated television shows in recent memory.