With the multitude of films that are released every year, sometimes one just falls through the cracks. Today, we’re reviewing Guillermo del Toro’s Crimson Peak just in case you missed it…

Eerie. Elegant. Fantastical. Horrifying. These are all words that can be used to describe Crimson Peak. It is eerie in the sense that at its most basic foundation, Crimson Peak is a ghost story. It is elegant because of the sheer beauty of the cinematography where almost every shot could be a painting. It is fantastical because of how truly alive everything feels; animate or inanimate. Finally, it is horrifying because of the length that some characters go through to achieve their goals.

If any of this sounds familiar, it’s because these are traits of previous films either directed or produced by Guillermo del Toro. Del Toro is an underrated filmmaker which could be due in part to his own making. He hasn’t consistently directed films but he has wracked up a good chunk of producing credits (especially since the mid 2000’s). He was originally slated to direct the recent Hobbit trilogy before backing out although he did receive screenwriting credit on all three films. With Crimson Peak, del Toro has refined his talent as a filmmaker and created an extremely entertaining experience.

The plot centers around Edith Cushing (Mia Wasikowska) and the mysterious Thomas Sharpe (Tom Hiddleston) as they inhabit Allerdale Hall, the dilapidated Sharpe family mansion, after Edith suffers the loss of her father. Along with this, supernatural events begin to occur upon their arrival. The story twists and turns as Edith is tortured by the horrors trapped within the mansion’s walls while she also attempts to solve the mystery behind the Sharpe family. Jessica Chastain and Charlie Hunnam round out the main cast as Thomas’s slightly deranged sister, Lucille, and Edith’s friend, Dr. Alan McMichael, respectively. 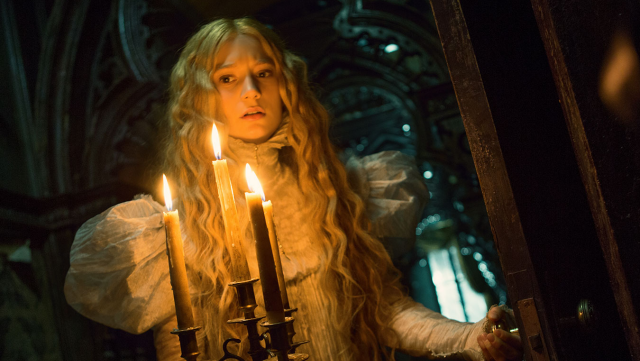 The mansion itself is a character in the film as it merely feels like a living, breathing entity. It sits on top of a red clay mine that it is slowly sinking into. When Edith first arrives at Allerdale Hall with Thomas, he mentions how the floorboards are rotting and the clay oozes up through the cracks. Despite the mansion’s ramshackle nature, the cinematography presents it as a work of art. The massive archways, the red clay “bleeding” down the walls, and the overall gothic feel of the architecture is awe-inspiring. The usage of color is simply fantastic when juxtaposing the icy blues of the dark mansion with the warmth of candlelight.

Of course, any good horror or fantasy film is nothing without the supernatural and Crimson Peak doesn’t disappoint. Much like he had with the Hellboy films and Pan’s Labyrinth, del Toro had a stellar special effects department working on Crimson Peak. There are not a ton of different types of ghosts/creatures but the ones that are seen are unique and have their own distinct traits. Again, the design of the mansion only adds to the effectiveness of the horrors within. Del Toro even included a scene that is virtually identical to the infamous Pale Man scene in Pan’s Labyrinth and just as spooky. Since this is mostly spoiler free, you’ll just have to see it to understand. 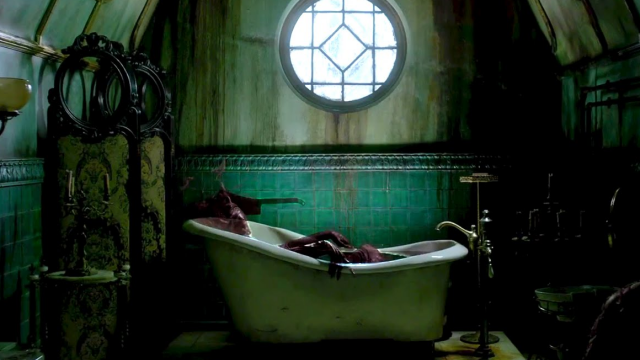 What del Toro does best, though, is build suspense. It’s so common these days for horror films to feature a plethora of jump scares. For example, a character may be looking for a killer only to open a door and have a shrieking cat jump out at them. Del Toro doesn’t use cheap scares just to get a knee jerk reaction out of viewers. The horror of Crimson Peak is in its subtlety. Sure, there are a few jumpy moments but they occur after there is legitimate tension built within the scene. When something horrific finally is shown, it is truly memorable and isn’t a throwaway moment that you’ll forget by the time the scene ends.

Crimson Peak can best be described as a trip through a gothic and demented land of Oz. It is a modern day fairy tale in the vein of Hansel and Gretel or Little Red Riding Hood. Horribly disturbing events occur but ultimately the wrongs are righted and the characters are able to breathe collective sighs of relief by the story’s end. Crimson Peak isn’t a perfect film but it has plenty to enjoy. It’s intense, sometimes gory, and even sometimes romantic. It has a bit of a Bride of Frankenstein meets Sleepy Hollow vibe. Guillermo del Toro has crafted an aesthetically beautiful film that viewers can sit back and appreciate for what it’s worth in all of its gothic fairy tale glory.