Over-the-top action, gore, and a little bit of comedy propel Hardcore Henry from being a ridiculous idea to an entertaining cinematic experience.

Hardcore Henry seemingly came out of nowhere. The trailer was attached to Batman v Superman: Dawn of Justice and then was released shortly after in the United States. The film actually premiered in September 2015 at the Toronto International Film Festival. For such a niche type of film, there wasn’t a whole lot of marketing strategy behind it. It was certainly a surprise when Hardcore Henry actually ended up being very entertaining for what it was.

The plot is a simple kidnapping and revenge story. Viewers are dropped into the film as a mute individual known only as Henry. Somehow, Henry ended up in a laboratory missing an arm, a leg, and all of his memories. He is given mechanical limbs by a beautiful young woman, Estelle, who claims to be Henry’s wife. When the lab is infiltrated by a group of mercenaries, Henry and Estelle attempt an escape only for Estelle to be subsequently abducted. Despite having no memory, Henry seeks to find Estelle and kill anyone who gets in his way.

Going into it, viewers must understand the style of the film and that it is shot entirely from a first person point of view. Video gamers, of course, will be familiar with what the filmmakers are trying to accomplish but non-gamers may not find the experience quite as enjoyable. The film was shot almost entirely on a GoPro camera so, as one may imagine, the shots can be quite jostling. The action sequences are very fast paced and sometimes the shaky camera does start to annoy and disorient. After making it through some of the opening action scenes, though, it’s easy to get sucked into the events happening onscreen while also realizing how unique Hardcore Henry is. 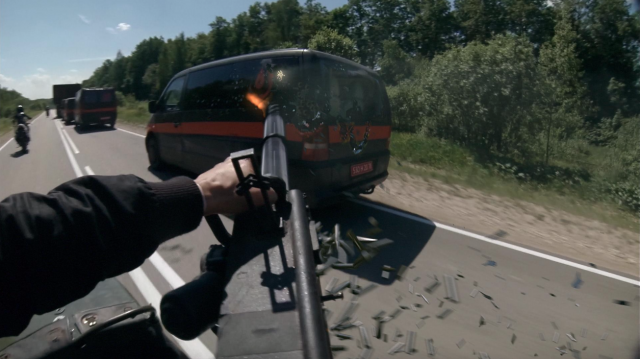 The closest thing to this film would be the first person shooter scene in the awful film adaptation of the classic video game, Doom. Whereas the FPS scene in Doom seemed like a last ditch effort to save face with the gaming community, Hardcore Henry should appeal to gamers organically because of its style. While shooting an entire film in first person may be considered gimmicky, it is actually done quite well and does not look too fake or cartoony.

Perhaps the highlight of the film is District 9 star Sharlto Copley as Jimmy. Jimmy finds and helps Henry soon after Estelle is abducted. Similar in fashion to video game series’ like Grand Theft Auto and Assassin’s Creed, Jimmy sends Henry on short “go here, do this; go there do that” fetch quests. Although his main function is to direct the narrative of the story, he is also the comic relief of the film. Without spoiling too much, he takes on the role of multiple characters and continually shows up out of nowhere to further assist Henry on his quest for vengeance. 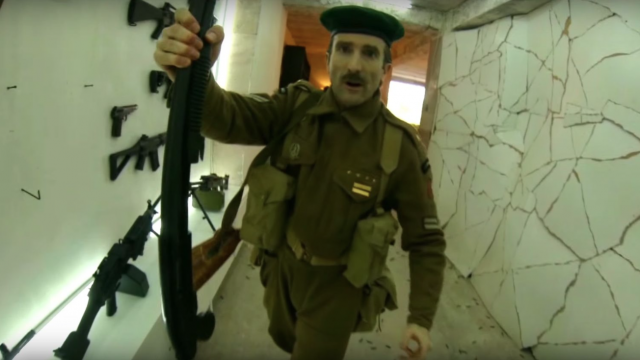 If there is one word to describe Hardcore Henry, it would be “fun.” If you’re a fan of action films, video games, or even unique film experiences in general, it’s worth a watch. It just seems like the filmmakers and the cast had fun making the movie which contributes to the mostly enjoyable 90 minute runtime. There are a ton of ludicrous action scenes, some fantastic gory special effects, as well as a lot of senseless violence. Hardcore Henry is quite possibly the closest thing there will ever be to a quality video game film and the sad thing is that it’s not even based on one.

Russian director, Ilya Naishuller, has achieved an unprecedented feat in crafting a film that can appeal to gamers. It is well known that there are no real quality video game adaptations but this film proves that even with a thin plot and a potentially polarizing gimmick, there are ways to satisfy and entertain fans. Although Hardcore Henry is certainly not a film for everyone, it is ambitious in execution and should be enjoyed at face value.