Well, alright then. Let’s talk Game of Thrones. Since 2011, Game of Thrones has, arguably, been the best thing going on television. Its engrossing story and must-see quality has raked in millions of viewers across its historic run. It’s one of those shows that seemingly everyone has watched and experienced together. Over the years, the series has reached nothing but tremendous heights for as long as it has been on television. However, the show has come under a bit of fire (no pun intended) in its eighth and final season. Fans have been largely disappointed with the show’s swansong. It has even gotten to the point that a petition to remake Season 8 has accumulated over one million signatures. The series finale of the iconic HBO show aired last night and it was certainly something. Is the final season of Game of Thrones as bad as many have claimed. Frankly, it kind of is.

Firstly, it should be known that there will be spoilers going forward. After eight seasons, it’s expected that anyone reading this will be more than familiar with the show. Typically, we tend to keep these wrap-ups spoiler free but an exception will be made for such a polarizing and hotly debated season. Similarly, there’s usually a bit of recap on the show’s events. Of course, these events will be discussed but in a more spoiler heavy approach and not necessarily about the overall effects on the characters and the direction of the show.

Game of Thrones Season 8 kicks off at an oddly slow pace given that there are only six episodes. Jon Snow (Kit Harrington) and Daenerys Targaryen (Emilia Clarke) arrive in Winterfell and learn that the Army of the Dead have breached the Wall and are making their way south. At Winterfell, Jon also reunites with the three remaining Stark children: his brother, Bran (Isaac Hempstead Wright), and his sisters, Sansa (Sophie Turner) and Arya (Maisie Williams). Though, Jon finally discovers from his friend, Samwell Tarly (John Bradley) that he’s actually not Ned Stark’s bastard son and is actually Aegon Targaryen, the rightful heir to the iron throne. This complicates matters between Jon and Daenerys especially as the people rally behind Jon and eventually drive Daenerys to madness.

Ultimately, there are three main plot points to follow across Season 8. There’s the relationship between Jon and Daenerys in which Jon is a threat to his newfound queen whether he wants the throne or not. Then, there’s the impending doom in the shape of the Night King and his army of White Walkers marching towards Winterfell. Finally, there’s the battle for King’s Landing between Daenerys and the show’s overall villain, Cersei Lannister (Lena Headey). Fans knew that these were inevitably going to be the biggest moments of the show for a few seasons now. Sadly though, the unbelievably consistent showrunners, David Benioff and D.B. Weiss, ran out of steam for Season 8. Sure, they delivered an outcome for each of these showdowns but in uncharacteristically lazy and nonsensical fashion. 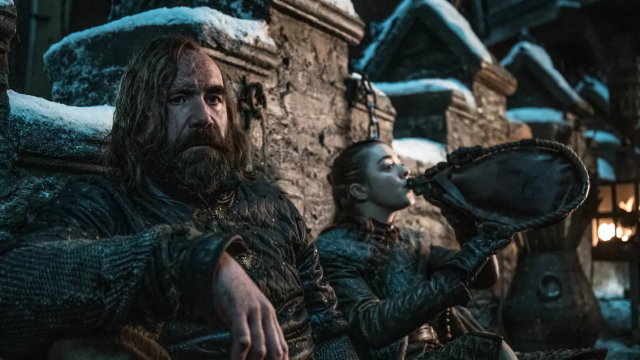 This is the final warning that there will be heavy spoilers about Season 8 going forward. As previously mentioned, the final season kicks off somewhat slow as you see characters reunite one last time. Then, there’s a “calm before the storm” episode in which many fan favorite characters spend the night basically hanging out, drinking, and waiting for the Night King to arrive at Winterfell. Finally, with the third episode, fans are treated to an epic battle between the living and the dead. However, the episode has been deemed too damn dark to see by most viewers. Additionally, many believe that the living’s triumph over the White Walkers was far too easy given the show’s buildup. For the majority of the show, the Night King and his army have been more of a looming threat whereas Queen Cersei has been the show’s true antagonist. In Season 7, the Army of the Dead was finally given time to shine as they surrounded some of the show’s mightiest warriors and the Night King claimed a dragon for himself to ride into the upcoming battle. Here, though, they were relegated back to an afterthought as the Night King was quickly dispatched by Arya. While the Night King’s demise was a great scene overall, it’s strange that Arya was the one to slay him and Jon Snow was nowhere to be seen.

Following the victory at Winterfell, Jon and Daenerys rally their armies for the battle for the iron throne against Cersei and her forces. Though, Daenerys is attacked by Euron Greyjoy (Pilou Asbæk) and his navy which quickly prompts her to head to King’s Landing to face Cersei. After the beheading of her best friend, Missandei (Nathalie Emmanuel), Daenerys burns King’s Landing to the ground on the back of her dragon. Episode 5 has gotten some flak from fans as it was a very sudden turn for Daenerys who meant to rule fairly and unite the seven kingdoms. Instead, the show decided to go the route of turning her into what she never wanted to become: her father, the Mad King. Unfortunately, all of Season 8 felt quite sudden in most instances but Daenerys’ descent into the Mad Queen was a logical arc for the character. She’s not actually the heir to the throne and her closest supporters are either dead or have betrayed her by this point in the show. She chooses to rule in a way that she sees as just but also strict to avoid the mistakes of her past. Daenerys burning an entire city to the ground on her dragon is a poignant moment and sets up for a somber and unpredictable finale to one of the greatest television shows of all time. 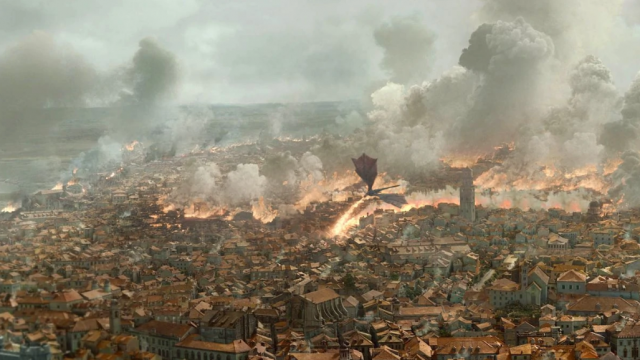 Sadly, the series finale of Game of Thrones is somber and unpredictable in all bad ways. The episode starts off with snow-like ash covering the city of King’s Landing in an eerie and chilling way. That’s honestly the best thing about it as it’s all downhill after that. Characters like Tyrion Lannister (Peter Dinklage), Davos Seaworth (Liam Cunningham), and Jon Snow are shaken to the core by Daenerys’ actions. Obviously, something has to be done and, somehow, the show manages to do it in the least climactic way possible. Jon simply stabs Daenerys and that’s that. While the scene itself is emotional, it’s one thing that Game of Thrones has never proved to be and that’s predictable. Jon killing Daenerys was an expected outcome in many ways. Though, due to Jon’s kind and loyal demeanor, it would’ve been much more of a shock if someone else killed her for him. Say, if Arya would’ve ever used her forgotten face changing abilities to masquerade as someone Daenerys trusted, it may have made for a much better outcome.

The remaining time spent with Game of Thrones Season 8 is very strange and perplexing. Leaders and figureheads to guide the new world need to be decided following the imprisonment of Jon Snow for the murder of Daenerys. There aren’t any real logical reasons for the choices made. They just kind of happen. Tyrion is being held prisoner as well but convinces the Starks and a number of other lords and ladies to appoint Bran as king. Then, Sansa declares the North an independent kingdom and nabs a throne of her own to become the Queen in the North. Jon is exiled back to the Wall as part of the Night’s Watch and… that’s about it. During all of this, you may find yourself wondering what it is that you’re watching. It certainly doesn’t feel like Game of Thrones in the least. It just feels cheap, lazy, and not at all what people expected. Basically, the episode is overly predictable until it goes completely insane and is unpredictable in the worst possible way. It’s a very strange turn for a show that has been so good at giving its viewers what they want in the most rewarding ways. 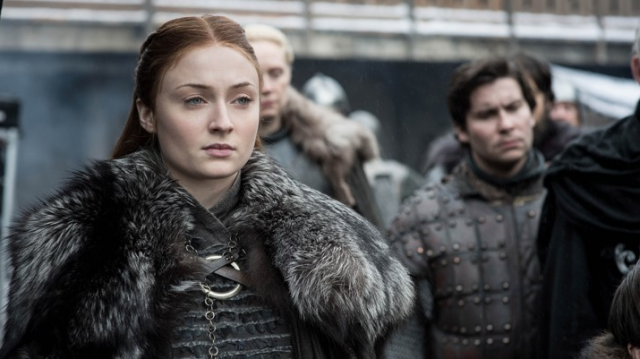 What exactly happened here? Where’s the real Game of Thrones and why did these six schizophrenic episodes feel so rushed despite a yearlong break from television? You could make the assumption that maybe without a template from George R.R. Martin’s popular novels to go off of, the showrunners finally lost their touch. Yet, the also abbreviated Season 7 was excellent and provided an, ultimately, unreachable level of hype. To date, Martin still hasn’t released the sixth novel in his A Song of Ice and Fire series. This has caused the showrunners to write their own storylines and this shoddy conclusion themselves with only some rough details from Martin himself. It’s hard to say if this is truly the problem with Season 8 or if they just didn’t know what to do with this world anymore.

Needless to say, fans across the globe are not happy. Will the petition with its one million signatures and counting cause HBO to order a remake of the season? Highly doubtful. However, there’s no doubt that Game of Thrones Season 8 represents one of the biggest collapses in the history of television. To be fair, the season isn’t all bad. There’s still some good character work and the battle with the Night King is good despite being so murky to look at. Daenerys has a good character arc even if it’s slightly rushed. It’s just kind of funny that anything feels rushed given all of the buildup across the past three seasons for these very moments in Season 8. There’s still no excuse for how bad the series finale is though. It’s true that most shows don’t receive positive responses to their finales. No one wants Game of Thrones to go away. Yet, the final episode is so bad. It’s the worst episode of the entire show. Over the course of its duration, Game of Thrones has been an absolute masterclass in filmmaking, storytelling, and character development. Season 8 will not be remembered for anything but its negatives. While the show will still be honored as one of the greatest shows ever made, there will always be a bad taste left in the mouths of fans after this horribly misguided and messy final effort.