For those who are unaware, there are ten Hellraiser movies. No joke. While it’s not uncommon for horror franchises to accumulate sequels the way their killers establish a body count, it’s crazy to think that Hellraiser has entered double digits. Beginning with the original in 1987, only four of the ten films made their way into theaters. Since Hellraiser: Inferno in 2000, each installment has been a direct-to-video release. The newest entry to the gory series is Hellraiser: Judgment which actually hits stores today.

For years, it has been rumored that a reboot of the original film was planned. At one point, it was even thought that Clive Barker, the writer of the original novel, The Hellbound Heart, and writer/director of the 1987 film, would helm an official reboot. Of course, that hasn’t come to fruition and, instead, films like Hellraiser: Revelations and Hellraiser: Judgment have been made. This is mostly because Dimension Films is required to release new films in the series to keep the rights to the Hellraiser name. Regardless, writer/director Gary J. Tunnicliffe intended for Judgment to be a legitimate sequel instead of an indie film with the Hellraiser name thrown onto it like many of the other direct-to-video releases.

The film starts off with a new Cenobite character named The Auditor, played by Tunnicliffe himself, interviewing a potential victim, Carl Watkins (Jeff Fenter). As The Auditor addresses the details of Watkins’ fixation on children, judgment is passed onto a few other new characters including The Assessor (John Gulager), The Butcher (Joel Decker), and The Surgeon (Jillyan Blundell). The collective Cenobites take their turns punishing Watkins and he’s eventually slaughtered. Meanwhile, detective Sean Carter (Damon Carney), his brother, David (Randy Wayne), and their new partner, Christine Egerton (Alexandra Harris) are trying to track down a serial killer who chooses his victims based on the Ten Commandments AKA the Preceptor killings.

Let’s start off with the good things about Hellraiser: Judgment. The first half hour or so of the film is actually quite decent. These latter era films in the series haven’t done a lot to instill hope in a total resurrection of what made the original film so great. We know that pain is pleasure to the Cenobites but have never really seen how they inflict pain on their subjects. Tunnicliffe provides a little insight here. Basically the victims are assessed and dealt with accordingly by the otherworldly monsters. The Auditor is a really interesting character that we’ve never seen before in a Hellraiser film. He doesn’t necessarily pass judgment on his subjects. He simply types up the information that he’s given as they speak. If the person is worthy of their potential sentence, the Cenobites make sure that he/she is butchered accordingly. 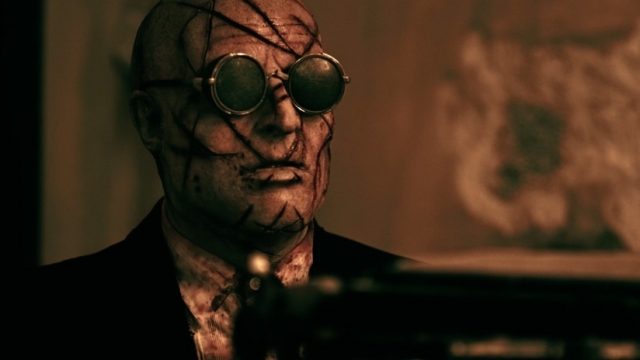 For the first eight Hellraiser films, Doug Bradley played the iconic Pinhead. In this film, Paul T. Taylor takes the reins after Bradley declined to return. Taylor does a decent job even though he’s not the main focus. Again, The Auditor is definitely the standout character. Also returning to the series are the Stitch Twins (Blundell and Lindi Simpson) and The Chatterer (Mike J. Regan). While it’s certainly awesome to see The Chatterer back as he is one of the most beloved Hellraiser characters, he’s also a minor letdown. When he’s onscreen, you hear his teeth chattering but you can easily see that they are not moving. It’s a small issue but, if they were able to make it convincing in the first two movies, why can’t they do it here?

The production design and music is actually pretty decent for a low budget film too. The house at 55 Ludovico Place where the Cenobites hole up is dirty and dingy as it should be. It kind of looks like something out of a Nine Inch Nails music video. Even the music that plays over the opening credits is like a warped NIN track. Pinhead’s lair is fitting for him with the steely blue tones reminiscent of the first few films. Though, does anyone else miss locations like the attic from the original or Leviathan’s labyrinth from Hellbound: Hellraiser II? The filmmakers do a decent job here but, as one could expect, nothing about this movie tops the first two. 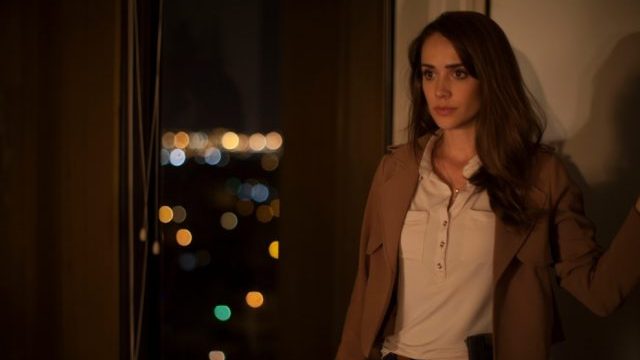 Now, we come to the biggest problem with Hellraiser: Judgment. The police procedural aspect of the story is so stock. It’s essentially a ripoff of David Fincher’s 1995 film, Seven, but not nearly as good. The characters of Sean, David, and Christine are lame and you simply don’t care about them. The plot has very little flow as the detectives get called to random crime scenes of the Preceptor killings. The best thing that happens in regards to this part of the story is when Sean finds himself being questioned by The Auditor. This is another instance where the best part of these direct-to-video releases are the Cenobites themselves. It’s unfathomable that all of these filmmakers avoid giving fans what they want for lame police procedural movies. Yet, it happens nearly every single time a new Hellraiser film is released.

As ridiculous as it has been over the years for remakes and reboots, the Hellraiser franchise desperately needs a fresh coat of paint. Dimension pumping out new, low budget schlock just to keep the name isn’t doing anyone any favors. Fans haven’t been satisfied and it’s hard to believe that Dimension is even making any money this way. If they’re not going to do anything constructive with the series, let someone else have a crack at it. While Hellraiser: Judgment isn’t the worst of the series, it’s pretty uninspired beyond its new Cenobite characters. If nothing else, at least it seems like the director’s heart was in the right place but that still doesn’t justify this new entry into a floundering series.